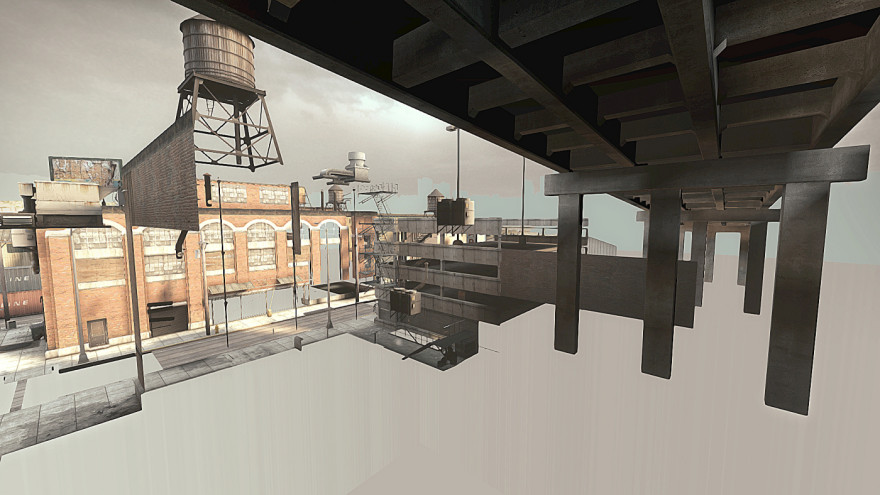 Robert What wants to take Counter-Strike: Global Offensive (2012) back from the people who made it—yes, Valve. Despite the multiplayer first-person shooter proving enormously popular, What wants to see it undergo a conceptual transformation; from a series of static, made-to-look-real maps made for online competition to “dynamic spaces of artistic contemplation and social interaction where interesting events spontaneously emerge.”

He has a theory but, before that, he has a gallery of tailored images called the “CS:GO Noclip Exhibition” that attempts to unravel it. In total, the gallery includes 396 screenshots from around Global Offensive‘s many maps, all taken and curated by What himself. These screenshots make use of the “noclip” command that lets you float and fly around the gamespace, passing through the walls and barricades that typically keep players boxed inside the map.

Due to this, most of the images reveal the surrounding voidspace that always lingers just out-of-sight beyond the veil of videogame worlds. The way he frames this emptiness is often striking. Walls that were once brick are now transparent to reveal a magnificent grayspace. Terraced houses stand lonesome and fragmented against an endless hue. Entire industrial buildings are revealed for their criss-crossing complexity when viewed from underneath without a floor. It looks like a world at its end as it is shredded towards non-existence.

“This project conceives the voids between surfaces (andor surface-voids) not only as a postmodernist critique of digital architectures, but as a means to rethink relationships between subjects and virtual objects of architecture and suggest other forms of open reading,” writes What. He adds that using tools like noclip to explore virtual maps beyond their perceived borders gives rise to “unexpected hyperreal delight / an uncanny space of displacement.” In becoming this type of virtual tourist we are able to better understand the blueprint of a gamespace. Some players use this information to find exploits that allow them to cheat the system when playing online matches. But What wants us to go further: to move beyond the constraints of the system’s rules entirely as Valve has written them and find a new type of playful expression.

This desire is discovered in What’s previous writing on “Thinking beyond game maps and levels” as well as his notion that game engines should be “Play Enablers” that service “player based design.” In essence, What wants to see game engines shift away from being used to create deliberate and restrictive games shipped as products, and towards facilitating accessible and more immediate expressions of play. It might seem that he’s asking for the creation of the Source Engine-based sandbox creation tool Garry’s Mod (2004) but he’s clearly aware of its existence and seems to be suggesting something more. In any case, “CS:GO Noclip Exhibition” demonstrates how applying this thinking might change an existing videogame.

“Imagine being able to position oneself anywhere in a game map and witness cool strange events occurring while you customize the immediate area with art objects, even adjust the ambient tone to fit your mood,” What writes. “That is, to move away from static maps to constantly moving systems of artistic expression, where how you play–ie. aesthetic style–becomes far more important and interesting.”

You can see some of the images of CS:GO Noclip Exhibition here and follow the links on that page to see the rest.