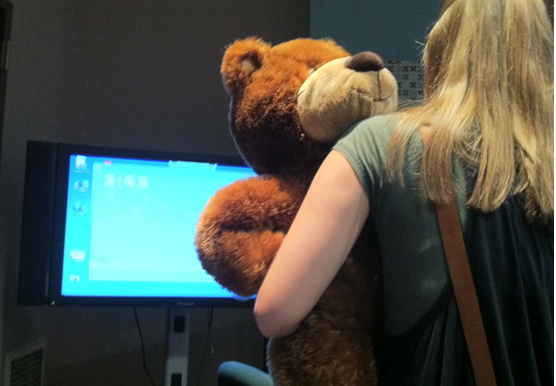 Professor Lindsay Grace of Miami University has started a Kickstarter campaign to fund his game Big Huggin’. Since the success of Double Fine, there are at least 1.7 trillion other campaigns on Kickstarter to fund games, so typically the emergence of another one doesn’t merit any sort of conversation.

Is it the kindest, cuddliest videogame ever?

Your controller is a stuffed bear. In the pantheon of controller peripherals, which tend to vary from a gun to a slightly larger gun, the Big Huggin’ bear is a spectacular outlier. You squeeze this beautiful doll and a bear on screen will respond by jumping. Time your loving embraces correctly, and this virtual bear will advance.

Grace’s goal with this Kickstarter is not to make this game available to the general public.

This project will help fund the production of bears and the game. With more bears I can expand where the game is offered. Long term, I’d like to bring them to children’s hospitals, spaces helping people with autism, and anywhere a hug is valued.

In case you need a review, Big Huggin’ is:

-A game that is designed to be played by sick children
-A game in which your controller is an adorable plush bear
-A game that bears the tagline “Why isn’t there more hugging in games?”

If your heart isn’t melting right now, then you are a broken human being and I don’t want to be friends with you.