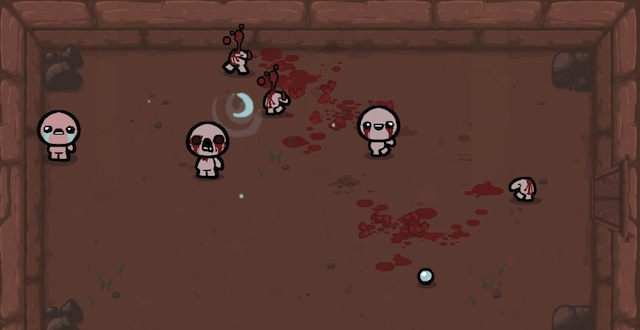 If Abraham had killed Isaac on that mountaintop things would’ve been very straightforward: God asks man to kill son. Man kills son. God is happy. Man, less so. It gets thorny because God tells Abraham to stop at the last second. Abraham, stalwart in his faith before, must have thought that God, his own father in a sense, was, to say the least, a bit out of line. To sacrifice his only son he had left. Poor Isaac, Abraham’s only son, forever scarred, his relationship with his father irreparable. The story is supposed to be, in context, about the shift away from paganism and human sacrifice. About the benevolence of this new God.

The game is the beginning of the rest of Isaac’s life.

The Binding of Isaac, by Florial Himsl and Edmund McMillen, is the latest interpretation of the story. An intro explains how Isaac’s mother shifted from well-meaning single parent to a deadly Bible-thumping zealot. Told by the televangelist voices in her head that Isaac’s obsession with Dungeons & Dragons is evil, she goes to kill him. Isaac escapes to the basement in the hopes of escaping and, perhaps, defeating her. McMillen and Himsl bring the subtext of the original story up to the surface: Parents can cause a world of hurt.

Isaac is a twin-stick shooter (one set of arrows to move, another set to shoot). This is a first for McMillen, who made his name in platformers (and who has already proven himself with classics like Super Meat Boy and the under-appreciated Time Fcuk). Each time you play the game, elements are randomized. Power-ups, for example, will appear in one game, but not another. These include pharmaceutical pills that can do as much harm as good, or a Tarot deck that gives arcane powers (notice that it’s only after Isaac’s mom tries to kill him that he turns to the dark arts). As a game, yes, the variety means I’ll encounter new enemies and imaginative unlockables every time I play. A sense of discovery and novelty drives me to play again. This also means that the symbolism and metaphors in the game come in and out of focus, new meanings and associations happening by accident. In one session I got “Mom’s Panties” and “Mom’s Bra.” Each has an in-game benefit to Isaac’s stats, but as a player I imagined Isaac as a closeted kid who felt uncomfortable in a male body. I wanted to hug him and tell him that it gets better.

McMillen’s aesthetic has never been a personal favourite. Blood, guts, gore, and bodily fluids coat all of his games. Spewer, for example, has the protagonist propelling itself across the stage with vomit. In most of McMillen’s games, puke and gore are played for laughs, but here they’re accompanied by a dark undercurrent. Isaac doppelgängers roam some stages, bleeding from their eyes, all the more sickly because of their smile. Isaac fights off enemies with his tears, a game mechanic wrapped up in a metaphor if I’ve ever seen one. The less said about the womb stage the better.

Or maybe not. Binding is obsessed with origins. The game is a pastiche of old-school ideas. The hearts and dungeon styles are pure Zelda. The random level generation harkens back to Rogue. There is an enemy that pays homage to Bomberman. I have a sneaking suspicion that the trapdoor hidden under a rug that’s mentioned in the intro is a Zork reference. To say nothing of the original story from Genesis, the first book of the Old Testament. The Binding of Isaac isn’t really about Isaac’s mother trying to kill him. The game is the beginning of the rest of Isaac’s life. Will he permanently be the troubled kid cowed by his mother, or will he become his own person, able to deal with his fears in the real world? It’s a troubling metaphor, and when I read people writing that the developers need professional help, I point at this game and say, “This is therapy.”