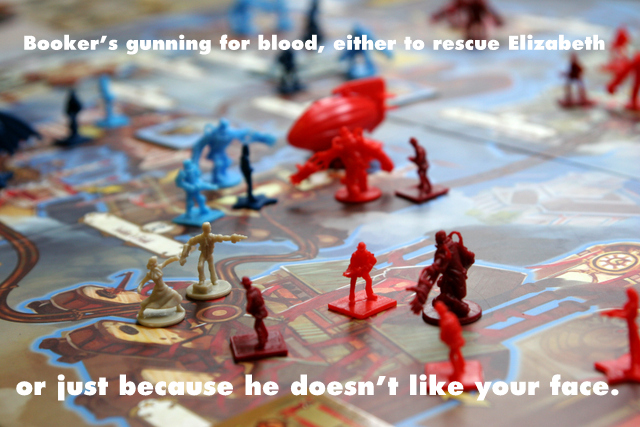 To enjoy the board game BioShock Infinite: The Siege of Columbia, you needn’t be familiar with the videogame it’s based on. Probably wouldn’t hurt, but I can’t speak to that, since I haven’t played the videogame. The narrative basics are familiar to me via internet consumption though: A guy named Booker and a gal named Elizabeth run around a floating island messing with the powers that be. In The Siege of Columbia, you are those powers.

The first crack of the box this game instills a sense of pride and a desire to protect.

It’s a beautiful set. The first crack of the box this game instills a sense of pride and a desire to protect. The players each cherish their starting slice of Columbia as the game pieces are laid out: the thick colorful board; varied dice in a magisterial sans font; many firm and unflappable tokens representing alarms, strongholds, and turrets; and elegantly detailed (though plastic and mostly monochromatic) mini-figure soldiers. Before the full-color rulebook is even flipped open it’s clear why you and the other player are vying so vehemently over this floating island, scheming not only to protect your meticulously detailed units and lavish locations, but to also collect and build further.

The Siege of Columbia is optimized for a personal conflict between two leaders and their factions: The Founders and the Vox Populi (Though there is a four-player mode that functions well enough, it’s two-to-a-team, so the setup remains the same). Statistically, these groups are on even footing; ideologically, both groups fervently believe they know what’s best for the people of their floating island. To win they must assert their will over the other player. They must be eradicated for the good of the people.

They must be eradicated for the good of the people.

However, in the shadows of Columbia there are two gray figures hungry to disrupt your plans: Booker and Elizabeth. If the you and your opponent can agree on anything, it’s that these two terrifying agents of chaos that should be eradicated. They’re non-player controlled entities built into the narrative of a session, and they have no respect for authority. Random world events and something called the Elizabeth Timeline combine to randomly disrupt either player’s concrete strategy or sense of centralized power; together, these elements form a sort of third player that neither faction can control or reason with.

Plaid Hat has created a fairly solid system wherein two leaders manage their resources, claim territory, and skirmish, but it’s the way the game conspires to ruin you that really shines about The Siege of Columbia. Sometimes Booker and Elizabeth will drop in on a location not looking to start any trouble, just sneaking around; you can pick that fight if you want. Other times the choice isn’t yours: Booker’s gunning for blood, either to rescue Elizabeth or just because he doesn’t like your face. He often influences votes as well, turning the tide for the second-place player. He’s tenacious and Elizabeth’s no slouch, so their meddling is not easily prepared for.

You win The Siege of Columbia by claiming ten Victory Points, or having the most of these points when Elizabeth reaches the end of her timeline. Defeating Booker doesn’t directly help you do either of these things, you still feel compelled to; often the most tactically sound actions are superseded by emotional impulses. As you play you start to feel justified in your actions, violently wresting neutral territory locations and cutting down enemy units. And, if Booker stomps onto your holdings, and you manage to defeat him, your motives are proven pure and successful as you obliterate the other player. The further you conquer, and the more entrenched your army becomes, the more you will risk in order to defend your claim. Booker is a wildcard, and the ultimate threat to power here.

It’s compelling that the players are given the chance to experience things from the point of view of the Empire and the Rebellion, so to speak. A sense of the totalitarian emerges as one plays The Siege of Columbia. Neither faction is innocent. You’ll both curse the names of those uncontrollable anarchists who blew up your stronghold and praise them for futzing up the invading horde at your doorstep. And you’ll know that however ruthless your actions, deep in your autocratic heart, history and Victory Points will absolve you.