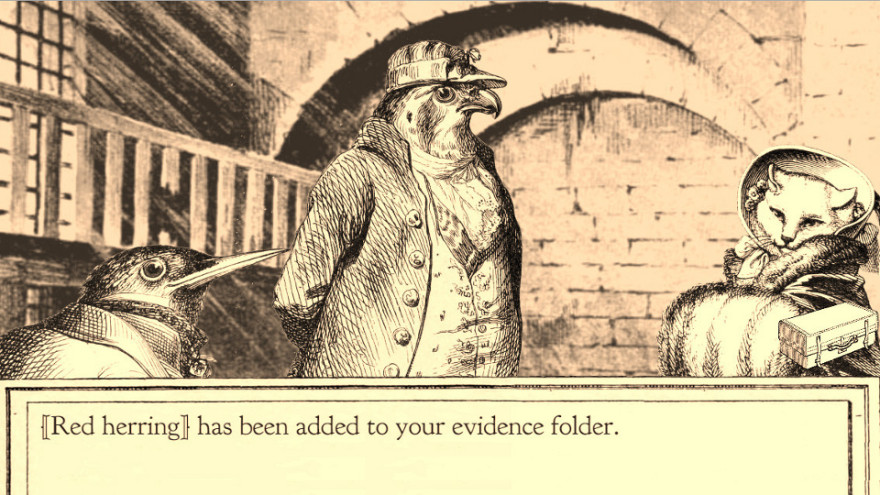 You might remember Aviary Attorney as the only lawyering videogame that features a crack team of attorneys straight out of Animal Farm. Set in 1848 Paris, the game only uses public domain drawings from that time to depict the trials and tribulations of bird lawyer Monsieur Jayjay Falcon. All characters have been lifted from Scènes de la vie privée et publique des animaux (Scenes of the Public and Private Life of Animals), by French caricaturist Jean-Jacques Grandville.

As Aviary Attorney creator Jeremy Noghani told Kill Screen after the Kickstarter launched a year ago, “It was amazing how much of the humor carried across from 170 year-old drawings.” Since then, the Sketchy Logic team has created a colorful band of characters for Monsieur Jayjay Falcon to lawyer.

For example there’s Juan Querido, the Prince of Spain, who is accused of murder and conspiring to kill the king of France. Juan is a suave, collected fox with a rye smile permanently plastered on his lips. Meanwhile his majesty King Louis-Philippe of the House of Orléans appears to be a no-nonsense penguin with a strong sense of propriety and dignity. In the devblog, the entry introducing King Louis-Philippe of the House of Orléans (the first of his name, protector of the realm) is filed under category NothingBadEverHappensToFrenchKings—which sounds less than promising for the poor penguin’s head.

Unfortunately, all they have is you, a bird-brain

In Aviary Attorney, you must take on a a variety of clients who require excellent bird lawyering throughout Paris. Unfortunately, all they have is you, a bird-brain. You’re caught in the middle of a French revolution, and the way you play affects the outcomes of the case. From courtroom drama to dangerous sleuthing, you must out fox the fox, out caw the crow, and out best any other animal who stands in your way.

The game will be released on December 18th on Steam for Mac and PC.