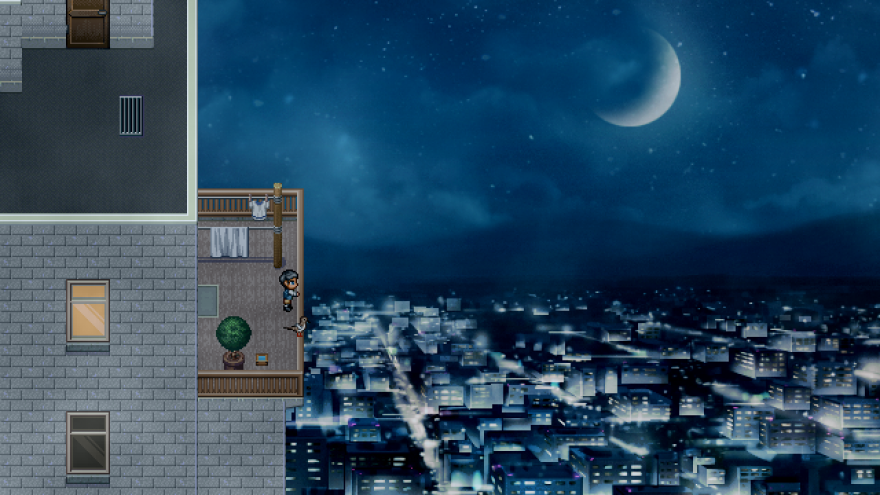 “Have you played To The Moon?”

This is how every conversation I’ve had about Kan Gao’s 2011 RPG Maker XP game To The Moon has been initiated. It’s the secret handshake that opens the door to a hidden subculture. Nearly everyone I’ve spoken to about the game cried while playing it. I’ve even used it as an ice breaker to find common ground between myself and a stranger.

The significance of this fact is in its consistency. Either whispered the lyrics of a potent rain dance into the digital fabric of To The Moon, or he has found the answer to affective storytelling in videogames. It turns out that neither of those scenarios are true.

“I’m really glad that there are those who can connect with the storytelling in some of my games,” told me. “But to be honest, I’d actually be very surprised if I really do have a keen understanding of many of these things because, at the risk of coming off overly verbose, I’m still kind of a noob [in real life].”

It’s obvious to me that isn’t just being modest. What he means by that last turn of phrase is that he’s not much of a sociable person. This comes as no surprise when you consider that Kan’s strength is in telling stories (he’s also a gifted composer) and that, speaking in general terms, writing tends to be an activity favored by introverts—no surprises that I am, myself, an introvert and a writer.

This isn’t necessarily a negative trait to have. It’s quite the opposite, in fact. It’s been proven that introverts tend to listen more than they talk. Swiss psychologist Alice Miller tells us that “[l]earning is a result of listening.” She also attributes having a human interest in what someone else has to say with increasing one’s own empathy. fits the mold perfectly, and is well aware of how this aspect of his personality is intrinsic to his method of storytelling.

“I guess because I don’t talk much, I spend a lot more time observing and trying to see things through others’ eyes, which helps with empathizing with folks. I think that’s one of the keys, to synchronize with others and make things standing at where you imagine they would be when the time comes.”

Indeed, perhaps the biggest success of ‘s stories is in how they are built around empathy. In To The Moon we use technology to live through the character-shaping memories of Johnny Wyles as he lies in his death bed. Our entire mission is to understand things from his perspective by actually seeing through his eyes so that we know why his dying wish is to go to the moon. We see what he sees, and hopefully feel what he does, too.

It’s been three years since To The Moon was released, and it has picked up countless praise and plenty of awards since. is now preparing to release A Bird Story on November 5th. It’s an hour-long adventure that mixes dreams and memories while following the story of a boy who finds an injured bird. This boy actually grows up to be the elderly patient we’ll be trying to grant the dying wish of in the second episode of To The Moon—it’s a short, bridging episode but is also self-contained.

What’s slightly surprising about A Bird Story is that it’s wordless. Being made in RPG Maker, ‘s sci-fi dramas don’t have the luxury of subtle gestures—they’re conducted by little 2D sprites. Yet, his method of storytelling is subdued, and so the dialogue fills in the gaps that the limitations elsewhere create.

Upon finding out that there would be no dialogue, I thought of the many RPG Maker games that have sprites jumping around, and that employ anime’s huge eyes to make emotions visible. I couldn’t see this working with ‘s style even if it is, as he says, a “very transparent story,” making it possible to “opt out tell for show.” Luckily, while he has had to make some necessary stylistic choices, he seems to have found a happy balance.

“I tried my best to make it lively and assorted despite the lack of dialogues, mostly via more short musical cues and lots of tiny sprite animations. To the Moon had about 10 character sprite sets for the 2 doctors, whereas A Bird Story has over 100 for the boy and the bird. That being said, a lot of them are extremely minor, such as changes in the eyes (which are about 4 pixels wide to begin with).”

admits to being a fan of silent shorts for how they’re able to communicate so simply but hit on something universal. It’s this that he’s hoping to achieve with A Bird Story, just as he did with To The Moon, albeit with a slightly more complex delivery.

Important to note is that his effort is one that runs up against the mo-capped faces of actors that are becoming increasingly prevalent in narrative-driven videogames. Those behind these games speak loudly and prophetically of the technology they use, getting up on stages to transfer their belief that creating empathy in videogames requires all of these expensive advances.

“I think most people in the world aren’t that different from each other in the core, in one way or another. It’s just a matter of finding a common ground to connect as many of us as possible, and try to tell it in a way that reminds us of that connection.”

You can purchase To The Moon on its website. A Bird Story will be available on Windows, Mac, and Linux on November 5th.