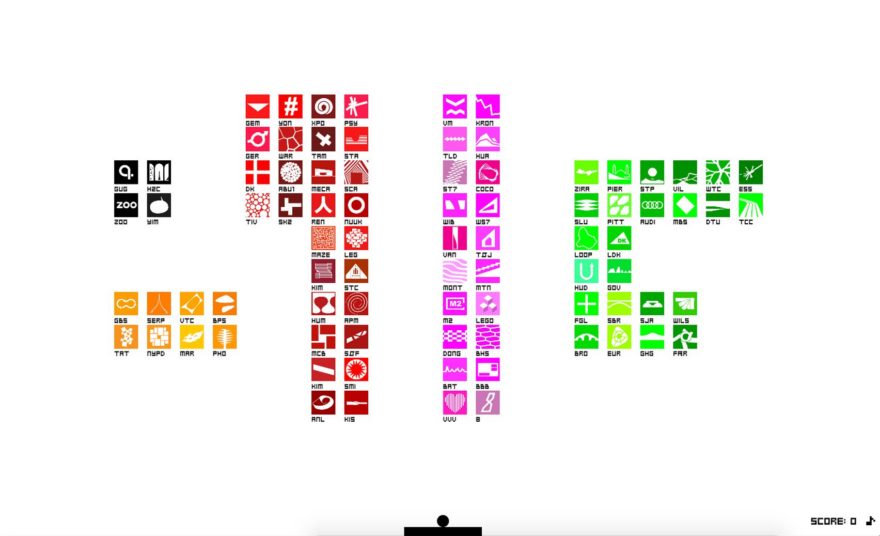 Bjarke Ingels’s portfolio can now be viewed as an online game called Arkinoid, which is an updated version of the classic (and similarly-named) arcade game, Arkanoid (1986). Of course it can—it was only ever a matter of time. That is meant as a relatively value-neutral statement, but inevitably it can also serve as a sort of Rorschach test for how you feel about the Danish architect. The whole thing is at once playful, pointless, childlike, simplistic, amusing, and glib, and whatever combination of those things that you see in the game probably also applies to the Bajrke Ingels Group’s work.

All of which is fair enough. A game in which you bounce a ball off the icons for Ingels’ various projects configured in different layouts, which is all Arkinoid is, cannot be expected to contain deep rhetorical powers. But the whole site, amusing though it may well be, hints at the discursive limits of Ingels’s approach to architecture: Can all this surface cheerfulness really explain every project the increasingly omnipresent company takes on?

“Arkinoid brings back the good old nostalgia by reinterpreting the famous classic Arkanoid, BIG style!” the firm told Dezeen. “The BIG version lets you destroy our website icons,” it added. “The icons are reconfigured in different ways depending on the level, and each level gets more complex and harder to complete, kind of like architecture!”

This sort of rhetorical strategy is typical of BIG, a firm that has built models out of LEGO and has previously proposed building complexes that resembled roller coaster rides. The upside to this approach is that it can make architecture seem exciting and accessible, which other practitioners sometimes struggle with. The cold remove of Rem Koolhaas, for instance, is less likely to win over average members of the public. The problem with this approach, however, is hinted at in Mark Binelli’s recent Rolling Stone profile of the architect:

Ingels’ savvy communication skills, his ability to sell potentially transformative design concepts like he’s pitching a roomful of first-round investors on a new app that’s going to totally disrupt going to the dentist, has cut both ways when it comes to BIG’s reputation. “Bjarke is the undisputed king of the architectural one-liner,” says Oliver Wainwright, the architecture critic of The Guardian, “but it sometimes leaves you wanting more to chew on. Most architects will reach for much more profound metaphors. They’re reluctant, I think, to spell out their process in such a direct and transparent and, yeah, childish way.”

Looking back at Yes Is More, Ingels says, “I think we did ourselves a little bit of a disservice. I mean, it was actually quite well-received, but I think it made it a little bit easy for our critics to dismiss what we do as cartoonish, because literally we made a cartoon. But, you know, the haters will hate, right?”

If the comic came off as a bit goofy and unserious, Ingels’ own habit of behaving as if he’s auditioning for an architecture-themed show on Viceland has done little to help his cause. It wasn’t enough to name his company BIG; he revels in the fact that its Danish Web address is big.dk. “Who doesn’t like a big dick?” he asked over dinner in Las Vegas. “Men like it, women like it!”

Arkinoid embodies all of these tensions. It’s proudly childlike and unserious, but one is never entirely sure if that matters. Architects can be fun, too. It is not a particularly interesting game on its own merits—the Block Breaker formula is not meaningfully improved with BIG icons—but it provides a space for reflecting on BIG’s work.

The intentional emptiness in the game mirrors how I have come to feel about Ingel’s original tagline: “hedonistic sustainability.” The architect’s early projects cashed in on the idea that environmentally sustainable design needn’t be equated with sad, unhappy lives of scarcity and sacrifice. This, up to a point, is true. But what happens when real trade-offs have to take place, when the boundaries of “hedonistic sustainability” are exceeded? The lack of interesting choices in Arkinoid ultimately mirrors the discursive limits of Ingels’s cheery futurism.

This issue is also reflected in Leopold Lambert’s criticism of Ingels’s mega-block-like proposal for a New York City police station:

In February 2016, the New York City Department of Design and Construction officially commissioned the design of the future 40th Precinct Police Station to BIG, one of the current most successful architectural firms in the world, mostly known for their didactic (if not patronizing) way to explain their projects to clients and the public, as well as for the ‘hip’ pictorial characteristics of their buildings. Given the consistent lack of concern from this architecture office for any political issues (which is itself a political positioning), we cannot even accuse them to be disingenuous when they write “the 40th Precinct will also house a brand new piece of city program: the first ever community meeting room in a precinct. With its own street-level entrance, the multipurpose space will contain information kiosks and areas to hold classes or events, encouraging civic engagement with the precinct”

I don’t think that this is disingenuous from my end to associate the existing Harlem 28th Precinct building with the one proposed by BIG a few miles North in the Bronx. Of course renderings tend to polish the aesthetic of a yet-to-be-built architecture, but this new building will have a lot of difficulties hiding the bunker characteristics of its architectural typology. I don’t think that this is disingenuous either to assume that a “a community meeting room” in a building like this one will not experience a strong affluence, regardless of the “civic engagement” of the neighboring communities — especially when such a civic engagement might consist in the protection of locals against the police.

The problem here, as in Ingels’s work, is not its didacticism per se. Being able to explain yourself to the public is an admirable skill. But what, exactly, is being explained? All of Ingels’ metaphors and games are compelling right up to the point where they have to reckon with imperfection or the inability to have it all. That is something that optimism (or techno-optimism, a major theme in the Rolling Stone profile) cannot solve. It is also the sort of discursive void that characterizes Arkinoid as a game.

You can play Arkinoid for yourself right here.