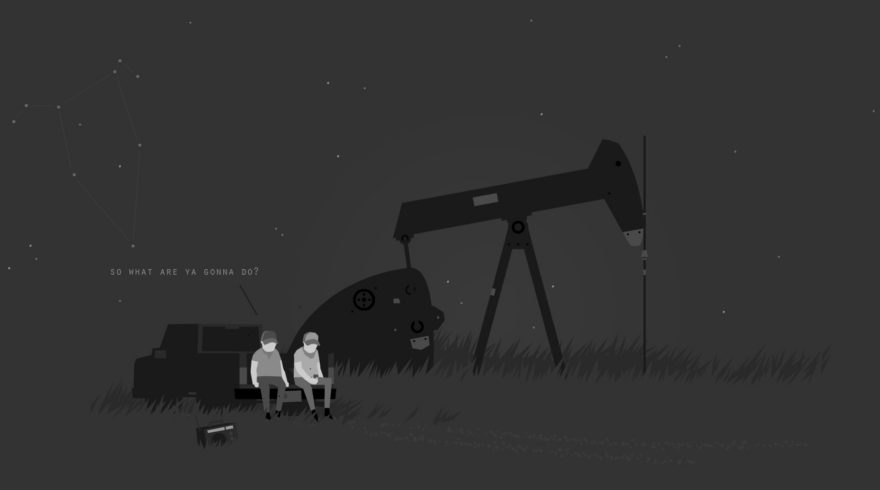 I’ve lived my entire life in Texas. I graduated high school in a small town on the south edge of Fort Worth, Dallas’s dull little brother. There’s a suffocation, growing up in a place like that, a smallness; most people you know have had families who have been here for generations. They’ll reminisce about the farmlands turned into strip malls, spending an hour or two talking about the storied and sleepy history of some decrepit farm road crawling out into the boonies. No one really leaves a place like this. The edges curve into themselves, creating an invisible gravity as oppressive as the Texas heat.

The particular boundaries of that sort of life aren’t often captured by videogames. It’s too mundane, too provincial, too tied to a particular type of lifestyle. The Mystic Western Game Jam, put on by the Austin-based indie collective Juegos Rancheros, which counts Brandon Boyer and Rachel Weil among its leadership, might do a little to change that. If nothing else, one of its entries, Black Gold, certainly does.

Lean back in the bed of a pickup truck, look at the stars, and sip on something cold. A Lonestar, in all likelihood. Study the way the sky never seems to end out here, the white on black of stars and the occasional motion of a low-flying military helicopter from some nearby base. Talk about nothing in particular.

Black Gold, created by Conor Mccann with audio engineering by Devin O’Brien and music by Chris Schlarb, is the sort of simulation that devotes itself to capturing a feeling. The wistful loneliness of being at the edge of a small town like mine, looking up, wondering where to go next. It’s a game that knows what it’s like to feel the pull of familiar places—the corner store across the street from the high school where you got sodas before Driver’s Ed, the dingy Southern Baptist church with no steeple where you snuck your first kiss—and it knows what it feels like to want to rage against them, to escape.

There are hints of plot, a dead father, a potential move, a rebirth. A machine pistons behind the two men who are Black Gold’s stars, pumping something precious out of the ground. Along the freeways in Texas, you can see towers of wireframe machines, natural gas lines and oil refineries scattered among the scarred plains. At night, they’re covered in flood lights, blinding like a vision of God.

There are even surprises, here, a notable amount of depth for a game that takes no more than five minutes each playthrough. See if you can find the drug trip. But above all it is a simple game about a conversation that says nothing much, spoken in half-intoxicated ellipses, full of wonder and sorrow and summer sweat.

I left my hometown as soon as I could. I had this profound fear: if I stayed, I would never leave, and I would be the smaller for it. I went South, to San Antonio, near the epicenter of the wet and hot of Texas Hill Country. I remember spending a lot of time drinking with friends, leaning out the balconies of college dorm rooms, talking the philosophical nonsense that’s best left for after the fourth beer.

Black Gold manages to capture a bit of that, too. I remember the abstract spirituality of it. Looking at the sky and wondering at how damned big it is. The sunsets down there fill every inch of it with color. We would watch as they faded into the leafless trees, our tired eyes following as the blackening sky reached down to the horizon line and devoured it whole.