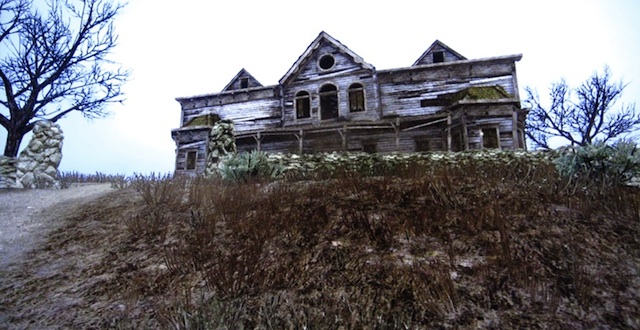 As a rule of thumb, ghosts don’t inhabit modern buildings. They are confined to antebellum homes, moldy hotels, condemned mines, and ghost towns out West. While I see the connection, it makes no sense to me that ghosts would inhabit an old house in the desert country of the Western game Red Dead Redemption. There is no room for the supernatural in technology. You will never receive a scary email from a ghost. Ghosts don’t broadcast on Foursquare that they are currently haunting Starbucks. In videogames, ghosts are simply characters that can disappear. It seems impossible for a virtual space to be literally haunted.

The house in question is a mansion located in Tumbleweed, the ramshackle frontier town where you rescue Bonnie from being hanged. It is a dilapidated, two-story wooden building, with a front porch, a fireplace, a large balcony, and two staircases. I had been there before, while playing through the story, but didn’t notice anything out of the ordinary. It was the middle of the day—both in real-life and in the game—when I went back to look for paranormal activity. There was an outlaw hiding in the basement, which gave me a scare, but, besides that, nothing happened.

What do people mean when they say Red Dead Redemption is haunted? It’s not that a poltergeist lives inside the physical copy of the game, I don’t think, like a nerdy version of the videotape from The Ring. However odd, this scenario is not totally unheard of. Similar claims have been made about a cursed copy of The Legend of Zelda: Majora’s Mask and a fake Pokémon bootleg called “Black Edition.”

A better answer is that Rockstar hid an Easter egg—a clever secret for players to find. But more than likely, the game is just broken. Glitches are a dime a dozen in Red Dead Redemption, and if the game malfunctioned in an already spooky place like Tumbleweed’s deserted mansion, it could be a bigger freak-out than the Red Room from Twin Peaks.

More curious than the mansion itself is why videogames generate urban legends in the first place.

I figure it’s an outright lie. Red Dead Redemption has a large body of ghost stories and folklore and myths, which naturally attracts tabloid stories. A few are real, but most are highly questionable. There are jackalopes in the game. I’ve skinned one. Yes, zebras can be ridden in Mexico. You can, in fact, bag a Sasquatch.

Other legends are harder to verify. Flying reindeer are most likely faked, but the UFO sightings look believable. Maybe? A YouTube commenter explained, “It’s a glitch. Sometimes if you hit someone with dynamite, his hat launches to the top of the map and stays up there.” But who really knows? Once, I spent an entire week tracking the Donkey-Woman with no luck.

The Red Dead Wiki has a long list of spooky things that can happen at the mansion, but most of them are easily dismissed as buggy code. It says that you can hear footsteps and voices and a barking dog—there’s even a rabbit—although the house is supposedly abandoned. It says the lights flicker on and off and the walls change color. The Wiki even says that the devil himself appears in the cemetery behind the neighboring church (a claim that locals likewise make about a patch of earth called Devil’s Tramping Ground in rural North Carolina).

But after staking out the place for a good hour, the creepiest thing I saw was some nasty texture pop-in, where the wallpaper would suddenly appear before my eyes. I went outside and climbed up on the windmill, surveying the land for the rumored hell-dog. I saw absolutely nothing.

The ghost hunt was a bust. More curious than the mansion itself is why videogames generate urban legends in the first place. I have my own theory on this. It shows that a game has been assimilated into culture, to the point where people are willing to make up bullshit about it, which might be the highest achievement of all for a game. In the classics, this sort of rumor mongering happens all the time.

For instance, take the Legend of Zelda series, whose vague symbolism has caused certain fans to formalize earnest pop Kabbalah, like one theory I found on GameFAQs: “The Triforce represents a system of beliefs and ideals. Each of the three pieces represents some certain philosophy,… guiding principle, etc.. What the people who would try to propose a fourth piece need to be able to answer is: What is missing?”

Take Super Mario Bros., where jumping over the flagpole was speculative fiction; but being sucked into a wall and hopping down a warp pipe to a strange Minus World—like falling through a portal into John Malkovich’s head in the film Being John Malkovich—turned out to be true.

And don’t forget about Pokémon, where some misguided youth legitimately question if Pikachu and pals exist in real life.

I decided to go back to the house one last time before giving up. This time, something unexplainable and kind of terrifying happened. I don’t know whether to say it was a glitch, a designed element, the ghost in the machine, or all of the above. But after a few minutes, I did hear voices. I ran through the halls, looking for ghosts, but the rooms were empty. In the upstairs bedroom, my character started freaking out, pointing his shotgun at thin air and screaming, “I’ll kill you.”

I went downstairs, where I came to a door I hadn’t noticed before. I tried opening it, but it was locked. I tapped harder on the button, as if I could open it by force, and suddenly everything went black. All I could see were little squares of outside light through the busted windows. I stumbled around in the dark for a few minutes—your eyes don’t adjust like they do in a natural environment—and found myself standing in front of the same door. Again, I tried opening it, and again it wouldn’t budge.

There is no room for the supernatural in technology.

I couldn’t see anything, as I was still facing the door, but I heard a voice right there. So, I decided to try to shoot through the door, and a body fell dead on the floor. I turned around and looted it, just to make sure that it had really happened. At some point, a cluster of bats erupted from a hole in the ceiling. There in the blackness, I saw a pale figure standing, which was barely visible, but clearly staring at me. I killed it too.

I moved forward, into an unknown corridor of the house, where two ghostly men, each dressed in gentlemen’s attire, waited. One of them said something to the extent of “You’re going to die.” And, sure enough, I did. They started firing, and I was too weirded-out to do anything about it. My silhouetted corpse collapsed in a black lump.

One. If you look for ghosts long enough, you might actually find one.

Two. Don’t automatically be skeptical about things you hear on the internet.