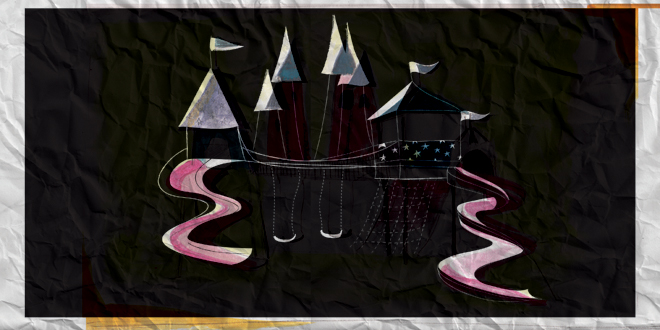 “The true object of all human life is play. Earth is a task garden; heaven is a playground,” says G. K. Chesterton, Catholic essayist, novelist, and poet.

I think about the implications a lot-about human life being most fulfilling and true when it is playful. These playful moments come not from feverishly accomplishing everything on my agenda, but from stepping away from work and into a rest-and allowing opportunities for appreciative play. It may take work to cause a kite to fly, but it’s the time afterward, when I watch the kite float in the air, when I pull on the string to see what will happen, that I feel that transition from task garden to playground. In kite-flying, stakes are minimized – a crash landing is an exciting event rather than a devastating one.

As part of what is known as the “Sermon of the Mount,” Jesus gave his own list of human achievements, cleverly framed to seem like a standard list of expectations and rewards. Instead, this list of eight “Beatitudes,” or blessings, manages to turn our tendency to strive for achievement on its head. The introductory “Blessed are the poor in spirit, for theirs is the kingdom of heaven,” is a spiritual directive to those fed up, disillusioned, and overwhelmed with the impossibility of spiritual success. It’s asking us to turn our focus away from accomplishing righteousness and perfection, and toward something else. It flies in the face of the typical religion-flavored legalism of the time. When applied to the concept of play, it flies in the face of our determination to excel against our fellow-players. It reminds us that it’s okay to lose. It’s okay to fail again and again, and it’s okay for others around us to do the same.

That introductory condition and result sets the stage for seven more Beatitudes, each rewarding a particular type of underperformance with a blessing:

Essentially these are achievements for the loser set-they reward the depressed, the understated, the have-nots, and the doormats. They reward those who seek to settle competition rather than win it, and those who find themselves on the business end of a crucifix or a gun for seemingly misguided beliefs. They reward failure and loss, not victory and perfection. They stand in stark contrast to the kinds of success-focused achievements that typically ship in today’s games.

Those of us who play videogames understand the significance of the incredibly satisfying sound the Xbox makes when an achievement is unlocked. It’s an understated pair of digital click-tones that are done playing before you realized they had started-perfect to instill in the player a Pavlovian response of satisfaction after they punching 100 enemies or finishing the next level. That two-toned bleep-bloop represents an explicit pat on the back that transcends the game itself, and bleeds into a broader world, if not the real world itself.

Essentially these are achievements for the loser set-they reward the depressed, the understated, the have-nots, and the doormats.

When the Xbox 360 shipped in 2005, achievements and the accompanying “Gamerscore” system were included as one feature among many. Any developer seeking a license to publish a game on the console was required to include achievements. In 2008, PC/Mac game portal Steam added its own achievements, and Sony added “trophies” to its PlayStation Network. All of these rewards were tied to a profile separate from the games themselves-tying achievements to a second identity that was tied to this hobby. Those who play games love being rewarded, so we craved something to show on our profile.

Many began to obsess over achievements, seeking out games that provided easy opportunities for tons of achievement points, and even I found them changing the way I approached my time playing games. I once bought Sonic’s Ultimate Genesis Collection, an Xbox disk full of old beloved games from my childhood.

But rather than playing them for fun, I found myself miserably marching through the steps it took to unveil all of the behind-the-scenes videos in order to unlock the corresponding achievement for such a task. I had to collect five yellow stars in Ristar. I had to get 20,000 points in Columns. I had to collect 20 magic powerups in Golden Axe. I never did finish unlocking the achievement, which was named “No Life.” It was an apt name that illuminated the difference between playing these games with a sort of mind-numbing checklist in mind and playing them with the unassuming winsome attitude of a child. Even the games from my childhood have grown up, and they’ve got some chores for me to do.

With all of this work making its way into our games, are we even playing anymore? The Beatitudes point to a truth that has been reinforced by scholars like Jesper Juul: failure is an inevitable and necessary part of fulfilling play. In game or out, perfection is much too high a watermark for me. Rather than a laundry list of goals that assume success, I need a standard set of goals that assume failure.

The Beatitudes suggest an approach to life and to play that minimizes frustration and allows for delight in surprising places. They manage to make failure seem noble and wise-like I was meant to fail all along, so that I might accomplish some good in the world. It allows for kindness that isn’t so much patronizing as it is empathetic. And the rewards-they’re a heck of a lot more than bragging rights.

Red Dead Redemption provides plenty of achievements for the task-oriented. Kill 500 enemies with a mounted weapon. Capture a bounty alive. Win over 200 chips in a hand of poker. Accomplish those tasks, and you’ll have something to show for it: somewhere around 100 gamerscore.

But Red Dead Redemption also provides opportunity for the player to take the meek, mournful, peacemaking approach. You could watch the sunset. Carry out justice. Help out the townsfolk. Spend time hunting with your son. Protect your family. The blessings that come from these experiences aren’t as quantifiable as 100 gamerscore. They are blessings in the truest sense – the kind of thing we hesitate to call “fun” because fun is not a strong enough word. They are satisfying, impactful, profound moments.

But there’s always the temptation to chase worldly riches, medals and trophies. There are words of warning for the attitude that perfection was in my grasp. A counterpart to the Beatitudes, the Four Woes spell out the dangers that lie in wait for those obsessed with victory:

Those four woes acknowledge the satisfaction of the successful. They paint a picture of someone who is truly experiencing their best life now. But those blessings-that kind of fun – doesn’t last. Woe to those who have found every collectible and acquired every medal-they have found a dead end road. Woe to me if I stake my future on winning every multiplayer match or getting through Mass Effect with every crew member alive and intact. These achievements end with the sequel, the next generation of consoles, or a stolen hard drive.

It’s a call to play with grace – an undeserved favor – allowing ourselves to accept it after a failure and offer it to others.

For those who play games, the Beatitudes are a call to play to lose, even while trying to win. It’s a call to play with grace – an undeserved favor – allowing ourselves to accept it after a failure and offer it to others. It’s what causes us to help our teammates escape the zombie apocalypse in Left 4 Dead at our own expense. It’s what causes us to patiently lead and aid our teammates in Battlefield. It allows us to make crucial decisions in Mass Effect without extra save files, being willing to accept our inevitable failure state.

When every game we play is embedded with tasks to complete and goals to meet, it would serve us well to consider where the real value lies in our games: the rat race of achievements, or the play we pass on the way to the finish line.  The Beatitudes are the sort of personal achievements that offer a way away from the task-garden of our daily lives, off the well-worn path and into the heavenly playground, if for just a few moments.

Image/ “Sermon on the Mount” by Cosimo Rosselli.