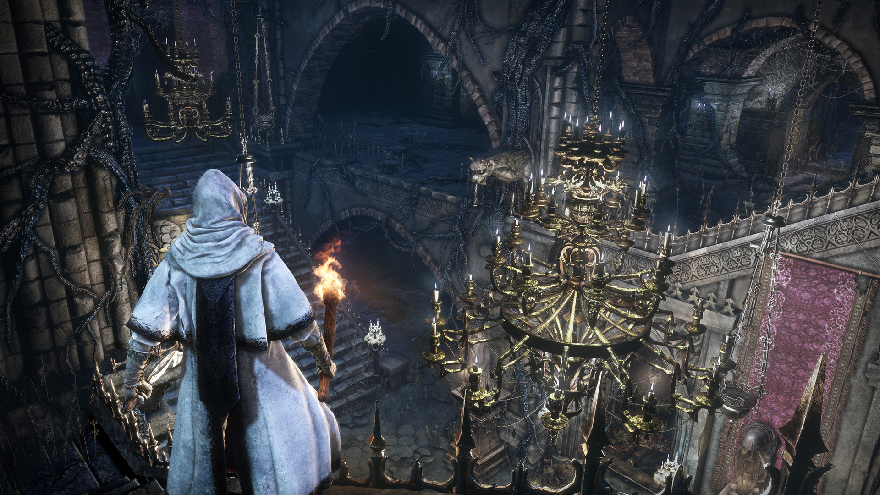 Spoilers for Bloodborne ahead.

What sort of horror is Bloodborne? It’s cosmic horror, sure, with chthuloid Great Ones reaching out from dreams to touch reality. They’re in the city of Yharnam’s tainted blood and twisted statues, and even in the way that trees grow, as a tangle of sick white stalks reaching toward the moon like the hands of the flash-frozen corpses in the Unseen Village. But Lovecraft isn’t the only source of the game’s atmosphere.

Bloodborne is as good at pure gross-out horror as cosmicism. Its reptile scales have a sheen that wouldn’t be possible on older systems, and every player recoils the first time they spot the forest snakes writhing toward them in hissing piles. Your skin crawls when you see the first snake-stack and realize that it comes up to your waist; then you find one that’s taller than your head. And later of course you meet the spiders with pale men’s faces and the singing brains with all the little mouths. The game experiments with all kinds of biological repulsion, from the full-on body horror of its infected and pregnant bosses to a hilariously pointless Doctor Moreau digression of hybrid beasts with dog bodies and raven heads. There’s even a strain of charming Halloween schlock in the mix of horror styles: ghostly carriages with no drivers, and gatekeepers who turn out to be “Already Dead” after they open a door for you.

The game’s Chalice Dungeons are home to their own types of jump scares and nasty surprises. I don’t think their style has a name, but I’d call it Daggerfall horror or dungeon sickness—the sensation of wandering blindly into randomly-generated passages that go who knows how deep and hold god knows what. The game’s procedural malice creates rooms teeming with spider-summoning Chime Maidens, eerie invisible ladies, and greasy-haired undercranked enemies that come at you with the speed of the girl from The Ring. Engorged bloodsuckers appear in rooms you already cleared just to scare the shit out of you. The absence of human intelligence in Root chalice design winds up making them worse but more unnerving than Bloodborne’s above-ground environments. Is there a more primal fear in games than getting lost?

Getting down to depth 5 is an ordeal many players will go through in order to encounter Yharnam, Pthumerian Queen, a storyline figure who can’t be fought in the main game. Getting to her is tougher than the fight itself—you have to fight practically Miyazaki’s entire Rolodex of bosses and struggle through a cursed dungeon that halves your health. But there’s another reason to descend through the ruins: to get the game’s two most mysterious items, which players are still trying to puzzle out.

The first is the Yharnam Stone, which seems to be the only Key Item in the game with no known use. Yharnam (the person, not the city) drops it on death, and its description has led to a great deal of speculation on reddit and wikis, where comments inevitably circle back to the same debunked theories in one of the most cyclically frustrating discussions since the Pre-Taped Call-In Show. The stone is either bugged, meant for future DLC, exerting some very subtle effect, intentionally useless (like Miyazaki’s Dark Souls “prank” pendant), or subject to story triggers so obscure that nobody has hit them.

The other Chalice dungeon mystery item is ridiculous:

Where does one shop for a tastefully eldritch solitaire engagement ring? If you’ve unlocked Pthumeru Ithyll chalices, do a glyph search for “sz73v83s”, a dungeon generated by PSN user Petro-rabbit that has the ring in a chest off a side passage of a giant swamp on layer two. (It’s there for the moment, at least—users can delete their shared dungeons, so if this one disappears, check a list like r/bloodborne’s to find one with the ring.)

As far as anyone’s found, there’s only one character you can use this ring to propose to: Annalise, Queen of the Vilebloods, who hangs out past the illusory wall behind Martyr Logarius. If you encountered Annalise before this, you might remember her as the covenant leader who is collecting these charming items:

Regardless of the amount of blood-sperm you bring Annalise to help her conceive a murder-baby, she will politely reject your proposal:

And if you ask again:

(A Youtube user uploaded the full scene if you want to see it.) This is Bloodborne’s last, most devastating mode of horror: social mortification. I love that “honestly!” I think that’s the one time anyone in the game speaks in a normal way.