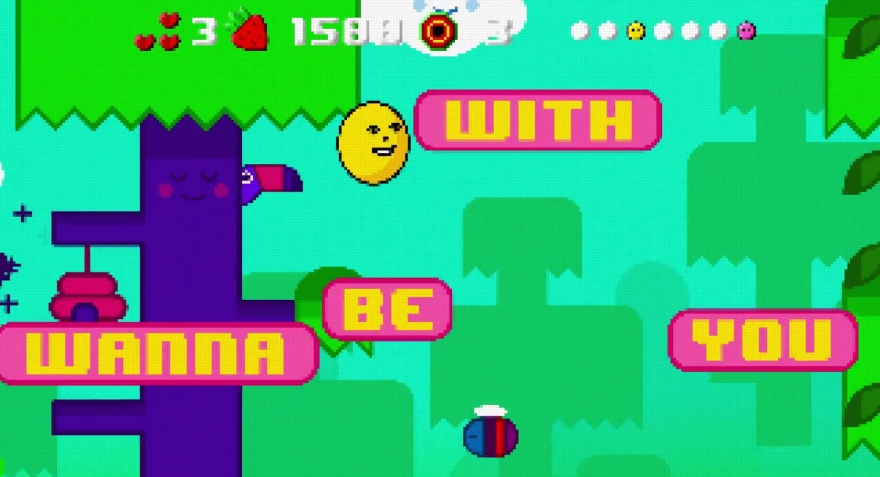 If you ever wanted to see Gorillaz and Blur frontman Damon Albarn dressed up as a giant ice cream cone, now’s your chance. Britpop group Blur have re-envisioned Super Mario World in their music video for “Ong Ong,” replacing Mario and Peach with Mr. and Ms. Okay, two smiling yellow circles.

The video follows the journey of Mr. Okay as he tries to rescue Ms. Okay, who has been taken from him by the evil forces of Mr. Cream, Mr. Brown, Mr. Red and Mr. Black—also known as Damon Albarn, Graham Coxon, Alex James and Dave Rowntree of Blur.

The music video has the same ideas behind it as their 1999 music video “Coffee & TV,” which featured two anthropomorphic milk cartons— Blur’s former mascots—as they search for a missing Graham Coxon (perhaps a prediction of Think Tank’s shaky recording process without the songwriter). While that video featured dulled colours and the tragic death of the female milk carton, “Ong Ong” inspires nothing but happiness, the clouds and hills all displaying smiley faces reminiscent of the happy flowers and clouds of Super Mario World 2: Yoshi’s Island and Super Mario World.

Bits and pieces of Hong Kong, where Blur spent five days recording their latest album The Magic Whip, are thrown in, with Ms. Okay kept in a pagoda castle. The side-scrolling format and lyrical platforms make Blur fans everywhere—okay, maybe just me—desperately wish for an actual game. (The unfinished Gorillaz 3D adventure game does not count.)

Not only does the video envision The Magic Whip’s most upbeat song in 8-bit NES glory, but, after the game has been “completed,” the real-life band “come back to life,” adorn their costumes and run around. The cute, happy settings of the music video are a sharp contrast to the more subdued, melancholy sounds of the album, but it’s good to see the band return to their former glory in videogame format after going more than 10 years without a Blur music video.

Watch the music video for “Ong Ong” above or click here.