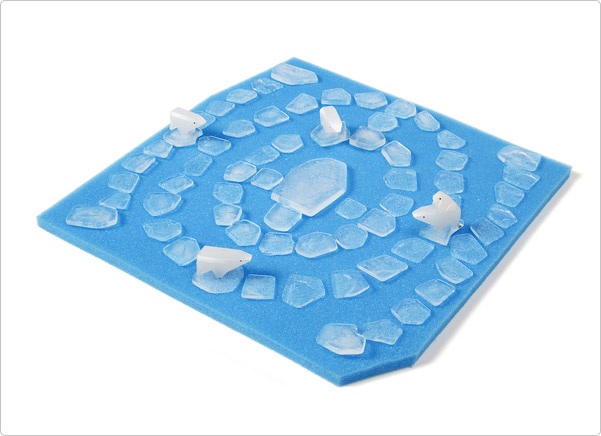 The world is warming up. This we know. Over its long, long life, the Earth has gone through multiple cycles of cooling and heating up again, or glacial advance and retreat. These are largely attributed to small shifts in the Earth’s orbit, which change the amount of solar energy received by the planet.

To find reasons for the current heating up of the globe, however, we must look to no one but ourselves. As we pump greenhouses gases into the atmosphere, wrapping ourselves in a giant, insulating, carbon dioxide blanket, the sea level rises and the ice sheets shrink; the global surface and ocean temperatures climb; intense weather events wreak havoc for people and animals alike all over the world.

the boardgame that melts

GEOlino, a German science magazine for children, wants to ensure that kids have access to resources that will help them to understand what the human race is facing (and what it’s causing)—in an easily digestible boardgame format. Recognizing the futility of trying to explain such a complex idea to a child using headache-inducing theory and history, GEOlino has made climate change child-friendly with MELTDOWN, the boardgame that melts.

Initially released a few years ago, in MELTDOWN, you guide a polar bear family to the safety of the mainland across ice floes melting in real time. The game provides its players (target ages 2-4, although I think a game or two would put the plight of the polar bear in perspective for me, as well) with a freezer compartment, effectively an ice tray; a set of four dice; and a polar bear family unit of three adults and one juvenile to lead across the ice in this race against time. The spongy blue game board, a miniaturized Arctic, absorbs the melting ice as you play.

More information about MELTDOWN can be found at the game’s website.