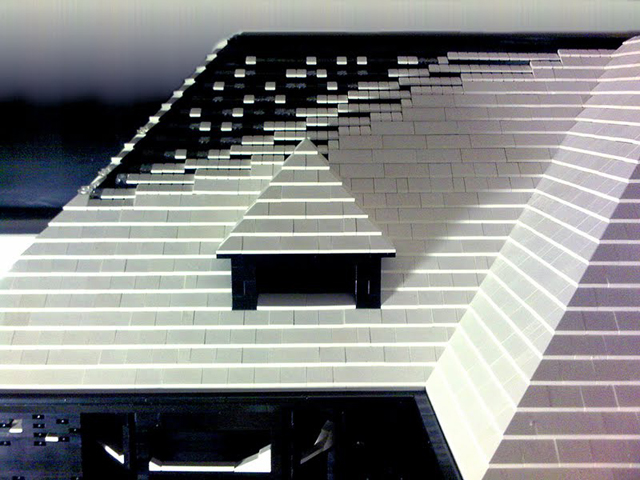 After five years dedicated to the beautification of the boardgame, Mike Doyle found a new calling—Lego sculpture.

It was this summer, on a trip to Legoland with his boys, that Doyle, a 43-year-old graphic designer from New Jersey, rekindled his passion for the building blocks. When he got home he searched the Internet to see what kind of art, if any, people were creating with Lego. He discovered sculptors, like Nathan Sawaya, who use the bricks to create art pieces much bigger than your average play set. “I had no idea that Lego could be manipulated to the degree that people were doing,” he says.

After some thought and research (Doyle wanted to be sure that the subjects of his sculptures hadn’t already been built) he began replicating the facades of abandoned buildings. “I’ve always loved the notion of decay, particularly around buildings and man-made objects.” His first work is rendered in black-and-white bricks—a dismal home, door off its hinges, half-buried in snow. It’s a stark and haunting piece quite unlike the colorful, ornate, and ordered boardgames he helped birth.

This new, plastic medium brings tactile satisfaction and inspiring limitations. “I find the experience has a game-like element to it,” Doyle says. “Lego building is sort of puzzle-y, with a rigid rule structure to it.” Lego bricks come in a finite number of shapes and sizes. Your vision is limited by the molds and plastics that Lego uses in its factory. You can’t mix blocks like paint. And you can’t squeeze or mold them to your whim.

And then there’s the immediacy of snapping two pieces together, stepping back and being able to see a completed project. Boardgames weren’t gratifying in the same way. “Often, I would not see the final product until after many in the gaming community would have a chance to experience it,” he says. This could be especially tough when the boxed game wasn’t what he had envisioned.

The special edition of Caylus, published by Ystari in 2007, was a particular disappointment for the exacting artist. It was several months after the game was printed when Doyle got his hands on the box. When he finally saw the fruits of his efforts laid out on a table, he was crestfallen. “My heart just sank,” he says. Despite meticulous care, Doyle found that the printers had reproduced the art much darker than he had intended. “The pieces did not properly pop off the board,” Doyle explains. “The board became harder to read.”

Boardgames and videogames share a unique dilemma. The underlying mechanisms have an uneasy relationship with the visual and narrative layers that help connect them to the human imagination. A game that is pure mechanic can feel too abstract for the casual player, no matter how perfectly realized. The ancient game of Go, for example, may be one of the best boardgames ever devised, but its mechanical complexity and bare theme make it tricky for the layman to approach. Meanwhile, a game that relies too much on aesthetics, setting, and plot can feel simplistic or gimmicky—a shallow diversion dressed up to be more than it is.

While the trend in videogames seems to favor graphics over mechanics—many gamers bemoan the lack of complexity, depth, and challenge in modern games—the opposite has come to pass in the contemporary boardgame. Mechanics frequently come first, leaving the art and theme as an afterthought.

Poor boardgame art doesn’t just make a game ugly, Doyle says; it can interfere with the player’s ability to quickly and easily grok the state of the game. The bits and board are the interface between player and mechanics. But too often designers, with their focus on structure, have allowed art to go by the wayside. Reiner Knizia’s well-respected Tigris & Euphrates is a good example. The game is a fairly abstract one—players place tiles of varying color, lobbying to gain control over the board and ultimately score a balanced number of victory points. The connection between theme (the ancient Fertile Crescent) and mechanic is tenuous. Doyle points out that in execution the game’s art, while keeping with the theme of the game, does more to obfuscate than clearly aid the player in making important gameplay decisions.

Mike Doyle’s boardgame work was a thoughtful push back at abstraction, and a concerted effort to make art and iconography do the dual work of beautifying and informing. Doyle wanted do no less than elevate the medium above its reputation of lowbrow living-room distraction—Monopoly, Checkers, Scrabble—to something more artful.

His crusade to raise the bar on boardgame art began in 2005. The first post on his blog, Art Play, expressed a yearning to bring his skill as a graphic designer to bear on the medium he’d come to love. “I hope to write here about thoughts concerning the production of games, their artwork and the overall look of games,” he wrote. Doyle shared his lovely and ornate fan reworking of Puerto Rico and hinted at a gig that would actually see publication—an artistic overhaul of Reiner Knizia’s notoriously ugly auction game Modern Art.

Eventually Doyle’s passion found purchase. He reeled in paid gigs producing games that found their way onto the tabletops of gaming enthusiasts. For Cavum, a game about precious-gem mining, he created a sepia-toned board with a typeface that looks straight out of a 19th-century almanac. His reworking of the 1980 fantasy classic Titan transformed the original’s utilitarian play-space into a board that appears wrought from polished marble and metal studs. His limited edition of Caylus, embellished with replicas of medieval art and minted coins, is now out of print and highly collectible.

Unfortunately, boardgame jobs were never very lucrative for Doyle. He continues to pay the bills as a graphic designer for a brand agency in Manhattan. His tabletop endeavors were done, primarily, for the love of the medium.

Doyle estimates that the typical job took between 200 and 300 hours. When fully immersed in boardgame design, the family man squeezed his sideline between his paid job and home life. He carved these hours out of his train commute to Manhattan—sketching and executing boardgame art and layouts on a laptop. On weekends he’d steal the rare hour or two he wasn’t spending with his kids. And once they were abed he’d continue. “After a few years, that was enough,” Doyle says.

He didn’t take his assignments lightly. Doyle started by mapping out the pieces to determine how they fit on the board. He determined how many of each piece could feasibly wind up on the board at once, then puzzled out the most logical way to arrange the different parts of the board. Primary in his mind were the needs of the player—which elements on the board were the most important for them to see. Once he understood the hierarchy of information, he began sketching potential layouts for each board. Only then did he start pulling in the thematic art—the flavor that would help beautify the board, and draw a sensible line between the nuts and bolts of play with the narrative occurring in the player’s imagination.

His attention to detail meant a lot of back-and-forth with a game’s publisher. To Doyle, the job was more than producing a commissioned illustration that would be slapped onto the outside of the box. He approached the boardgame holistically, with an exhausting, time-consuming thoroughness. For many, the craft of designing and publishing boardgames isn’t a full-time job. Despite big hits like Monopoly and Settlers of Catan, the boardgame field is more of what Doyle calls a “cottage industry”—a small group of people making highly specialized products for a slightly larger group. In that sense, boardgames are much like indie rock, ‘zines, or alternative comics. Most people create for the love. Some manage to make a living.