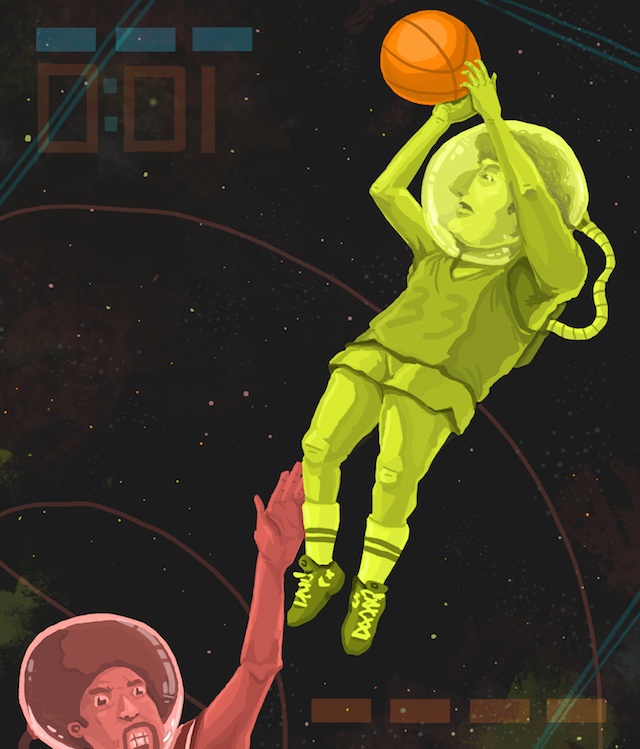 The Macintosh chirped away while two malformed pixel-drawn shapes played what appeared to be basketball.

My mom told me the beeping was a ragtime song by a dead guy named Joplin. She replied that no, he was not likely related to Janis; and then lifted the fallboard to play a version of the same tune for me on the piano in our living room. An experienced concert pianist, she would jump at the opportunity to share music with me, and hearing the abrasive chirping from the tiny computer speakers down the hall, simply couldn’t resist. I smiled and nodded, while eagerly waiting to get back to business; a business that, at the moment, happened to be a very workmanlike schooling of Dr. J. on the blacktop.

At least I think it was blacktop. Black was the background color of the screen, and subsequently the court. Technology being what it was in the mid-’80s, Dr. J and Larry Bird Go One on One was something kind of resembling a game of pickup basketball. My imagination being what it was, I assumed that whenever Larry Bird and Julius Erving got together to horse around, they did so on a hoop just like mine, in a driveway just like ours, next to a house just like ours in a Massachusetts suburb just like ours. So, naturally, a quick match-up between the two NBA superstars would necessarily be on blacktop.

I always played as Larry, for the obvious reason that I grew up in Massachusetts and we were all obsessed. He was our “Great White Hope,” though how anyone knew what color hope was confused me as a child. Being about five or six, I don’t think I even knew who Dr. J was, except that I knew he could dunk, which to this day I’m not sure Larry Bird could ever do. I guess I was programmed by Boston sports fandom—but the jump shot was so much more exciting to me than the dunk, and thus Bird so much more so than Erving.

So there I was, nose inches away from the small square screen, raining down three-pointers on a hapless digital Dr. J, and watching that pixilated foul-mouthed little janitor sweep up the broken glass after a backboard-shattering dunk, which to this day remains one of my favorite little Easter eggs in a sports videogame. That was 25 years ago.

While modern sports simulations do so much so well, have they lost a certain appeal?

Today Dr. J and Larry Bird are back, as unlockable characters, and the latter as one of the cover athletes for NBA 2K12. As hype built up for the game’s deep catalogue of historic NBA players, I couldn’t help but think back with some nostalgic glee to One on One. I couldn’t wait to replay the match-up of my childhood, presumably with even greater fidelity and sophistication than before.

And NBA 2K12 is a dramatically different basketball game than One on One. The sophistication of the controls, the diversity of player actions, and the photorealism of the game’s graphics create an engrossing, challenging, and impressively accurate basketball simulation, for sure. The breadth of basketball strategy and technique that can be engaged through the game is staggering. And the televisual aesthetic has been honed such that the camera motion and cutaways bear a striking resemblance to a televised NBA game.

I do wonder, however, what may have gotten lost in the transition from a highly abstracted version of basketball like One on One to a more representational, simulative game like NBA 2K12. Undoubtedly Eric Hammond, the creator of One on One, was not thinking about degrees of abstraction while creating the game—no, he was likely just working within the constraints and boundaries of the platform and technologies he had available; the game was first released on the Apple II. Indeed, as a child I did not measure One on One for its stylized representation of basketball as much as I considered it the closest I could get on a computer until Double Dribble. There is the obvious danger of reading our current condition onto the projects of the past, as though the design of old games were all simply leading up to today—an illusion of progress. However, One on One, when compared to the representational NBA simulations of the current generation of software, can be seen as a piece of surrealist art. While modern sports simulations do so much so well, have they lost a certain appeal?

Sports videogame publishers are still attempting to offer players highly representational games that mirror their experiences watching sports on television. If it’s in the game, it’s in the game, after all. But some independent game developers are playing with the genre, and games like Nidhogg, Hokra, and PoleRiders are pushing on the boundaries of what constitutes a digital “sport.” We can likewise look at One on One as something unique and different, as absurdist basketball, as a work of abstraction.

One on One suffers a strange surreal slowness of play. Bird and Erving float through the air on jumpers and dunks, and on shots the ball lazily creeps toward the basket. The game operates as though the world were submerged, or as though it were filmed by the same people who faked the Apollo moon landing. The offensive player dribbling the ball can perform a spin move that, given the wide-armed character pose and the fluidity of the game, resembles a pirouette—a basketball ballet.

The hushed, aquatic world of One on One contorts and refracts our traditional perspective of basketball.

The world of One on One is quiet. The sound in the game is sparse. The odd crunch of the ball colliding with the floor and rim, and the static of the invisible cheering crowd, reinforces the absurdity of the space rather than empowers the simulation. The odd jangle of the opening music, Joplin’s “Maple Leaf Rag,” informs us that the two basketball stars inexplicably travelled through time and are playing against the backdrop of a 1920s speakeasy.

The game itself looks like a kind of Egyptian hieroglyph basketball. The flat court on which Larry and Julius float merely suggests depth, neglecting traditional approaches to perspective. Characters do not change in size as they move from foreground to background, and there are no angles to suggest depth of field. The hushed, aquatic world of One on One contorts and refracts our traditional perspective of basketball.

What of our protagonists, Larry and the Doctor (Ph.D., not M.D.)? They appear as blotchy oppositional twins, the one a photonegative print of the other as though their ethnicity and skin color were a mere flip of a chromatic bit. But if you look carefully, pixel Bird, like his forefather, sports a mustache. Larry is wearing his No. 33, Erving his No. 6. Both are wearing blocky kneepads. Their movements are identical but asynchronous, modern dancers on an ice-black stage. There is no discernible difference in ability.

One on One is basketball as much as it is not. While games like NBA 2K12 and EA’s presumably dead NBA Live series are pushing forward in one direction—attempting to digitally recreate the experiences of professional basketball players (or perhaps some kind of hybrid player-coach-manager)—a game like One on One takes the rules of basketball and creates something new. One on One, seen through the lens of a world with modern sports simulation, is a bizarre, abstract vision of a strange basketball world. Regardless of the designer’s intentions, the game is an artful adaptation of a known domain, at once a referential and an altogether surreal take on a familiar pastime. It is an example of the potential of digital games to explore new territories that transcend sports simulation, flirting with the imagined, the fanciful, and the absurd.

Boomshakalaka! explores the intersection of sports culture and videogame culture. Abe Stein is a researcher at the Singapore-MIT GAMBIT Game Lab and a graduate student in Comparative Media Studies at MIT. He studies sports videogames and their players, and blogs at A Simpler Creature.