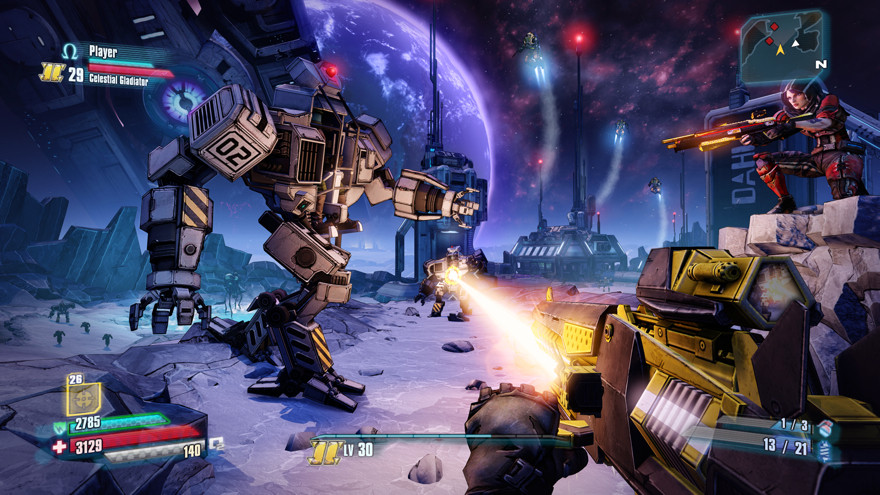 Borderlands: The Pre-Sequel is the videogame equivalent of Italo Calvino’s If on a Winter’s Night a Traveler.

It’s the sort of work that leaves poststructuralists drooling: self-aware, unstable, self-contradictory, but also impossible to read without its contradictions. If the book is about you and about You reading the book, does the book itself exist? Which book? And, if neither book exists, what is If on a Winter’s Night a Traveler?

In the same way that Calvino tricks you into reading a book about reading the book you’re reading, Borderlands: The Pre-Sequel begs a lot of questions about what it means for you to loot’n’shoot for no reason other than to loot’n’shoot some more. In case you haven’t played a Borderlands game before, here’s how it goes: get a mission, run to a distant point, shoot everything, pick up a bunch of loot, find one or two good items to equip, sell everything else. Rinse, repeat.

Normally in loot-focused games this core loop casts itself in an earnest fantasy mode, as in Diablo or Gauntlet. But, as millennials know all too well, earnestness is irony’s wheelhouse, and The Pre-Sequel is supersaturated with ironies: literal, structural, mechanical, etc.

Throughout the series, Borderlands has always taken itself somewhere between not seriously and nonsensically. Meeting Face McShooty in the last game was a prime example. He was a meta-mission, a character who lived and died exclusively to tell you to kill him.

Unlike past installments, which drew most of their humor from characters like Face McShooty, Brick (a human ham-hock), and Claptrap (a nihilistic robot who can’t help but sound overjoyed), the running joke in The Pre-Sequel seems to be the genre’s underlying conventions themselves. I figured that Tiny Tina’s Assault on Dragon Keep—a piece of downloadable content from the last game that sat the characters from Borderlands around a table to play Dungeons & Dragons—was the most meta the series could get. A game within a game within a game is pretty deep inception. I’m happy to report that The Pre-Sequel proved me wrong.

I laughed, but it felt weird.

For example, the first boss fight opens with the usual bombastic “I’m gonna end you!”-type threat, unmotivated by much other than the fact that this is a game about killing stuff and, well, bosses have to try to kill you to make it interesting. What’s unusual is that, in introducing the boss, the game literally points a giant arrow at him that says “Kill this guy.” I laughed, but it felt weird. It’s not as if we need to be convinced or reminded. It’s not as if there are even other options. “Kill this guy” is pretty much the takeaway message from every interaction you have in Borderlands. Literalizing it in this way undercuts the whole game. Verbalizing the assumption on which these games rest—killing people for their stuff helps you—makes it uncomfortable to press start.

While playing, you get the sense that there’s an intense disillusionment with the Borderlands formula rumbling under this game. After all, the form only lends itself to one type of story—”Kill this guy”—so the best thing to do is to take that constraint to an absurd set of conclusions. Having pressed toward absurdism in the previous games—with Mr. Torgue perhaps being the Kurtz to Pandora’s heart of darkness—the only thing left to do is to strip away the artifice and expose the system underneath for what it is. It’s funny, aggressively self-deprecating, and fun to play. But, just like in If on a Winter’s Night a Traveler, verbalizing our assumptions quickly trends away from humor and toward uncomfortable self reflection.

Yes, Borderlands: The Pre-Sequel tells us the story about Handsome Jack’s background and how he got to be “the villain we loved to hate” in Borderlands 2. It has a few bazillion more guns. If you liked the previous Borderlands, you’ll love it.

But its greatest strength is that The Pre-Sequel quietly asks you to think critically about the loot’n’shoot formula in a way that destabilizes its own value. You’re playing a game about playing games, and it constantly mocks the assumptions you’re bringing to it. It implodes on itself to watch your reaction. In short, The Pre-Sequel can be really uncomfortable if you’re just there to “have fun.”

Before you start, you have to make a tacit agreement with Borderlands: The Pre-Sequel: This is one of those times where you’ll gaze into the abyss, and the abyss will gaze into you.