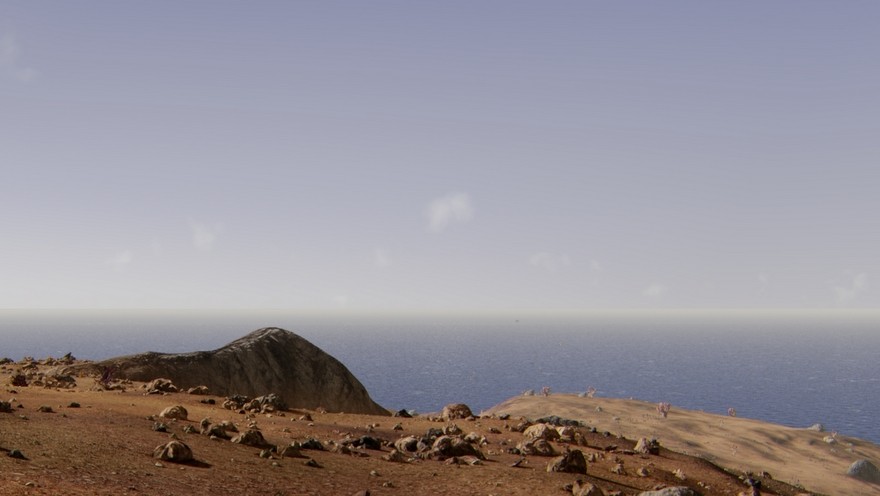 The silence of outer space is deafening. This is literally true in 2001: A Space Odyssey, where silence in a crowded theater comes off louder than a bomb. But it’s also true in a metaphoric sense: the silence from space—the fact that we’ve found ourselves more or less alone in the universe so far—deafens in a different way. It’s the rallying cry of conspiracy theories and History Channel specials: “We can’t be the only ones out here.” We’ve spent a long time waiting for the silence to end, but it hasn’t.

Extrasolar enforces that silence. In videogames—as in movies—we expect more signal than noise. We expect changing variables, shifting power structures, conflicts, resolutions. Inputs. And constantly. Extrasolar gives you just a little bit. A blurry figure half out of frame, a reason to doubt. It’s always enough to get you to tilt your head—and then it makes you wait. An hour, maybe two. Eventually, twenty-four. This is an exciting, trying, then tiring process.

The gist: when you sign up for the game, you’re also applying for browser-based control of a planetary rover not unlike our pal Curiosity. In the name of Science-with-a-capital-S, you will drive this rover over the surface of unexplored, fictional Epsilon Prime, take pictures of the planet’s surface, and then tag areas of interest (flora, fauna, dirt clumps) on those photos (Aside: tagging like this feels far too much like some Big Data/Big Brother job too many people will hold in the not-too-distant future).

The tropes of sci-fi suspense trot out to see how you’ve been since Close Encounters of the Third Kind.

Thanks to a hacktivist who has a bone to pick with the eXoplanetary Research Institute (XRI, the group who made the rovers and runs the program), you get “selected” as one of the lucky few who will get control of a rover. From there, the game turns down its twisty little passages as rules break down, first impressions draw themselves into question, and the tropes of sci-fi suspense trot out to see how you’ve been since Close Encounters of the Third Kind.

What makes Extrasolar interesting is the particular way it involves itself in your life. Often we say that games consume us. Usually, we’re “addicted.” Part of the reason that we can’t (or won’t) stop ourselves from playing is that the game gives us no compelling reason not to. More levels, more lives, more waypoints. Mostly, more signal and no silence. Extrasolar, on the other hand, gives you no option other than to wait. It gives you too little information to go on, and what little you do get has been filtered through a shadowy organization you’re given good reason to be leery of. As ever, nothing is as it seems.

After you pick where your rover goes next, you have to wait at least an hour for it to get there, during which time I imagine you’re supposed to go catch up on the news or accidentally watch a bunch of YouTube videos. One explanation for that delay is the ARG-y blurring of fact and fiction: you must wait an hour because that’s just how long it takes the rover to roll over all the hills that are in the way, set up shop, and send you a picture from a remote planet. OK. Fine. Boring, but fine.

A more interesting way of reading this takes the waiting as part of the game. In a sense, Extrasolar’s core action is waiting to wait. You play the game in your email inbox, web browser, and the spaces between. At first, I was suffering a bit of cognitive dissonance, dealing with real work emails, sending links to articles, archiving GameStop coupons, and then occasionally getting an urgent request from XRI to get back out there and tag some photos. You do whatever’s on your task list, go about your day, and eventually Extrasolar becomes another to-do online, a more consequential social media refresh. But it also sets questions humming at the back of your mind, especially the one that Extrasolar is so good at asking: What else is out there?

Of course, it’s always scarier when you don’t know. No one really wanted to see the Cloverfield monster. People who study aliens (xenoarchaeologists, in case you were wondering) might be out of a job if their objects of study ever really turned up. The silence is what’s deafening, and Extrasolar is at its best when it makes us listen to it.