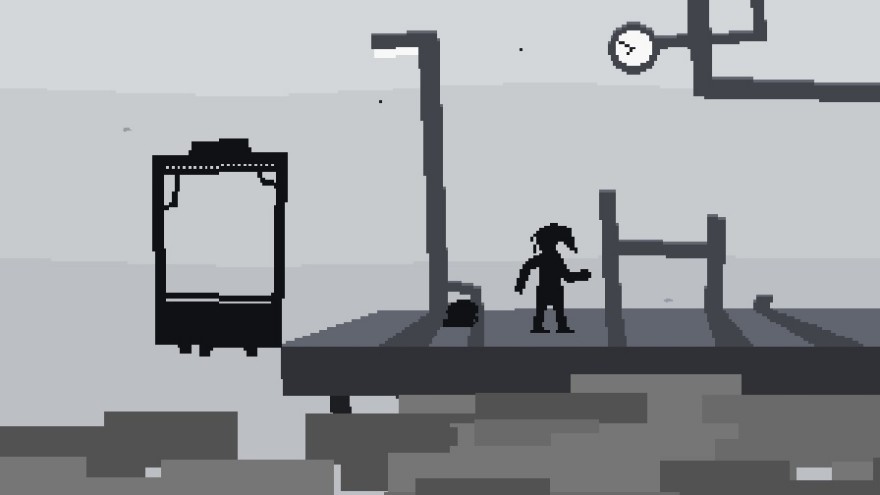 Tom van den Boogaart doesn’t so much create videogames as he does self-contained, crooked worlds that have a tangible desolation throbbing at their core.

Central to nearly all of his games is a conflict between character and place: A brown bear in a tiny apartment, a hapless chicken watching TV, a housefly doing chores in a grim city, a duckfish standing still in a dance club. These are human resides and societies, the surroundings we built for ourselves and are often raised in, so we’re somewhat comfortable with them (to a degree).

But Boogaart’s characters are not humans. They’re animals and abominations that, unlike us, wear their discomfort in their physical form. Some of them may have recognizably human behaviours, some may wear clothes, but this pretense can’t last forever. Each of these characters feel the chafing of their anthropomorphism, and each has their breaking point. But not all of Boogaart’s games detail this snap of the primal urge—some precede it, focusing on misery and suffering, rather than rage and release. Bornard is not one of those.

But all this comes at a cost.

Bornard is Boogaart’s latest creation and his entry into Ludum Dare 29. It’s a short sidescrolling action adventure involving a silhouetted animal-being moving through an industrial dystopia. It starts off slow and quiet, but by the end it is undoubtedly a “rage and release” game.

It begins above the fast-moving gray noise-clouds of metallic dust that, presumably, is the result of erecting a gentrified steel sky-city. Above this thick layer of pollution the sky is bright and electronic displays signpost luxury products like coffee and stimulants. Transportation across the smog—between sky platforms—arrives moments after the press of a button. The functionality and convenience of machines is fetishized with a close-up view in which a pointing finger must be plunged onto a large button.

But all this comes at a cost. Below the smog lies decaying walls, seemingly ripped apart by the ravages of war, and limp inhabitants who suffer for the benefit of those that reside above.

Taking the elevator down into the dark underbelly is a turning point. You acquire a gun that is neatly placed within the elevator for you to pick up, suggesting that you organized for it to be there. The act of picking up the gun is done in close-up, as with the pressing of buttons. It signifies its role as catalyst for your intent when arriving at your destination.

So, when you blast the armed oppressors running at you amid the polluted surface sector of this city, it’s not done for pleasure—the silhouette means you can’t even see facial details, though expressions—it’s what’s necessary to enact change. As we all know, legacy lasts longer than the person. So after your murders, you down a bottle of stiff alcohol, and take a lift up to your doom.

Bornard is far from being as clear-cut as that. That is certainly how I have interpreted its series of events, but there’s wiggle room. It is, however, typical of Boogaart’s work. As such, there’s no doubt that its themes concern forcing a character (specifically an animal) to fit into an unsuitable place or society, and the consequences of doing so.

You can download Bornard for free over on Game Jolt. Its Ludum Dare entry page is here.