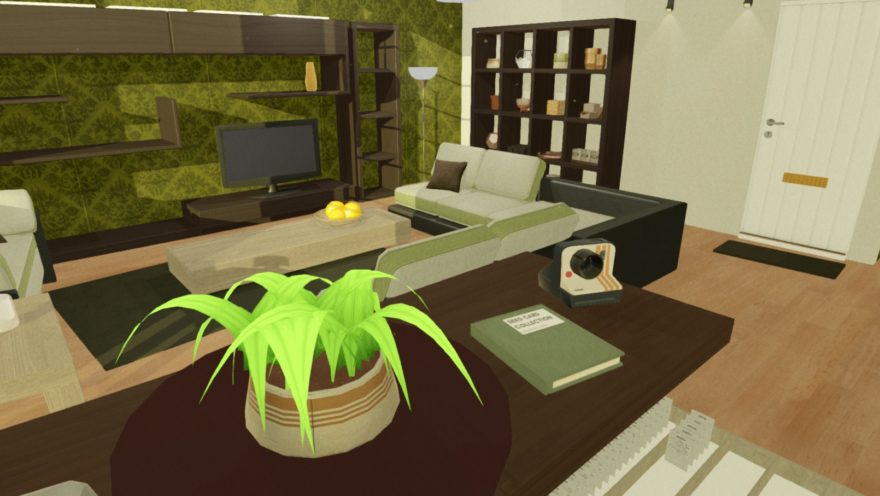 One night, James Biddulph couldn’t sleep, so he got up and made a quick garden generator on his computer. It worked by having you type in a word from which an abstract-looking plant would grow. He did this as the idea of having a garden has been his motivation in recent months. Biddulph is anticipating a move from a flat in the city to a house surrounded by a little more greenery with his fiancee. He can’t wait.

“Most of us spend a lot of time in cities, offices, busy, urban environments, pretty stressed out most of the time too,” Biddulph said. “Being in nature feels kind of the opposite to that, it’s calm, quiet, and a good place to switch off for a while and get some time to think.”

Perhaps hoping that his tiny garden generator might help his friends in a similar way as it did him, Biddulph shared it with them. To his delight, many of them connected with it straight away. “Everyone did the exact same thing the first time that they played. They typed in their name, their friends, families, and pets names,” Biddulph told me. “Everyone also reacted in a similar way, seeing links between the plants and the names. Someone might think a plant is very chaotic, just like their friend.” That was all he needed to convince him to work on it for longer. Now he calls it this little project The Botanist.

What struck Biddulph about his prototype and the reactions it got was how it got around one of the main problems of procedural generation: “you have near infinite stuff, [but] none of it has any meaning.” With that in mind, he wanted to develop his prototype into something that would help people connect with each other on a greater level. That’s where seed sharing comes in. The words you type in are used for the random number generator and affect a plant’s height, color, branch width, and other subtle variables. What this also means is that every player can type in the same word and get practically the same plant template as a result. “This is important, as it lets us share seeds,” Biddulph said. “If I find a seed that I like, I can let you know about it, and you can grow the same seed in your game.”

However, the plants can grow into different shapes—number of branches, where branches bend, number of flowers, the length of flower stems, etc. Having got my own bonsai tree this year, I’m surprised at how Biddulph’s plant generator parallels the ancient art, in which people channel meaning into their miniature trees through the pot shape and color, the root flare, the texture of the trunk, the bends in the branches, and much more. One of the most famous bonsai trees is Goshin, which is a small forest of bonsai trees, with each tree representing a spirit that would protect the artist’s grandchildren. In The Botanist, this act of dedicating a plant to a person in someone’s life can be made even more explicit given that you can use a name to create the plant in the first place.

Biddulph has since expanded The Botanist beyond its initial conceit, which involves generating plants and admiring them. The game starts with you losing your job, which is when you decide to become a botanist, trying to sustain yourself while doing something you love. Biddulph found himself in a similar situation a few years ago when he tried to make a living as a pixel artist and drew from it. “What I found was that the most important thing that I needed was a good reputation, with that you can make a living for yourself, so this is what I focused on in the game,” Biddulph said.

“I really want the game to be a positive experience”

What you do is work for clients who will ask for plants of certain types, colors, and variations. If you manage to fulfill the request you can take photos of the plants and send them over to the client. If they’re pleased with your work then your reputation will increase, which in turn unlocks different perks that’ll help your green fingers along. While making this part of The Botanist, Biddulph has made sure not to make it too stressful—that’s the opposite of what he’s after. “I really want the game to be a positive experience for players,” he said. “I don’t think that if the game had a strong resource management element in it or something and a player lost because they couldn’t pay this month’s rent it would give them anything positive, even though it is more realistic.”

That’s why you don’t have to keep track of money or pay for seeds in The Botanist. The only limitation is that you have to try to reach a certain reputation in a set time otherwise you’ll be forced to get another job, ending the game. The point of is to give some sense of progression to the game and encourage you to learn about and experiment with the plants. While the game only gives you five seeds at a time it does let you write about each one so you can keep track of the ones you like.

“If some players play this game and feel just a little bit happier, a bit less stressed, planting seeds that have names with happy memories, then I would feel like I’ve achieved what I wanted to,” Biddulph said. “If some players take away a bit of hope that they can get themselves out of a bad situation, maybe they can start that company, move to that new job, then that would be an incredible thing to do.”

You can find out more about The Botanist on its website. It should be coming to PC in early 2017.