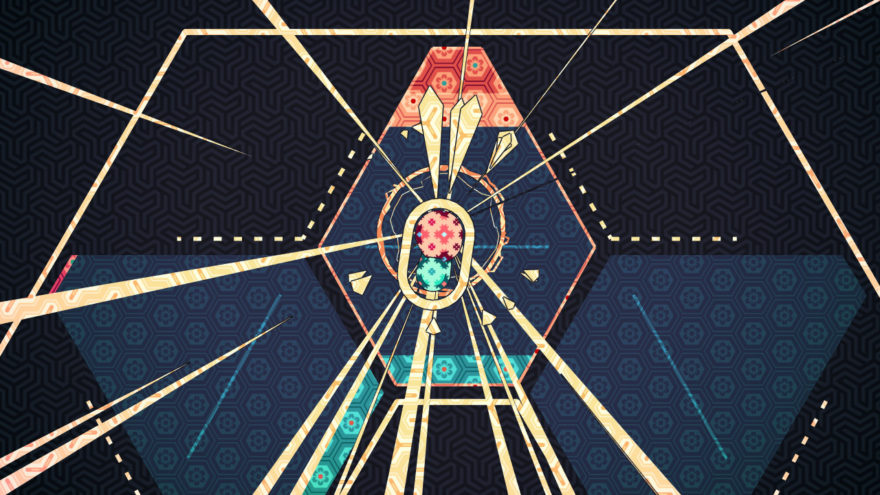 Ian Snyder is responsible for making one of my favorite games of 2014: The Floor is Jelly, a side-scrolling platformer that makes jumping more playful than ever. So many game makers try to reinvent the platformer by tweaking the jump—the distance, the speed, or the friction perhaps. But Snyder went another way and changed the world around the jump. It worked wonderfully.

For his next game, Snyder has taken this same unique, if simple, approach to exploring a new avenue in an established genre, and applied it to competitive multiplayer games. Called BOTOLO, it’s due out for Windows and Mac on December 15th. It doesn’t look like many other competitive games, nor does it think anything of playing fast and loose with the foundations of the type. As Snyder describes it, BOTOLO is “a fast paced mindreading competition,” and a “dance inside the negative space between your opponent’s thoughts.”

“Everything that happens in BOTOLO is a sum”

Snyder started out with an interest in the experience of playing competitive games at a high level. But he also wanted to see how much you could strip from competitive games before they became uninteresting or dull. “I wanted to throw fighting games in a pot and turn up the heat until all the water and everything that wasn’t Fighting Game boiled away,” Snyder told me. Alongside this, he was looking to forego the necessity for skill in a competitive game—in his words, “the game should not be difficult to play.” The results didn’t quite connect with people in the way he was hoping for at first, so he spent the next two years honing the game until his small experiment turned into BOTOLO.


At its most basic level, BOTOLO is a game in which both players are after a ball, which they need to bring it to designated zones and hold it there to win that zone, while always trying to prevent their opponent from snatching the ball from them. But the heart of BOTOLO is prediction. “Any given event in BOTOLO is the combinatorial result of both players making predictions about the other player, independent of one another,” he said. “Everything that happens in BOTOLO is a sum, and each player is only half of the full equation. This means that, although they are thinking and scheming alone, it should be (mostly) impossible for either player to act alone. There should be no way they can ‘opt out’ of the equation, no null action they can take.”

Snyder has clearly thought a lot about “null action” and its role in videogames so that he can subvert it. He describes the “feel” of a game as being defined by the rhythm of acting and resting, i.e. when you’re performing an action and when you’re not. Null action is this resting period and it’s there to let you catch your breath. Snyder wanted to make a game that reduces null action to nil, but that’s very hard. “The only way around, as far as I can tell, is to make the null action something done only with intention and planning, rather than done passively,” he told me.

a form of dance based on tension and timings

This is why Snyder posits the “central decision loop” of BOTOLO is a choice of acting and waiting. It’s a game about waiting for the right moment to strike, to steal the ball from your opponent, or if you have possession, to block an attack. The steal and block maneuvers are the pivots for the rest of the game. Both moves require the player to hold the action button down to perform either a block or a steal. The defender wastes shield during a block, however, with the complete depletion of the shield rendering them entirely vulnerable for a couple of seconds. But a well-timed and therefore successful block scores the defender points.

As the risk is high for both players to commit to these actions what you tend to see is both of them prodding or waiting until one of them opens themselves up. This is something that Snyder recognizes as a form of dance based on tension and timings. “Generally, the hardest thing for new player to learn about BOTOLO is that waiting is something you have to do intentionally, and once that realization occurs the rest of the game quickly clarifies itself,” Snyder said. “The whole thing is pinned upon these null actions. If you can intuit the natural rhythms at which your opponent stops to think, you’ll be miles ahead of them already.”

The other major way that Snyder subverts the tradition of competitive games is through BOTOLO‘s visuals. Each level is a top-down arena divided by sharp lines and contrasting zones of patterns. He told me he has difficulty connecting with the hyperbolic aesthetics of most fighting and competitive games in which characters can often be identified as “a floating orb of miscellaneous muscles.” He opted for a different look for BOTOLO as he’s “interested foremost in how to make a game look good given the constraints of its design as a whole.” This is why, rather than making a character-based game he thought of the visuals in terms of texture.

“I’d experimented previously with these screenspace patterns in Thirteen Gates, and it was a visual aesthetic to which I’d always wanted to return. Given the abstract nature of this game, this seemed a good opportunity. BOTOLO, mechanically, is about abstract thought and identifying patterns in your opponent’s play, so there’s a harmony in making the game’s visuals a patterned abstraction.”

The big issue that Snyder may face given that BOTOLO doesn’t have online multiplayer (only local multiplayer and a single player mode), as well as its unconventional ideas and looks, is that it may struggle to find a large audience. That said, it has already been used for a tournament at Fantastic Arcade 2015, and Snyder only has hopes that it will become a frequent shower among tiny competitive communities. It is an esport after all. “These smaller communities may be more fractured than international franchises; their players, instead of winning thousands of dollars, might win the $20 everybody here pitched in, or the right not to do the dishes for a week, or even just the pride of knowing they’re better at BOTOLO than their friend, but whenever and wherever two people play BOTOLO, BOTOLO is alive.”

You can find out more about BOTOLO on its website. It also has a Steam page and will be available on December 15th.