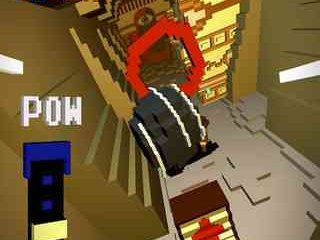 TwinSky Games’ Indiana Jones: The Brave and the Boulder is a devilish twist on infinite runners such as Temple Run.

Ostensibly, the game is a pastiche of the well-worn genre that we never wanted to see again but when you start to unpack it, the whole thing gets weirder and weirder. This game, like many others, apes the oft-parodied boulder scene from Raiders of the Lost Ark. However, in Indiana Stone, you are the boulder, instead of the bouldee. The player controls the rock in its quest to squash anything wearing a tan leather jacket. It is a take down of infinite runners that has you literally taking down infinite runners. At the same time, the game itself IS an infinite runner. Absurd.

The Brave and the Boulder is a bizarro self-loathing darling. Besides, any videogame with not one, but two, borderline copyright infringing puns shoehorned into its title has earned a spot on my hard drive.