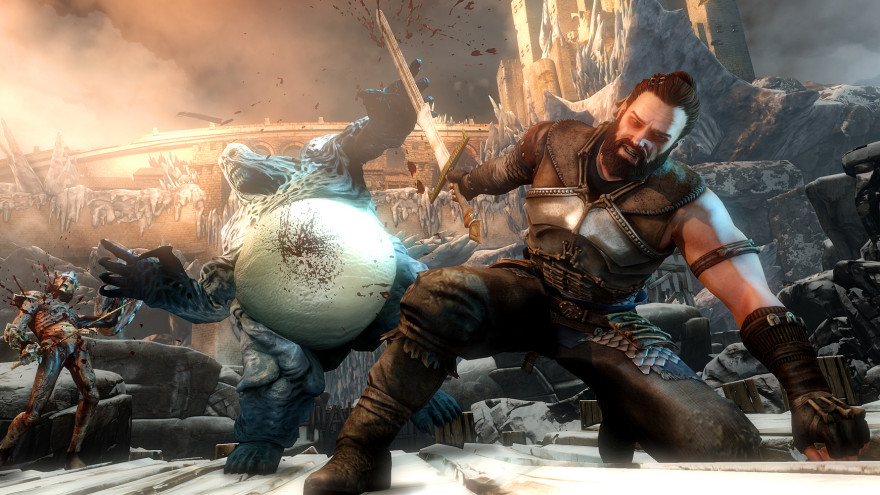 You play as a man or woman named Vulcan, whose features you’re invited to modify before your adventure together begins. You can choose between five largely indistinguishable male faces or five completely indistinguishable female faces. You can choose to have a flat-topped crew cut, blonde cornrows, or a big shock of coiffed anime hair, though as the story progressed I never once encountered anybody who looked like he might be a barber. You can also rewrite Vulcan’s name, and that’s the extent of your ability to customize your character. I chose “Face 2” and “Hair 3” and chose the name Carnovsky, and, feeling emboldened by the bearded warrior staring back at me, pressed X to begin my quest. The next thing I saw was a black screen and a bit of sonorous music. “I doubt I shall ever forget,” began the opening narration, “the strange series of events that lead me to meet the young Vulcan”. But wait—Vulcan? What happened to Carnovsky? I felt cheated. My hero had been forcibly rechristened no sooner than his adventure had begun.

Vulcan is played by Robin Atkin Downes, an actor whose IMDB page lists 33 credits under the title “Additional Voices.” Downes plays Vulcan as if he belonged to a team of wise-cracking Navy SEALs, which makes him an odd fit as the star of a Tolkienesque fantasy. His comrades and adversaries speak an awkward melange of Middle English and magic jargon, rambling po-facedly through seemingly endless pages of expository dialogue before Vulcan, sneering like a schoolchild, responds with a burst of sarcasm and contemporary swears. It’s never clear how seriously we’re meant to take this. Any time the game seems prepared to wink in admission of its own ridiculousness — as when Vulcan, hurried toward the next objective after a boss battle, indignantly declares, “Did anybody just see me kill that big fucking monster?” — it quickly recedes into lore and arcana so thoroughly detailed it’s maddening. It didn’t take me long to learn that I could skip lines of drawled dialogue with the push of a button — possibly the game’s smartest feature. After enduring an hour of painful dialogue I made an executive decision to never willingly listen to another word.

I made an executive decision to never willingly listen to another word.

I managed to glean a faint outline of the story all the same. A shuffling army of skeletal zombies called the Deadwalkers, lead by some sort of nefarious ice demons, are gradually butchering kingdoms to the south of their once-secure enclosure in a plan I assume they learned by binge-watching Game of Thrones. Vulcan belongs to a group of mercenaries called the Freeborn Blades—though I’m not sure in what sense these men were born free nor in what sense anybody else was born into bondage—who have been commissioned to protect a small band of magicians as they perform a ritual we’re told may “change the tide of war.” This occasions Vulcan to ruminate meaningfully and say things like “You have to fight fire with fire—so they say.” Naturally, all does not go according to plan, and soon enough a bit of misdirected magic bestows our sardonic hero with the power to burst into flames. Thus it is up to you to muster enough interest to restore order to this thinly conceived world.

I confess I could not. The only thing duller than watching Vulcan talk about demons and magic, as it happens, is leading Vulcan into battle against demons and magic, and Bound by Flame consists of little more than alternating between the two. In battle, as in character creation, the game boasts another pretense of choice: players are invited to select between three styles of combat, whose relative merits and limitations you’re encouraged to negotiate to find a balance best suited to your preferred manner of play. But difference here is an illusion. Whether you opt to wield a single broadsword two-handedly or seize a pair of lighter daggers, combat remains more or less identical: either way you’re left to hammer away furiously on the attack button, dodging whenever an enemy telegraphs their intention to attack. Occasionally you may choose to set your sword alight or fling a fireball into the air. It doesn’t really matter. Enemies hit and get hit and die just the same.

Bound by Flame has a tendency to poke its head in now and again to check in on your progress, and when it does it likes to remind you of the various activities you’re ignoring and options you’re not using. You can upgrade your weapons and armor by forging together sundry ornamentation. You can create items and spells by combining refuse you collect from vanquished foes and chests littered incongruously throughout the land. Both of these tasks are accomplished more or less automatically in sub-menus that I had no interest in looking at. Neither of these tasks are necessary, or helpful, or anything like fun. Thankfully, Bound by Flame makes it easy for you to skip, bypass, or altogether ignore nearly all of its ancillary elements, including such trivialities as story, dialogue, character progression, inventory management, combat strategy, and navigation.

Discovering the trick to that last one was particularly relieving. Bound by Flame’s approach to level design is to construct narrow paths that loop and digress pointlessly, like the brick-walled maze in that old Windows screensaver. Eventually I learned that you can pull up a translucent map that would overlay your game while allowing you to continue moving, and from that point on I simply kept the map on screen and sprinted in whichever direction the map instructed me. The levels all look the same—some with wintry trimmings and some with jungle trimmings, but otherwise identical—so I wasn’t really missing anything except last-gen graphics and thrifty background repetition. So much of Bound by Flame induces boredom or irritation that it seemed the best recourse to seek out a style of play that facilitated, if not outright enjoyment, at least an absence of hostility. Well, better that an aggravating game permit you to play around its points of aggravation than to force you to suffer them in earnest. In the case of Bound by Flame, I merrily sheared away until nothing remained.