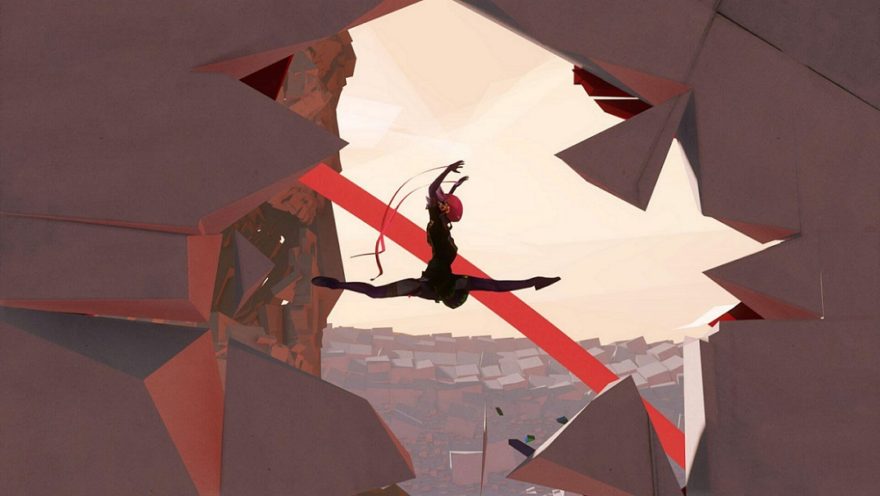 I was eight years old when I watched my first ballet performance, the Nutcracker, at an old, musty local theater. When the show ended, my mom asked if I wanted to be a ballerina, and to her surprise, I cringed. There was no way I could be a ballerina, I insisted. My body, short and stubby, could never be so lithe, yet strong. To be a ballerina, I thought, would be to somehow transcend the human body’s limits. To my childhood self, ballerinas were these inhuman, majestic creatures who, in their bending and gliding, could tell wordless stories. Ballerinas were beautiful to watch, to be sure, but I was scared of the power they held within their seemingly frail bodies. How did they not break?

Bound reminded me that ballet is simply a medium to express what it means to be oh-so painfully human—and maybe to be oh-so-painfully female. As Russian choreographer George Balanchine once said, “Ballet is woman.” The bodies of ballerinas bear scars and stories just like our own, and their graceful movement is but a metaphor for the ability to endure, to retain grace and stability, despite all odds.

I hadn’t expected a videogame to show me this.

As I played Bound, I was reminded of an essay written by Virginia Woolf in 1903, “A Dance in Queens Gate,” where she observed how dance has the power to “stir some barbaric instinct” so that “you forget centuries of civilization in a second … oblivious of everything save that you must keep swaying with the music—in & out, round & round—in the eddies & swirls of the violins. It is as though some swift current of water swept you along.” Her connection between dance and the flow of water through imagery is clear: “This one night we will be mad—dance lightly—raise our hearts as the beat strengthens, grows buoyant—careless, defiant.”

For Woolf, water, or the ocean itself, like a woman’s body in motion, is constantly in the process of change, and that similar ability to convey a natural flow is central in dance. That movement, that seamless fluidity, is part of what makes ballet in particular so mesmerizing. Women ballet dancers were viewed as the ultimate feminine ideal because of their fluid, inhuman movement: the epitome of elegance, poise, and control.

It is apt, then, that Bound begins with a heavily-pregnant woman sitting by the ocean while she dreams of ballerinas. Bound is a game about a ballerina known only as the Princess, who dances and flows through the metaphysical landscape of the pregnant woman’s consciousness. The Princess is a faceless, sylph-like creature with dark green skin and long limbs, whose every movement is a purposeful ballet move: she does not jump; she performs a grand jeté and flies. She does not walk; she glides across the floor, arms elegantly outstretched. Even when you stop playing the game for a moment, the Princess does not rest; she pliés or stretches. Nor does she fight: she pirouettes, spinning until the binds that hold her have no choice but to release. She is always a body in motion, balanced and stable, among fragments of memory. If fluidity is necessary as a metaphor for illustrating the features of memory, the passage of time, and processing of emotions, as some scholars have suggested, then perhaps using a ballerina to to tell the story of Bound makes complete sense.

As might be expected, the game presents no clear narrative: all we know is that the Princess must stop a giant creature known only as the Monster from destroying the metaphysical world. But the Monster never actually physically engages you—he only screams at you from afar, which somewhat dampens any sense of urgency. This fantasy realm requires no fighting; only dance through expression, which in itself perhaps is a way to tell some kind of story. There are, of course, questions presented, such as who the woman on the beach is, what her connection to the Princess is and, most importantly, what the Monster symbolizes. It’s these questions and the unique visuals of the world, however, that drove me to keep playing in lieu of a clear driving purpose.

the Princess does not rest; she pliés or stretches

It helps that it all takes place in a gorgeous world, one filled with bold color, reserved and minimal in detail, but complicated in movement—the vast world’s topography constantly shifts and undulates as the Princess moves through it, building and depleting as she interacts with the walls and floors around her. It’s an endless sea of the immaterial world whose architecture I can only think to describe as dreamy Wonderland meets Escher. Nothing is fixed in this realm, giving the player a feeling of initial discomfort and disorientation, but the game teaches you to revel in the freedom of movement. Even if the tessellations dissolve beneath you, you will fall into fragments of an ocean, only to quickly return again unharmed. You’re allowed to start anew and learn from your mistakes.

At the same time, the immaterial realm that you navigate as the Princess can appear so fragmented that it’s difficult to tell what is purposeful and what is a glitch. And because the camera keeps moving even when the Princess has stopped gliding forward, I often found myself having to look away from the screen to stave an emerging headache, which quite literally threw me out of the fantasy. So much movement—coming from the Princess herself, the backdrop of the realm, or the fragments directly around her—often became too overwhelming for my eyes, as if my own body was rebelling against any association with ballet due to its inadequacy. The game interactions were also not often responsive, and sometimes the Princess would jump further than needed. With the poor camera movements, and the Princess’s sometimes over-dramatic leaps and pirouettes, figuring out depths and lengths for jumps was frustrating, and I fell into the fragmented ocean of memory more times than I’d like to admit.

But, for me, the biggest problem with Bound is that five minutes of play was enough to give me a central idea of what it is all about: unlike games such as Abzû or Journey (2012), the visuals don’t keep changing, urging you to play longer just to see what beauty the game can show you. Most “levels” or sequences of memory within the immaterial realm that the Princess navigates are visually very similar, and the structure to complete those levels are the same: the Princess must travel through the realm, collect fragments of memory, watch the fragmented memory about the mysterious woman on the beach, travel back to the beginning of the level, and finally return to the real world to the woman sitting on the beach. In other words, every level is simply a different iteration of the same fragmented setting with similar color schemes and design. Soon, everything starts to look the same, which is a disappointment, and feels like a missed opportunity. After all, another aspect of why I found actual ballet performances like the Nutcracker so fascinating were the various stage backgrounds that were constantly changing, able to stimulate and stir its audience in various ways.

But, despite all its flaws, Bound is undoubtedly a celebration of the female form, both physically and spiritually. And, for that, it could be said to be a game better viewed as one to experience rather than to play, and the fact that it tries to encompass so many deep psychological metaphors in the videogame format is an ambition worth praising. In this sense, like the lithe, seemingly frail body of a ballerina, Bound carries a heavy story—one that may be too heavy, so much so that the rest of the game suffers a little. Yet, I appreciate that, through the hypnotic dancing of the Princess, I was given a window into the psychological landscape of a woman, while also experiencing her life and regrets. In that way, Bound, on some level, has helped me demystify and even relate to the inhuman ballerina form, but the poor mechanics in the game forced me to clumsily traipse through the landscapes I yearned to glide through, shattering the fantasy that in the world of Bound, even I could be an elegant prima ballerina.