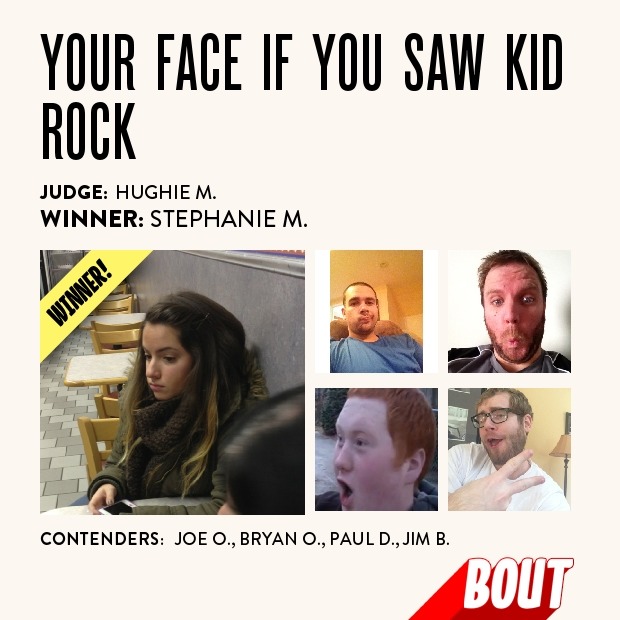 Bout, a self-described “photo-taking game” is a rare mobile game that works almost as well as a spectator sport as it does an exercise in in-group hilarity.

You play by starting a photo challenge – you can write your own, or select from currently available gems along the lines of “animal you most look like” or “something you shouldn’t drink” or “best Spiderman”. You share that “bout” with your friends, who then presumably rise to the challenge and take a photo that best/most awesomely represents that statement.

Here’s where the real “game” begins:

Once your friends have submitted their own photos, these are then revealed to a judge, anonymously. From here, the judge selects the winning photo based on the entries they received. Coins are then awarded at the completion of each “Bout.” Ten coins are awarded to the winner, and the other players get two coins each for simply taking part. “[These] can be used to refresh the challenge prompt list, start additional Bouts, unlock themed challenge bundles and create custom Bouts,” the company explains.

The app is free, with microtransaction support for fast cash (coins, rather).

It was made in collaboration between CollegeHumor and Awkward Hug, presumably because there aren’t enough funny (and punny!) pictures in the universe, and also because this is a brilliant idea. I’m actually a little shocked that the Instagram generation hasn’t had a specific app/game that banked on our obsessive need to take photos of everything yet.

Awkward Hug is known for its offbeat work – in fact, my colleague Jason Johnson wrote about Must Love Robots, a previous Awkward Hug project, in Kill Screen Issue 4’s “Alternating Reality”. The team has an amazing manifesto and describe themselves as being “fascinated with the awkward space between our real and digital lives”

So a gamified photo-hunt experience is really right up their alley.

What makes Bout stand out (even above the concept) is just how well this works as a metagame – or meta social experience, perhaps. The game operates as a content aggregator – only the best photos will go to the official Tumblr, folks will undoubtedly share their triumphs via their own channels, and the official Facebook page allows even non-Bout-ers to participate by playing along with mini-caption contests of existing photos. In this way, it’s just as fun for spectators as it is for the competitors, and Bout looks to become a social sport with genuine mass appeal.