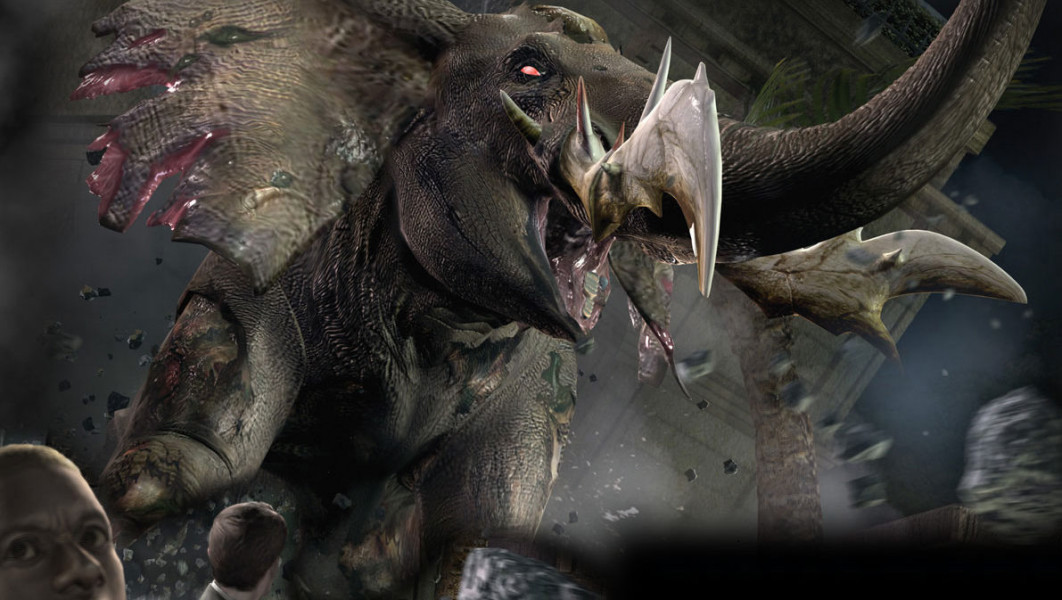 Over the next few weeks we’ll be taking an in-depth look at some of the best examples of videogame cover art and exploring what makes them significant.

You’ve just spent the last few weeks dodging the T-Virus and smashing in the heads of any lumbering undead human that wants to feast on you. You’ve somehow managed to down an infected elephant named Oscar, but when you see your rescue helicopter in the distance, you notice that it’s on fire and the pilot is dying an agonizing death outside its doors. You’re deflated. What’s left after this? How much hope can be proven false? Is there any escape from post-apocalyptic doom? Or is every single evasive action just a delaying of the inevitable: being consumed by a horde of hungry corpses?

Capturing such an atmosphere is integral to any zombie-themed piece of art, be it videogame or otherwise. The zombie genre, at its best, taps into two very primal fears: 1) our fear of being hunted, perhaps our oldest (if somewhat dormant in our “civilized” age) concern and 2) our fear of the unknown. More specifically, the zombie genre allows us to place ourselves in a world where the rules and regulations that we rely on every day to keep us sane and give us guidance become totally useless. Pure chaos ensues. This is the mood that Capcom’s Resident Evil Outbreak: File #2, released in North America in 2005 for the Playstation 2, captures so perfectly with its box art.

There are two predominant versions of the cover, but both achieve the same effect; the only difference is in the background. Each cover depicts a struggle: one guy trying to pull another guy (with a gun) out of a sewer with the hands of the undead trying to keep him in. The shot is cropped so that we only see the forearms and hands. Depending on which cover you look at, the background is either black or a Stephen King-esque mist. The image is terrifying and perhaps one of the most vivid depictions of what post-apocalyptic survival might look like, where the choice between saving your friend and saving the gun needs to be made.

The true beauty of the cover is in the details, though. This is a cover that’s about making the player feel claustrophobic. Sure, the zombie genre thrives on a sort of expansive emptiness, a world so empty, yet so dangerous. But Resident Evil Outbreak: File #2 also understands that the real panic doesn’t come from hordes crossing open fields; it’s being trapped in close quarters with them. Capcom puts us in the shoes of the man in the sewer. We can feel the cold, peeling hands grasping at us, the teeth digging into our skin. The uncomfortably close cropping of the cover only accentuates this feeling. This isn’t cartoonish gore; this is straight-up dread.

How do I know? Because the guy being pulled into the depths to face an unthinkably harrowing death is wearing a watch. A watch! What a gruesome detail to add; it’s the mundane being consumed by the unknown, something tiny and tangible to make you imagine the specifics of such a demise. Here come the hordes to devour everything we used to consider normal, the box seems to be seeing. This isn’t the world you once knew. There are new rules and the odds are stacked horribly against you.