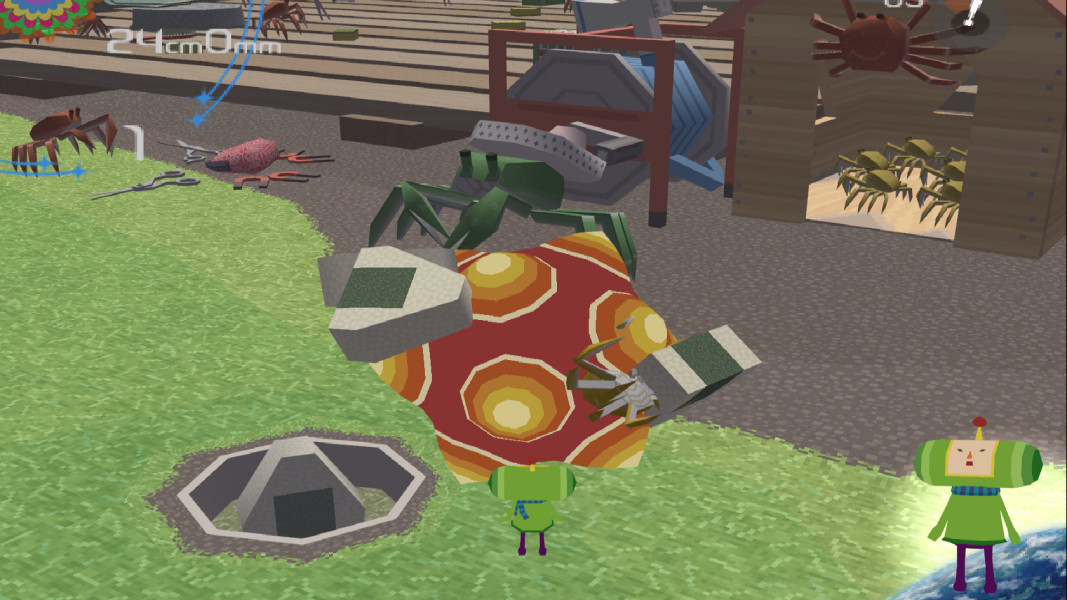 At their very core, many videogames are about consumption and collection. Whether it’s collecting gold coins, extra skills and spells, or seeing how many helpless women you can save with your brooding, malcontent masculinity (hint: too many, still, in 2014), there’s a certain rush in filling our digital coffers with stuff. In fact, videogames could be seen as an appealing argument for economic neoliberalism. You know that thing you want and crave? Go take it. See that working-class dwarf who occupies a single-bedroom home and makes ends meet by selling produce at the local market? That house can be yours with one swift swing of your sword. The imagined worlds of many videogames make it clear that your highest goal is the possession of things; to amass wealth and trinkets and goodies just because you can. Margaret Thatcher would make a great Skyrim character mod.

Katamari Damacy takes consumption and makes it surreal. It puts you into the shoes of a prince who looks like a cross between Arnold from Hey Arnold! and Finn from Adventure Time and demands that you push an adhesive ball around collecting objects until you can, essentially, rebuild the cosmos. Never has the daunting reconstruction of the ethereal been so much fun, and the cover art for the North American release on Playstation 2 succinctly captures that atmosphere of joy. There’s the idyllic, pastoral setting accentuated by bright blue skies, green grass and a full rainbow; and in the distance, a gigantic ball of stuff. The beauty of Katamari Damacy was that it had no pretensions. The gameplay was simple and effective, perfectly suited to both daylong binge sessions and late night turns with friends, all while looking like Takashi Murakami’s superflat aesthetic applied to the wide-open expanses of a millennial platformer.

The cover is equally uncomplicated, yet still manages to inspire a sense of wonder. Imagine being a kid seeing this for the first time on the shelf. The metropolis in the distance looking miniscule next to a giant ball made up of a baseball stadium, an octopus, a ferris wheel, an airplane, and—my personal favorite—a blue whale, all heading toward those cows, so utterly (sorry) helpless. What the box art does is convey what so many self-serious videogames forget to: a true feeling of awe and possibility. When was the last time box art—not a demo walkthrough, not an alt-rock laden YouTube trailer, but the actual box art—got you hyped to play a game? That’s what the cover of Katamari Damacy does. It understands that for many people, the appeal of videogames is in participating in/controlling something unfamiliar. The box art for Katamari Damacy assures you that once you crack the seal and slide the game into the tray, you’re in for an inimitable experience.