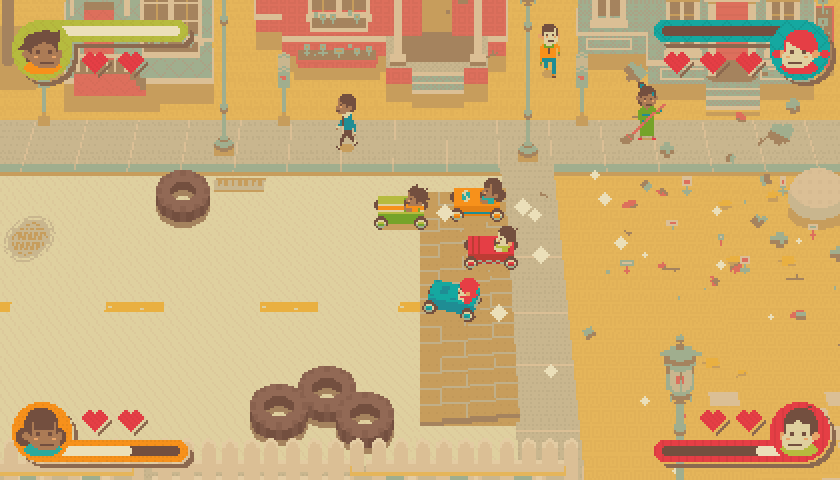 Whether it’s the rampant mechanophilia or that I just don’t have the patience, racing games never interested me. The unfortunate side of this is that, as a kid, my dad would try to bond with me through videogames—one of the very few of our shared interests—but he would always insist that we either play a soccer game or a racing game. These are the two dullest types of videogame in my mind, but are his favorites.

With that being said, there were exceptions that we’d settle on as a compromise. Red Card was the soccer game I’d happily play: it tweaks the permissiveness of the referee so that it’s near-impossible to get a red card. This meant I could spend the whole match slide tackling my dad’s players, hacking away legs and committing numerous fouls, and get away with it. I wasn’t playing soccer; my heinous effort was closer to how you’re supposed to play a fighting game.

Rather than the leader of the pack being first, they’re last

As far as racing games went, it was TOCA Touring Car Championship—yes, a proper car racing simulator. And why? It had cheats. Enter your name as “TANK” and you could beep the horn to shoot at other cars. Probably the best one was “CMLOGRAV”, which would turn on low gravity. This meant I could drive round the track the wrong way and line-up head-on collisions with incoming cars to send them spinning into the sky. With the cheats, TOCA was my cartoonish vehicular playground of choice before Grand Theft Auto came along.

With the exception of Mario Kart (and maybe a few others), racing games have since lost this optional silliness that appealed to bozos and troll-racers like me. It’s all so very serious now. Perhaps that’s why an “anti-racing” game was produced by a small team during the Toronto Game Jam 2014.

Boxcar Brats makes a simple change to the rules of racing games that drastically alters how you play it in order to win. In short, it inverses the winner-loser logic. Rather than the leader of the pack being first, they’re last, and the person winning is the one right at the back. So, your goal is to remain in last place, which may seem easy—”just don’t move,” you may be thinking—but it’s not when your car automatically accelerates.

What you end up having to do is build up your brake meter by crashing into people, haystacks, and tire walls (and all the other clutter you can find). A secondary tactic is to cut up people behind you to send them spinning. What’s most confusing, at first, is getting used to the camera following the person who would traditionally be in last place. They set the speed, and if you drive beyond the scope of the camera then you lose one of your three lives. Lose them all and you’re out. The winner is the last one still driving.

Unsurprisingly, I am monstrously good at Boxcar Brats, and haven’t lost to my dad yet. It makes a change to be the one insisting that we play a racing game and to be celebrating rather than groaning at the end of it.

You can download Boxcar Brats for free on itch.io.