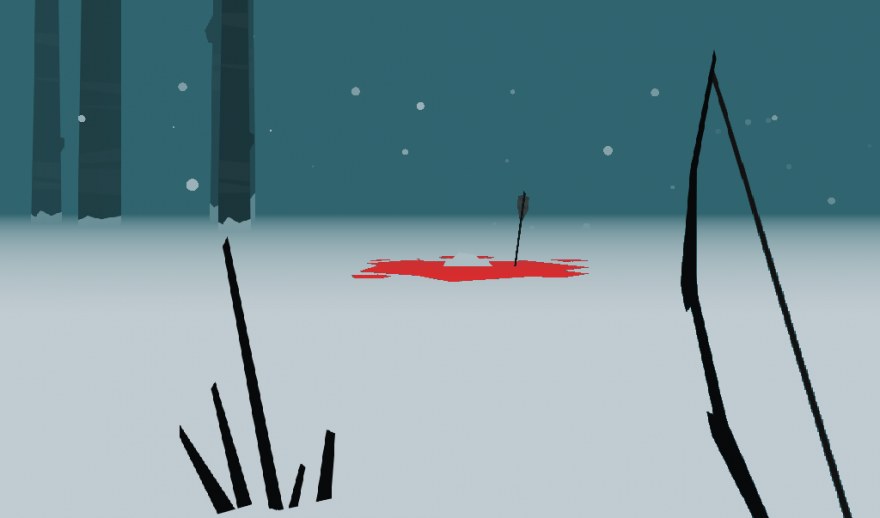 I didn’t find the monster in The Howl, but I knew it was there: a looming silhouette out in the blinding white of the forest’s sparse horizon. I’d get a glimpse in the corner of my eye and ready my bow, but then the violent winds would start up, casting a layer of snowy fog to obscure my vision again.

Braving the blizzard only gets me more lost than before, but standing in the shelter of a dead tree until the calm returns puts more distance between me and whatever it is I’m hunting. I have to keep moving, collecting more arrows, practicing my aim on the snow rabbits that cross my path, keeping an eye on the colorless horizon for that fleeting glimpse of movement that draws me onward.

I’m starting to think this is all in my head, that there really is no beast to track and that the blinding whiteness is just playing tricks on my eyes, but I return to The Howl anyway for its atmosphere and tension. It reminds me of Vlambeer’s Yeti Hunter, which is set in an equally desolate, frozen wasteland, though I’m not sure if I’m also hunting a yeti in The Howl, and even less sure of how to find whatever it is I am hunting.

Getting around is the hardest part. Strange landmarks dot the forest, from crossroads signs and Blair Witch-esque stick sculptures, to tall stone monuments and what seems to be the remnants of a cabin, only a wall with its window frame in tact, but none of them help me on my way.

I’m drawn back to The Howl

The only thing I can really rely on for direction is the way the wind blows, carrying flakes of snow with it, but even then, I get turned around so often that it’s possible not even this is consistent.

Still, I’m drawn back to The Howl. It’s a bit buggy, but its slow pace and the long stretches of land to cover make even its smallest discoveries feel special, and the idea of finding that elusive creature even more so.

Download The Howl on its Ludum Dare page or itch.io for free.