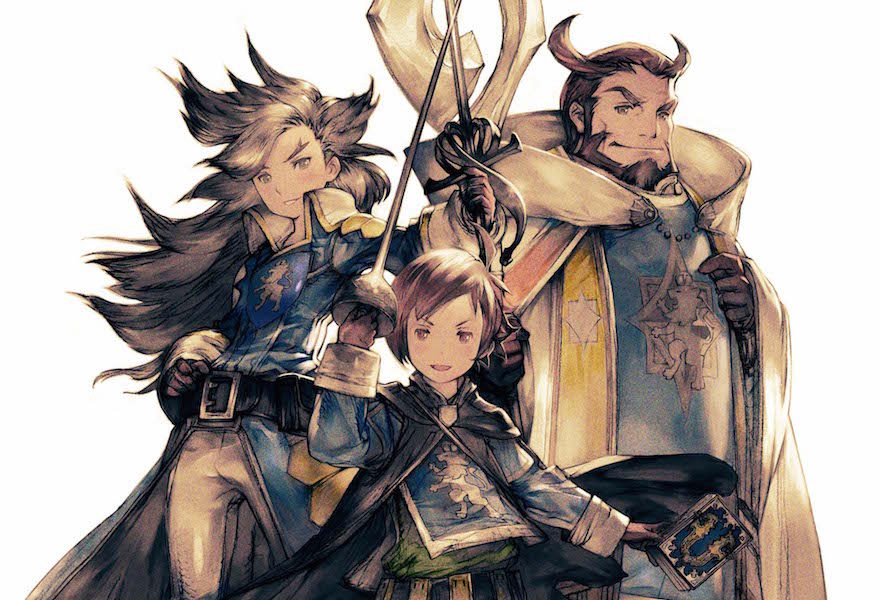 Bravely Second is as unfortunate a title for a sequel as Bravely Default was for its predecessor. Where the phrase “Bravely Default” seemed to suggest that it would somehow be valiant for you to keep doing whatever you would have ordinarily done anyway, “Bravely Second” is poised to become a snowclone to tag onto any sequel that boldly exists in spite of the fact that no one especially wanted it. Horrible Bosses 2: Bravely Second. Or, a slight tweak on the form, Harry Potter and the Cursed Child: Bravely Eighth.

Of course, the title isn’t as bad as it seems once you’ve played the game—though it is worth pointing out that that’s not usually the way titles work. For those who aren’t familiar with the first game, Bravely Default referred to the series’s innovations in what was otherwise—Phoenix Downs and all—a traditional Final Fantasy-like role playing game. The series’s combat system adds “Brave” and “Default” to the usual menu of RPG options for spending your turn: Attack, Item, Run, etc. Braving allows you to take multiple turns this turn at the expense of future turns, while Defaulting puts you on the defensive this turn with the benefit of allowing you to take more turns next time.

It might be a solid way to gamify teaching you to save for retirement if Defaulting rewarded you half as often as Braving does. Instead, the mechanic adds a bit of gambling logic to the usual RPG my-numbers-versus-your-numbers confrontation—mirroring, to my mind, the false choice around whether to stay or hit in blackjack. If you brave against an enemy you don’t think you can kill this turn—the equivalent of hitting on 17—you could bust, or you could score a dramatic win. Which, as in blackjack, is thrilling if you win, but, if you’re playing pot odds … well, then you wouldn’t be playing blackjack anyway.

Clever as it is, the brave/default system has the unfortunate side effect of emphasizing what is surely the worst part of this type of RPG: the empty grinding that defines so much of the time you spend with the game. Grinding is a bit like living, only without any occasion or obligation to remember what you’ve done. It offers so little in return for our time that we feel excited when we’re paid out a pittance like a dropped item or a level-up in return for hours of crushing recursion. Victory against a strong enemy immediately feels good because it seems to be the natural conclusion of all that came before it, the pains you took to reach the requisite level. But interrogate that feeling of fiero even for a second and you recognize that all the grinding was a sufficient, but in no way necessary, condition for you to feel like you won something consequential.

Part of me has always felt that grinding is a perverse form of job training, a way of building those lauded 21st-century workplace values like grit or working off the clock. The brave mechanic attempts to (and here too I find myself falling into the language of business) streamline some of the genre’s conventional repetitiousness by allowing you to enter multiple commands at once, doing away with weak enemies without having to play through several turns making the same choice regardless of what happens during combat. But in planning four moves ahead, you recognize the emptiness of most encounters, realizing that you were always already going to make the same four choices over and over. This is further amplified by an “auto-battle” system, whose logical extension would seem to be a game that plays itself, merely encouraging you to check on it once in a while to see how well “you” are doing. To return to the cubicle simile, the Bravely series’s innovations feel more like a new version of Excel than a fulfilling job. Its improvements aren’t so much ways of bettering your life as they are freedoms from what arbitrarily held you back before.

Look closer and the connections between “the daily grind” and this form of “play” multiply, spiral out, form fractals. In order to use the game’s titular Bravely Second system—which allows you to stop time and do massive damage to, usually, a boss, a form of sanctioned corporate revolt—you have to spend Sleep Points, which accrue at a rate of 1 for every 8 hours of gameplay—or, to drive home the obvious point, 1 for the typical amount of time you’d work for a day’s wages. Time thus becomes a minigame chugging away quietly in the background, staying your fatigue from yet another (auto?) battle with the promise that, soon, you will have earned your sleep. Rather perfectly, you can also buy your way out of this time paradox if you’re sufficiently wealthy/impatient by plunking down stray dollars for Sleep Points.

connections between “daily grind” and this form of “play” multiply

I don’t doubt fans of this type of RPG will recognize my criticisms, even if they don’t countenance them. Perhaps they know something that I don’t, that play is more fun with/as labor. Or else they have long since accepted that play and labor need not be separate, or can be separated in context even while unified in action. I rather coldly put myself at a distance from “fans of this type of RPG” at the top of this paragraph, but the truth is that before playing Bravely Second, I would have counted myself a part of that group. I played a more or less unconscionable amount of Pokémon and Final Fantasy growing up. By trying to optimize it, the brave/default system inadvertently lays bare the arbitrariness structuring the player’s relation to the game, the role one ostensibly plays becoming repeatable and, indeed, automatable in yet another striking parallel to the looming “new economy.” In fact, I wonder if an optimistic reading of Bravely Second isn’t as a critique of the RPG tropes it relies upon. After all, the main character, much too punningly, is called “Yew,” after the opening cutscene addresses “you” the player separately, just in case you didn’t pick up on the homophone. But, to give credit where credit is due is to withhold it where it isn’t; and that idea seems to leave open a possibility that just is not there.