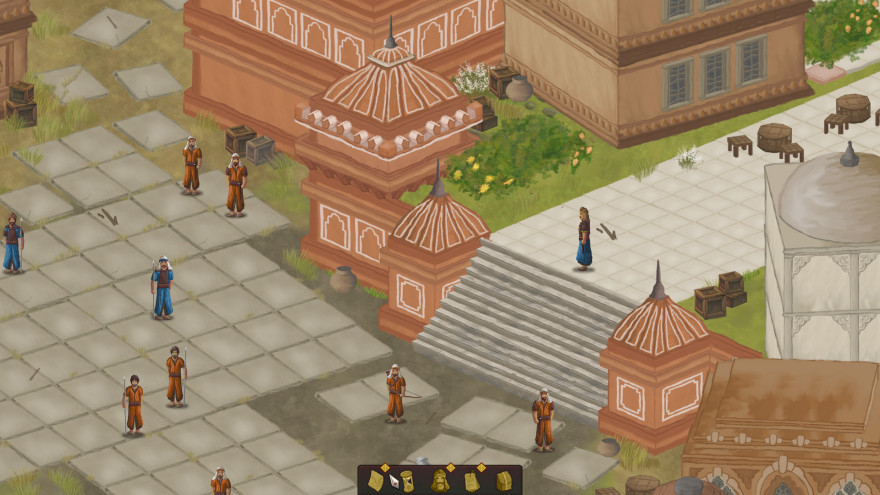 One of the most important verbs in roleplaying games is rest. A calm, a pause, a moment for the player to collect her breath, and for the characters to heal before the next major battle. There is no sight more comforting after a long campaign than a town with an inn. Unrest, a new game by Pterodactyl, gets its name from the politically volatile times its characters live in, but it’s also a sharp stab against traditional roleplaying games. For the characters there is no safe place.

The player, too, isn’t allowed to settle in. This is not a hero’s journey in three acts. Unrest switches between several protagonists. Some are trying to get armies ready to defend the city, others are simply trying to find something to eat. Some of the protagonists are actively working against one another, others are working in tandem without knowing it. Asha is the princess of Bhimra one day, and hiding in its slums the next, watching as people slowly starve waiting for the drought to end. Tanya is a farmer’s daughter who dreams of the big city; she’s stuck in an arranged marriage with a boy who can hardly stand her, but is from a better caste. All the while, there are whispers of rebellions in other farms. There is Chitra, the ambassador for the Naga, giant snake creatures, who knows that race relations are getting more fraught by the day, and walks the knife’s edge of appeasement and self-interest that most diplomats must. In each chapter the city of Bhimra, loosely modelled on the architecture and society of ancient India, becomes bigger and grander. Unrest is a modest game with an ambitious scope.

There is violence everywhere, but aside from a few awkwardly implemented fights—all, thankfully, optional—there is no combat in Unrest. There are also no experience points to worry about. Without that baggage, the choices in Unrest feel unencumbered with the cold calculations about resources that most roleplaying games ask of the player. It freed me from “gaming” the story and instead letting it unfold. Most of Unrest is either spent walking through the city or talking to its people. Each conversation opens up a window with multiple options of what to say, and how it’s said. Instead of having the hero force their will onto the world around them, other characters are rarely ever argued with. They are not people waiting to be convinced, but people who clutch their beliefs close.

The shorter chapter structure allows the writers to tell stories that don’t usually get told. Tanya’s story, my favorite by far, is a short coming-of-age story about a young woman starting to realize what her future might be, and the player deciding if she wants to accept it or rebel against it. It is also a story about what women have to do to eek out a bit of power in a man’s world, about the different shapes marriage takes, about the complicated relationship between class, money and opportunity. It works well enough as its own story, but the other chapters give it an underlying sense of tragedy. When Tanya speaks of escaping to the city, the player knows the reality of her dream and why it won’t work. Characters from other chapters appear and through Tanya new facets of their personality emerge. Unrest‘s best writing is saved for chapters that don’t involve the main political conflicts, showing instead how normal lives are affected by powerful forces that cannot be fixed with an 30-hour single player campaign.

Unrest‘s faults, then, are not mechanical but narrative. The regicide that kickstarts the story is abrupt, happening in a paragraph of text between a character transition. Its gravity is mostly lost. The prologue, too, feels like the weakest chapter in the game. It’s too short and fails to set up the main conflicts. Some of the characters stay too one-note. The villains, like xenophobic religious leader Ranveer, get moments to be sympathetic, but are very clearly “the bad guys,” losing the nuance needed to make some of the choices involving them interesting. But its rough start and drab, plain art are worth getting past. Unrest is a short, smart work. Most roleplaying games are about those in power, but Unrest is also about those who aren’t.