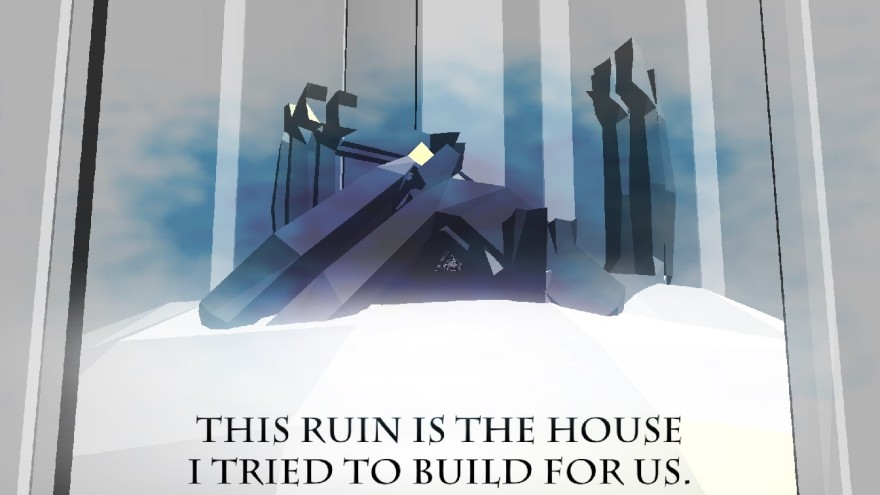 What’s your breakup song? Mine is The Weeknd’s “What You Need“. Those chord changes break my heart, and helped to ease the wrenching misery of having a four-year relationship pulled away from me. And that’s exactly what you’re after when seeking a breakup song; to be reduced to tears, soaking the night’s pillow with liquid memories.

If the immediate seconds following a breakup were a videogame, this would be it.

If music doesn’t rake the hurt out of you, then other salves include: eating chocolate by the grid, watching devastating rom-coms back-to-back, and sinking into Nora Ephron’s novel Heartburn. No videogames spring to mind, though—none that would work to ease the wounds of lost love, but plenty that would temporarily distract from the matter at hand. So, maybe a handful of new, painful vignette games by Stephen Lavelle are among the first breakup games.

Prolific, experimental game creator Lavelle has been making personal games for years, so much so that, if you were able to pull apart the abstraction and metaphor, you could piece together parts of his life, and his feelings in each moment. I’m not sure of the context for his latest batch of games—and don’t wish to pry into his personal matters—but he’s released five of them across a couple of weeks, all dealing with the struggles at the end of a relationship, as well as the immense overhanging post-breakup grief.

The first one, Gesture, captures the feeling of a relationship slipping through your fingers. You walk past all your failed efforts to create gifts for your lover—the fabric scraps that were supposed to be a dress, a discordant unfinished symphony, a house you didn’t build—and then it closes on a single hopeless line: “at least I had some ideas.”

Clearly, your desperate efforts weren’t enough, as in having said goodbye, you find yourself alone in the overwhelming grey pits of a breakup. The character drags themselves along, the weight of an insetting depression pulling on each leg, their whole body heavy with upset. You move them towards a small set of stairs, and upon reaching the steps, they sit on them to rest their head deep into their hands. The game never leaves this cutting posture until you hit Escape. If the immediate seconds following a breakup were a videogame, this would be it.

Lavelle might be using game creation in a therapeutic manner.

It gets better if not any easier. In happy, we revisit memories that are found inside the torsos of party-goers. The companionship we yearn for is found in partial view, just out of reach. We cheer up, but in wear & tear the grinning visage is revealed to be a quickly expiring mask. It gradually dissolves but is prolonged by the presence of a loving entity. It doesn’t last as they disappear, leading us to realize that it’s not the mask that we miss, but them. Finally, Vigil reveals how the breakup has affected our sleeping pattern. We’re kept awake at night despite increased efforts to escape the troubles swirling in our conscious mind. The thoughts never leave, and seem to manifest as a sign of Armageddon right outside our window.

Given that Lavelle recently made Click click click, which muses on the impossibility of understanding how love works, and that he’s previously told us that his personal games are a performance of his emotions, I’d hazard a guess that these new games reveal he’s recently experienced a breakup.

The frequency and themes of these game releases suggests that Lavelle might be using game creation in a therapeutic manner. Rather than trying to lock away the hurt into a written diary, or stow it in boxes of possessions upon which memories cling, he captures it inside a videogame.

Worryingly, he also told us that these personal games don’t help to get something off his chest; “it usually makes me feel a little worse,” he said. I can only hope that that isn’t the case this time as, judging by the pain inside these games, it seems he could do with a break. If nothing else, at least these games might help someone else going through a breakup. I have a feeling they could.