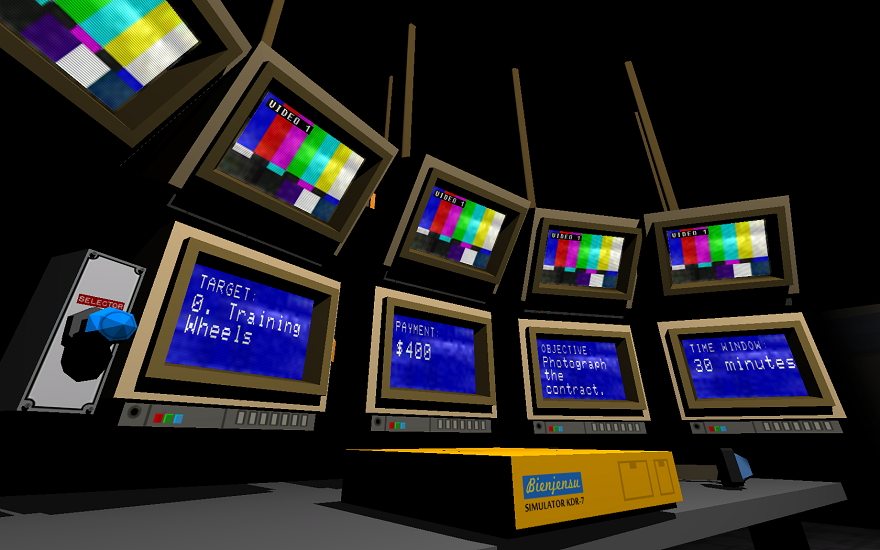 Videogames are full of force fields. Even games with expansive worlds, such as Skyrim, or ones designed to alter story based on player interactions, such as The Walking Dead, shelter the player. Whether it’s immovable items used as static background decoration, or a long cutscene that halts all action, games remind us that we are some parts player, most parts spectator.

But Brendon Chung of Blendo Games wants to change that. Quadrilateral Cowboy seeks to allow the player as much explorative freedom as possible, with no need to be burdened by a complex narrative. The premise is bare: In an alternate reality in the 1980’s, you and your crew of agents build a company to aid megacorporations with illegal jobs, such as sabotaging other companies and revealing secret documents. This is where the story ends and player expressionism begins.

This leads to a fuller connection between the player and the world inhabited. Without a cutscene or text forcing narrative, it’s up to the player to figure it out her role in the world through deduction, experimentation and exploration.

The desire to examine a game’s world without stopping is not new to Chung. His previous games, Thirty Flights of Loving and Gravity Bone, lack both in-character dialog and cutscenes. The stories are told through actions, by constantly moving forward. Quadrilateral Cowboy differs from these earlier works in the complexity of that forward movement; here, the player will need to hack to progress.

Chung compares Quadrilateral Cowboy to Deus Ex and System Shock, two stealth cyberpunk games heavy with hacking computers and causing overall anarchy. But unlike those games, the hacking is quite literal. There are no bare-bones minigames that show hacking as picking which numbers are static in a row of flashing ones. Instead, Chung used his inspiration from MS-DOS and C Sharp to create a syntactical language similar to programming. Though he was hesitant to call the mechanic real programming, the syntax is what gives the player the sensation of writing code.

This makes sense: As an amateur level designer, he came to programming once his skills in level design could not accomplish all he wanted. “It was a great feeling,” he said. “I was able to change a number somewhere … and it unlocked this whole part of the game that I wouldn’t have had access to if I was just using the standard tools.” The manipulation of computer programming brought a better understanding of how a computer language works for Chung. In Quadrilateral Cowboy, the player will get to relive this: environment manipulation brings a better connection for the player to the story.

The game’s story is stitched into an interactive environment, inviting the player to either wander, or skip exploration and proceed to the main action. Chung says if you want to pick up a flower pot and put it on a window, you have the ability to do that, and there’s true pleasure in knowing you have personalized your adventure in some new way that has nothing to do with gameplay.

For his upcoming game, Chung just wants players to express themselves in more ways than customizing a character’s wardrobe. Even the language you use to search computers or break cameras is an expression of who you are, not as a player in a game, but as an inhabitant in an unexplored universe waiting to be uncovered.

Quadrilateral Cowboy is scheduled to release in 2014, but if you’re interested in the game’s development, you can find development live streams on the Blendo Games’ Youtube page.