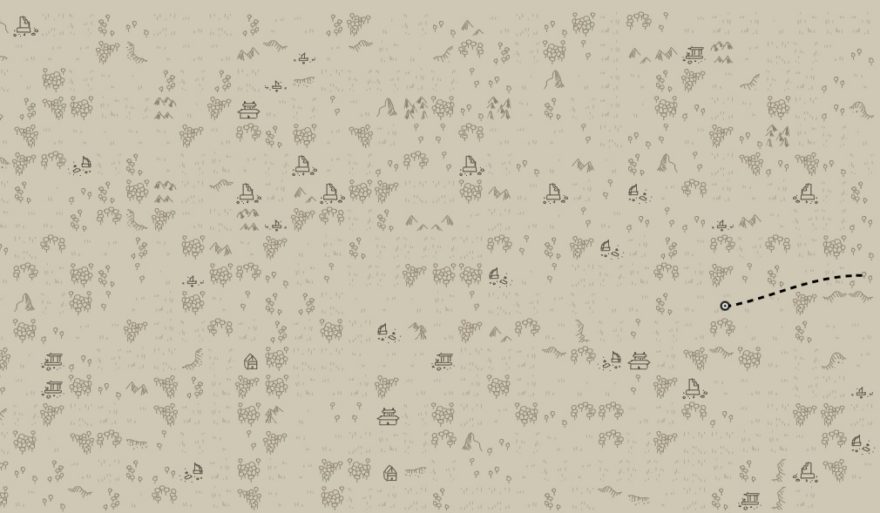 I missed the latest game by Brendon Chung (creator of Thirty Flights of Loving, Quadrilateral Cowboy) when he released it last month, but it’s certainly worth highlighting. Called Acre 6, it’s a deconstruction of the classic RPG, full of jest, made for the Procedural Generation Jam.

It starts you out with a map marked only with icons for areas of forest and landmarks like temples, ruins, and villages. The only interaction available is to move the mouse to guide a circle, representing you as the player character, who journeys across this map leaving a dashed line behind them.

After a short distance, a text bubble should pop up at a point in your journey, informing you of some event that happened there. You might find an item, defeat an enemy, purchase or be rewarded something, perhaps complete a quest or level up. The names of these events and items are procedurally generated and represent the typically absurd use of adverbs and nouns of the RPG (and fantasy literature too). I first found a “Famous Brick,” later hypnotized a “Nutty-Tank Fox,” and then purchased a “Faucet of Wicked Lo.” Here, Chung makes an effective joke out of the scrambled language that procedural generation is so conducive to.

He goes further. As each of the events burst into view, you gain experience, represented by a bar that fills up at the bottom, while the top of the screen hosts a bar that depicts the progress of each act. In the top left corner you’re informed of the date and how many years your journey has taken. Chung writes in the readme file for Acre 6, that it’s inspired by one of his favorite games, Progress Quest. It’s a similar game that removes all the depicted action and larger systems of the RPG and leaves only progress bars in their wake.

Acre 6 essentially does the same as Progress Quest, but it also adds to that the map, which starts out as a site of exploration, but is overwhelmed by the pop-up events of the player’s journey. It brings to mind the way that open-world games rarely leave players to explore a map alone, instead dividing them into various landmarks that can be navigated to with waypoints. It’s become something of a running joke that every open-world Ubisoft game will decimate its map with an atlas of icons showing the locations of side quests, dialogue opportunities, and viewpoints. This is what Acre 6 satirizes with its own map of messy and overblown annotations.