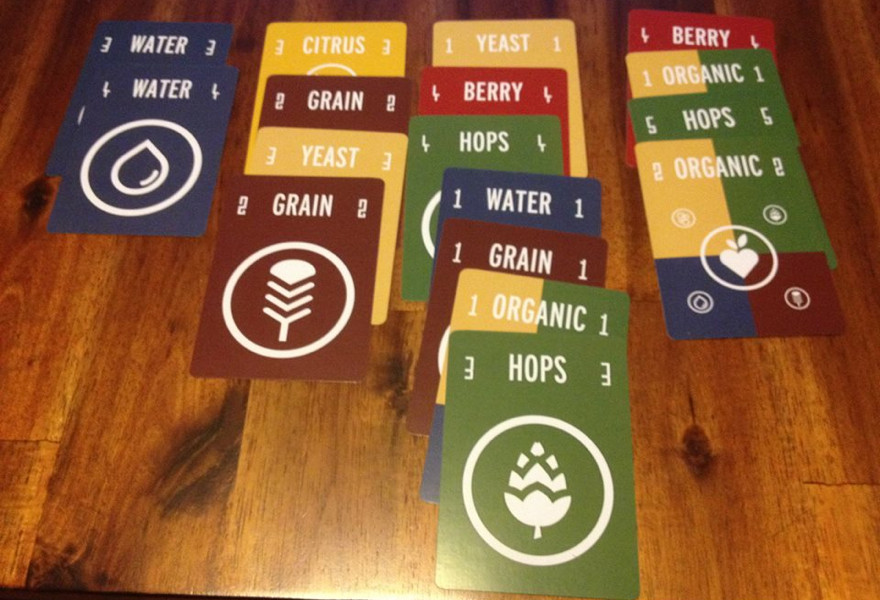 Walk into your local brewery or bar on an average night, and you are likely to see a table of patrons huddled around a game. Tabletop games are no longer the consolation prize for those who arrived too late to find a billiards table; they are serious attractions. In the wake of Cards Against Humanity’s success, a wave of tabletop game developers have sought to make the sort of lightweight games that thrive in these casual settings. Alex Hague, the creator of Monikers, talks about wanting to make a game you can “take to a bar or to a concert and pull out and have it not be embarrassing.” He is not alone in that regard. “There’s an interesting trend of breweries carrying board games at their locations,” says Adam Rehberg, whose game, Brewin’ USA, just reached its initial funding target on Kickstarter. “There’s almost a symbiotic relation between board gaming and bars.”

“a game where you scored points as you drank more beer”

Brewin’ USA, attempts to bring the worlds of beer and tabletop gaming even closer together by challenging players to build the “best craft brewery in the nation.” It began life, however, as a more literal drinking game. “I thought to myself it would be great to create a game where you scored points as you drank more beer,” Rehberg admits. That was nine months ago, when he first had the idea for Brewin’ USA while driving home from work. “The game does not reflect that at all,” Rehberg quickly clarifies. “I’ve really developed it as more of a gamer-game instead of a drinking game.”

The road to suds superiority is divided into three phases, each of which approximates the craft brewing experience. Each of Brewin’ USA’s rounds opens with an auction for the ingredients needed to brew beer: grain, water, hops, and yeast. In the second phase, players can launch a beer if they own all the ingredients listed on one of the game’s beer cards. Beers can be launched in untapped markets or players can choose to vie for control of a location by triggering the game’s third phase: a brewfest. The outcome of a brewfest is determined by the quality of the ingredients that a player possesses. These phases are repeated in successive rounds until a player has successfully launched three beers. To that victor go the spoils, though, in all likelihood, everyone then drinks.

Rehberg comes from a family of avid tabletop game players. He describes them as “cutthroat as can be.” This experience shaped his approach to game design, which sought to heighten the opportunities for conflict within the brewing process. Though it is not a literal representation of the market for brewing supplies, the auction creates a more contentious bidding environment. Brewin’ USA forces players to contend with limited startup funds (represented by bottle caps) and locations that can be occupied. “The game is designed so that there’s not enough space for everyone,” Rehberg explains. “I really wanted game mechanics to be based on a lot of interesting player decisions that could lead to conflict because they’re vying for the same resources and same territory.”

Brewin’ USA, according to Rehberg, is as an “abstraction” of craft brewing: conflict is heightened but the underlying elements of the beer-making world remain. This is particularly true when it comes to the game’s ingredients and beer (recipe) cards. “I’m a home brewer by hobby,” Rehberg explains, “so I wanted to make sure there was an accurate assortment of beer styles: your pilsners, IPAs, stouts, and porters.” Brewin’ USA has all the ingredients to make these beers and, if its Kickstarter stretch goals are achieved, will offer more ingredients to make a wider variety of beers. As a home brewer by hobby and chemical engineer by trade, developing these recipes allowed Rehberg to nerd out. “I took a look at what ingredients are used in a typical recipe for beer and created those recipes to somewhat accurately reflect what is happening in the world.”

Rehberg’s ramped up vision of craft brewing—think of it as House of Cards with porters instead of politicos—is gradually winning over breweries across America. “If someone wants me to send an email to one of their favorite craft breweries, I’ll ask them if they want to be in the game.” This has proven to be a boon to Rehberg’s funding campaign, allowing him to engage with backers. “Starting local, at least in Minnesota, was really smart,” Rehberg admits. “Once somebody sees that, others are a little bit more open to participate.” Now, however, Brewin’ USA has gone national. “We’re trying to get a really wide gamut of craft breweries around the US involved,” says Rehberg. Thus, Brewin’ USA, a game inspired by the contemporaneous rise of craft breweries and casual tabletop gaming, is now very much riding this hop-infused wave.