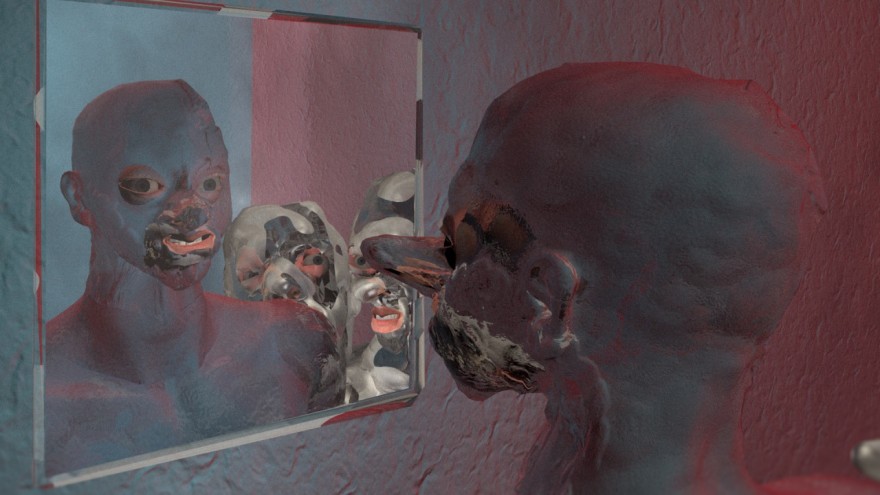 The types of characters we create in The Sims, Dark Souls, and Second Life probably say a lot about us. Most will go for a likeness of themselves, perhaps trimming their outline or ignoring minor blemishes, but generally modelling a sensible humanoid figure. Not everyone. You’ll see them every now and then, the deviants, prancing around in bright red skin with a stretched snout for a face, and enormous bulges in places you believed impossible. These are the people who dare to be different, to be ugly, to rupture the verisimilitude for everyone else.

file it away as “the weird side of the internet”

Rather than role-playing within the parameters of your typical fantasy world, this handful of people stick out due to manipulating the software’s character creation tool at its extremities, finding a virtual embodiment of their artistic expression. It’s here, in this space between imitation and creative expression, that Brian operates. Through his music, videos, and images he tries to find emotion in an electronic context. He shares his discoveries at brianbrianbrianbrian.com.

Most of Brian’s audience seem happy enough with a superficial understanding of his work. They file it away as “the weird side of the internet,” alongside disturbing cartoon series Salad Fingers, and the mutant ballet of Marie Chouinard’s “bODY_rEMIX/gOLDBERG_vARIATIONS.” But, as with these other examples, there’s more to Brian’s assorted creations than strangeness for its own sake.

It started out with music. Brian studied music composition and clarinet performance in college. But, afterwards, he found himself drawn towards experimenting with electronic instruments. He tends to listen to 20th century classical music such as pieces by Poulenc, Shostakovich, and Prokofiev. He wanted to find similar expressive qualities in electronic music as these composers had done with the instruments they worked with. It was to be thoughtful while being more accessible to ears of today.

specific motions and colors tied to the sounds.

“It’s a challenge to do this, because relying on sequencers and software tends to encourage mechanical things in writing (such as a lack of expression/dynamics), but it’s a fun challenge to try and overcome this. I feel that there’s a lot that can be explored in this medium, and the idea of having complete control over the sounds you make is really appealing to me,” Brian told me.

When writing his music, Brian visualizes specific motions and colors tied to the sounds. As he gets deeper into the process, he’s able to envision paths and valleys within the phrases and form of his songs. He even finds departure and arrival points to this imagined world emerging within the perceived expressions of his hardware synths and large sample library.

Additionally, in his album Brian, he uses robotic voice effects in many of the pieces to give the impression of creatures or personalities singing inside these lands. He calls the album an “abstract journey,” with each song acting as a new leg: starting with “Begin,” you then move through the water with “To The Shore” and “Water Song,” while “Emerge” and “Land Song” sees you coming out of it and swooping across the terrain, then “Here/There” is the climax that leads into your exit from this place in the tracks after it.

The exception in this album is the last track, “When I Am Laid In Earth.” It’s a cover of “Dido’s Lament” from the opera Dido and Aeneas. Brian says it functions as the main vocalist’s goodbye song hence it has actual lyrics sung by a distorted machine voice. “I chose to use the voice because I found it so expressive. It felt like I was ripping out all of the emotion that these digital tools could provide. I also love the idea of these digital creatures having a relationship with the ‘natural’ land, which I wanted to explore in Land Song—a digital creature singing an emotional song about nature directly to you,” he said.

bloated thighs that strut with confidence.

Brian’s realization of his universe isn’t limited to his music. He’s gone further by combining it with his visual experiments in Cinema 4D. He says he’s still discovering the capabilities of the software, but loves that it “gives you the option to automate almost any visual parameter,” allowing for accidental creations that go beyond anything you could reasonably plan out. He’ll often mess around with the controls to see what unexpected result he can get, such as this one.

Creating 3D models of people in this way has led to most of Brian’s weirder and most popular work. This usually involves morphing bodies into odd shapes that play with our understanding of how a body can look and operate—expect coiled elongated necks, pizza skin, and bloated thighs that strut with confidence. Some of them would be monstrous if they weren’t so sweet, depressing, or generally confounding. He finds that these strange animated beings are “compelling and oddly expressive” by themselves, but it is in pairing them with his music that something greater materializes.

“What I find especially engaging is when the figures actually look and seem to interact directly with the viewer. For example, in my video for These are the Things We Do, one of the main ideas was that you (the viewer) catch a glimpse of these people in their world, doing weird shit (the things they do, as the title suggests), and they aren’t happy you’re watching them. You aren’t supposed to be there,” Brian said.

The way this is communicated in the music video is through degeneration of virtual skin and flesh. Faces stretch, fold in on themselves, becoming violent in their elasticity. It’s like your presence has upset them so much that these people have decided to destroy themselves out of spite. Nearer the end of the video the skin textures revolt in discordant patterns of garish color. The way these 3D models rip and collide would be considered to be a fault in the professional modelling world. But Brian proves that limiting the art to recreating reality misses a big opportunity space for artists to explore the relationships we have with bodies, and the meaning we impart on other objects too.

This warping of bodies typical of Brian’s work isn’t the sign of an amateur but is a manifestation of the greater expression he’s trying to tease out of electronic formats, just as with his synth music. Given the popularity of his work, it seems that whatever he’s doing has struck a chord with people, and certainly myself. Each image seems to tell a story, and Brian enjoys that there’s no clear reading of what it might be, letting the viewer interpret the scene for themselves. The only consistency is that all the videos, gifs, still images, and music is an exploration of this world that Brian has created in his mind, and is slowly piecing together through electronic expression.

Next, Brian will be releasing new music made with his friend Raphael that he says goes even deeper into the concepts he has been exploring. “It’s a 4 movement work using mostly hardware synthesizers, and I feel is some of the most expressive and dynamic music I’ve written,” Brian said. You can get a sneak peek of this new music and the visuals that will accompany it in this haunting music video for the song “I Hear You Calling Me.”

You can find more of Brian’s work on his Tumblr blog, YouTube channel, and SoundCloud page.