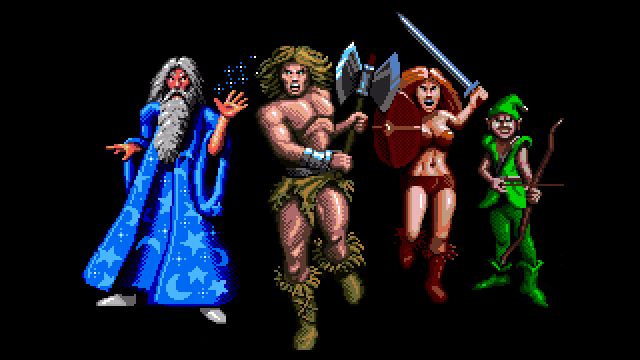 by Ks Sponsors
To say that Rogue is an important game is like saying the Magna Carta is an important sheet of paper. No, Rogue is the mothership, the original document from which all revolutionary thought floweth.
Its origins go back to the days of dinosaur computers and using the alphabet for art. When two Mark Zuckerberg-types sat down to develop Rogue on the mainframe at U.C. Santa Cruz, they had no idea that it would become a campus-wide hit, be rampantly pirated, and spread like wildfire on floppy disks, going on to impregnate the RPGs of the future with principles of ordered chaos, potions of extra healing, and Jungian quests.
In honor of the September 3rd release of Diablo III to the Xbox 360 and PlayStation 3, we took a look at the best roguelikes from the past few decades.
Rogue (1980)

Thirty years the senior of our modern consoles, Rogue was visually unsophisticated. It’s readily available for free on the net, but playing it these days is like trying to read alien hieroglyphs. Forget pixel art; it makes do with the terminal font. Your character is actually a character, the @ sign, skulking past the ferocious B’s and %’s, snaking through spaces physically delineated by a long string of punctuation marks. Some people still prefer their roguelikes this way, which is a testament to how avid the fanbase is.
Gauntlet (1985) 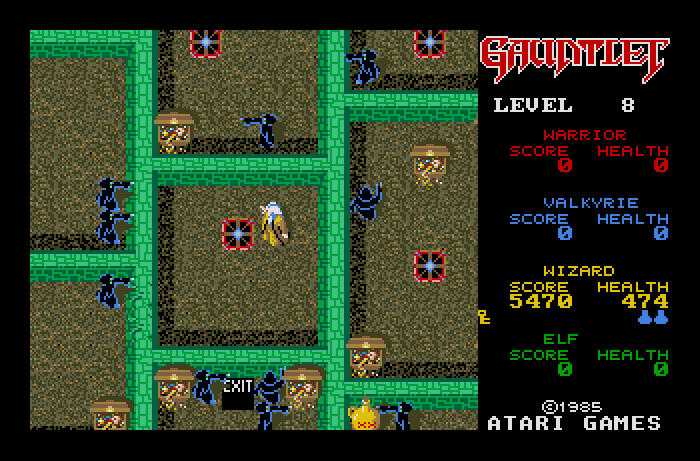 Just a year after Warner sold off Atari to Commodore impresario Jack Tramiel, the (sorta) new company released the first ever multiplayer dungeon crawl titles to arcades nationwide. Game designer Ed Logg was inspired by Dungeons & Dragons and hoped to replicate the experience for the arcade. What Logg didn’t expect is that this four-person crawler would become one of the most profitable titles in Atari’s history. The marketing team worried that four strangers wouldn’t want to play together, but Logg assuaged their fears. Gauntlet was so successful that rival SEGA sent spies to copy its designs.
NetHack (1987)

NetHack took the code and concept of Rogue and asked the question: How far can this logically be pushed? Apparently, to the edge of the unknown. Between 1987 and 2003, the game was frequently expanded by a small, elusive sect of roguelike junkies, becoming less of a hack-and-slash game than a dadaist story generator. Basically, anything was game. You could be seduced by your pet. You could carry booze through the astral plane and give it to genocidal nurses (but only if you were naked). You could sacrifice three unicorns on your way to see the Oracle. The downside? Fan-fic. Tons and tons of fan-fic.
Tales of Maj’Eyal (1998)

Heavily influenced by Tolkien (it was originally called Tales of Middle Earth), ToME, as it’s called, was a product of the dawning of commercial internet. As message boards and internet access spread, this allowed creators of new roguelikes and fans of old ones to trade new titles. An introductory quest sets the scene, but it’s straight high fantasy–a ranger hunts a troll, an alchemist investigates a corrupted land. Even its real-world existence is shrouded in mystery–ToME‘s creator Dark Lord has never revealed his true name.
Diablo II (2000) 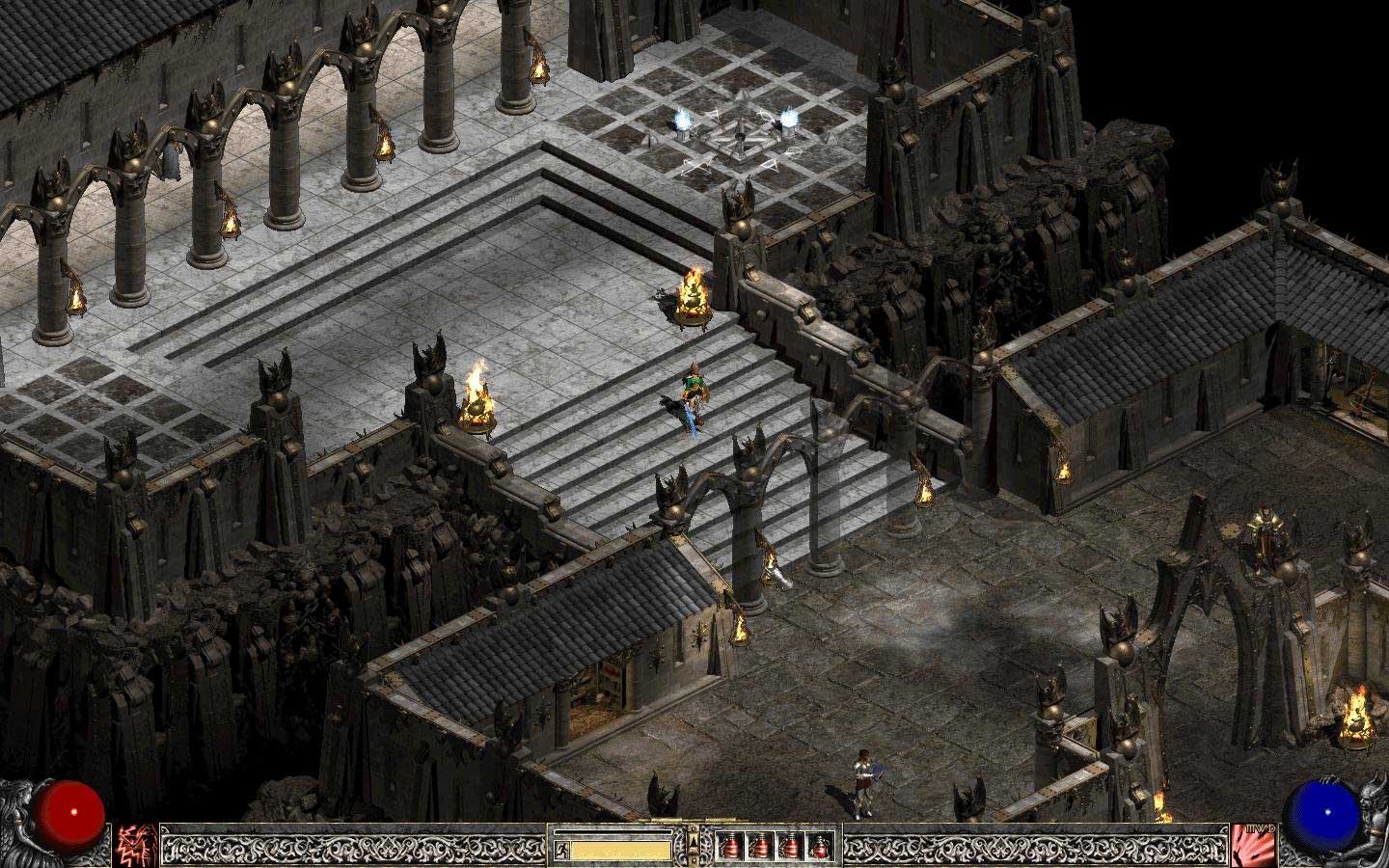 Developed by Blizzard North, Diablo II perfects the formula established its predecessor in 1996. Previous roguelikes operated on their own internal clock. Similar to ye olde tabletop games of yore, you’d move next to a slime mold; take a stab at it; then, stand there defenseless as the fungus had its go. The Diablo series changed that, flooding the screen with goatmen, tentacle beasts, wendigos, and, of course, Diablo himself—all for you to click with lightning fidelity. Yet the games retain that mystery of wading into the unknown, as if the old ASCII Ouija board is there below the surface, coughing up the onslaught from random dice rolls. And of course, these journeys were no longer solo with new access to Blizzard’s Battle.net service.

Following in the cloven-footsteps of Diablo, Torchlight combined the button-mashing of a fun action-packed videogame with the instant gratification of clicking the “Like” button. That is to say, this is the promise of the Information Age actualized. With a right or left mouse click, you can slay gaggles of gremlins, change zombies into portals, transmute chalices into gold, pet a dog, and put on a valkyrie hat. While the game relinquished a fair amount of its rougelikeness for convenience sake (no cursed scrolls or cruel everlasting deaths are to be found, for instance), it still coughs up an onslaught of diabolical fodder—kind of like Facebook compared to an I.R.C. channel.
Spelunky (2009) When Spelunky came out a few years ago, some very semantic, nerdy squabbles over exactly what counts as a roguelike flared up on dark corners of the internet. Since then, there are more than a few “manifestos” floating around. At some point, someone valiantly proposed we call these types “roguelike-likes.” The rest of us? Probably didn’t care, but the debate only speaks to how beloved the genre has become. Spelunky’s excellent blend of platforming and dungeon-diving is living proof that Rogue should be cross-pollinated with anything and everything: sports games, shooters, light-gun games, match-three, the kart racer, and so on. Endless variety and ratcheted-up stakes are evergreen.
Faster Than Light (2012) Proof that the roguelike genre is as flexible and promising as any other, last year’s Faster Than Light applied the classics of the style to deep space. Designed by Justin Ma and Matthew Davis, the indie release was a sleeper hit winning both excellence in design and the audience award at this year’s Independent Games Festival. Ma said that he wanted players to capture the feeling of Picard screaming at his crew to bring his shields online, and FTL‘s frenetic and harried pacing brings one of the most beloved genres to new heights.