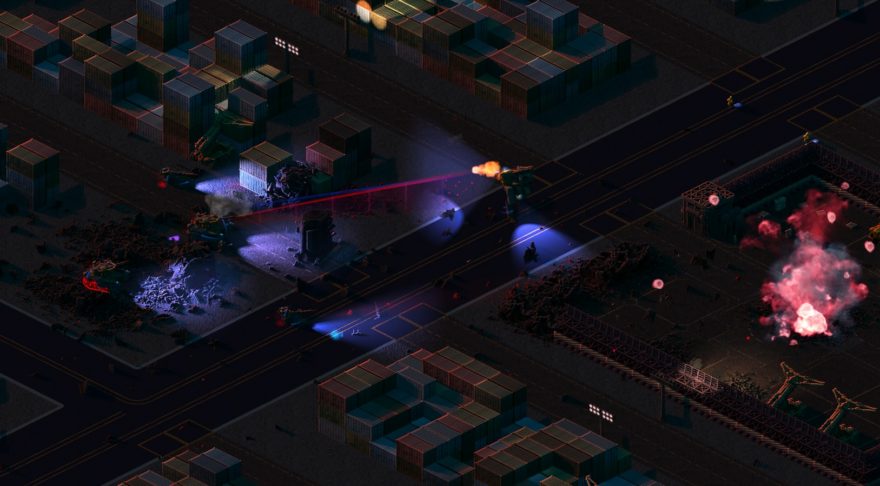 In late 1864, the American Civil War had come to a decisive point. The Confederacy’s efforts to bring the war to the North had been effectively routed in the previous year, and the South was forced to take the defensive on its home ground. Ulysses E. Grant, General of the Union Army, sought a way to break the South with minimal loss of life. He found his earth-scorching muse in William Tecumseh Sherman, who proposed a simple strategy that proved to be devastatingly effective. Sherman would have his forces march south through Georgia, and where commanders met with anything less than full cooperation, their orders were to “enforce a devastation more or less relentless according to the measure of such hostility.”

Although the Union Army didn’t target civilians, everything else was fair game: “mills, houses, cotton-gins, &c.” Sherman’s “March to the Sea,” as it has come to be known, accomplished just what he promised: it demoralized the South, and left their infrastructure in tatters for years to come. But Sherman took no joy from his victory. In a speech to soldiers high on the fumes of destruction, he cautioned them against confusing military necessity with moral triumph: “There is many a boy here today who looks on war as all glory, but, boys, it is all hell.”

Brigador has little use for such hand-wringing. It plunges you into the middle of a different civil war, and gives you only one objective: blow shit up. Each of the 21 campaign missions—all of which have their own maps and distinctive, throbbing EDM scores—gives you a specified list of targets to destroy, but as the game likes to remind you, nothing is out of bounds. From the vantage point of your mech or tank or modified shortbus, you are free to “enforce a devastation more or less relentless” as the mood takes you. Need to get to the other side of that apartment complex? Steer right through it. Don’t like the way that statue is looking at you? Blast it with your double lasers, and call it a day. The more damage you incur, the more money you accrue; it’s a futuristic mercenary’s dream come true.

That the game gives almost no thought at all to the human cost of this destruction could be troubling. But Brigador doesn’t buy into the perfidious morality of this year’s The Division or Homefront: The Revolution, whose mistake is to present their violence as justice; this game is quite clear about its amorality from the beginning. You, the citizen of futuristic space colony Solo Nobre, are a contract soldier working for the Solo Nobre Concern (SNC). You earn money by destroying things, and your in-game reward is to buy more stuff to destroy more things. There’s no question of motivation or allegiance, except to the extent your contract requires it. It may be unethical—but at least it’s honest.

Meanwhile, there is a whole constellation of political intrigue surrounding you. The game’s plot deals with the death of Solo Nobre’s Mao-ish “Great Leader” and various factional efforts to usurp his power. But although the differences between these factions are strategically clear —sometimes you fight the loyalists, sometimes the separatists—the game seems uninterested in vilifying or vindicating any of the parties involved. To the extent it considers the populace at all, it is with an almost comic indifference: “Nobreans are proving more resistant to the present SNC restructuring than expected,” you are told in one mission briefing. The solution, in this case, is to destroy four statues of the Great Leader to demoralize his supporters. And elsewhere: “Though the SNC disagrees with the late Leader’s plans for the future of Solo Nobre, his blacklist is remarkably close to our own.” War can be convenient, if everyone wants the same people dead.

It may be unethical—but at least it’s honest

The delightful irony of Brigador is that for all the focus on conflict, actually succeeding in these missions usually requires you to forsake your appetite for destruction. You can destroy everything, but some of those things have a nasty habit of blowing up in your face, terminating what might have been a grueling half-hour crawl across the map. Since there is no saving within a mission, and ammo is limited, you quickly learn that it is safer to only destroy what you need to. And even that can be quite a challenge. Brigador isn’t a particularly complex game, but it is an exacting one, and it forces you to have an almost flawless command of each of the three different control schemes (which apply to three different types of vehicles) to get through the campaign.

If the game’s backstory feels somewhat undercooked, it is distinguished by this precise attention to the details of combat. Not only are there different control schemes and vehicle types, but there are numerous shapes and sizes within each type, all with distinctive sets of weaponry. Since different maps require different kinds of approaches—some are closer to stealth missions, while others are inevitably full-screen shootouts—much of the game’s considerable challenge lies in figuring out which of the four available vehicles are the best for a given mission. And bigger isn’t always better. The game’s most memorable hurdle comes in a level appropriately called “Joy Bus / Hell Ride,” which requires you to guide the speediest available mech from one end of the level to the other and back without ammo as waves of kamikaze attackers fly at you from all sides. In moments like this, the game completely transcends its native mentality—blow shit up—to become an almost balletic negotiation of speed and place.

At a basic aesthetic level, the game is also a treat. Each of the 42 maps were hand-drawn by the small team at Stellar Jockeys, and the work shows. Nightclubs and business hubs pulse with light and flavor, while the sprawling neighborhoods of suburbia feel appropriately placid and ripe for upheaval; there’s no better way to work out suburban ennui than to drive a minibus through a goalpost. And the game’s soundtrack, by Makeup and Vanity Set, provides an immaculately glossy accompaniment to this colorful world. In a different kind of game, Solo Nobre’s atmosphere might have been a rewarding one to live in and explore for its own sake. One yearns to dip into the nightclubs, and peek in the windows of those loyalist townhouses. But such is Brigador’s bent that all this beauty is there to be demolished. If the game has any message, it’s that the only thing more rewarding than admiring a lovely cathedral is watching it explode. War may, as Sherman said, be hell—but it is also a hell of a spectacle.