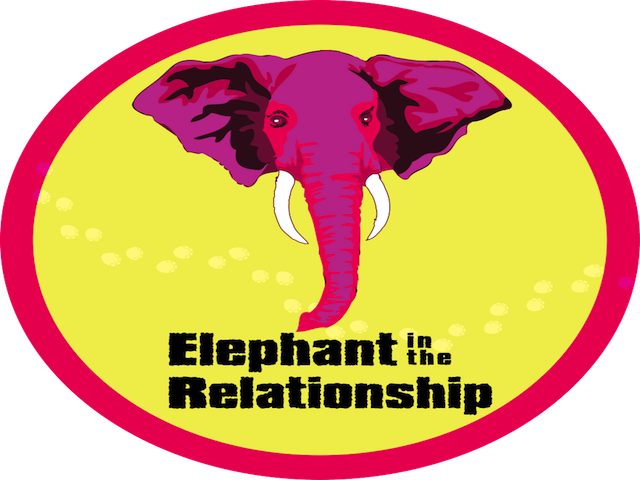 Elephant in the Relationship was easily a highlight of Arse Elektronika 2012. The game is simple – players are paired off, and one participant is given a relationship issue to try to explain to their partner, without referencing it directly. Players are armed with markers and whiteboards, and hilarity tends to ensue – unless, of course, you’re playing with a real-life partner and a too-close-to-home problem. That’s the idea.

The game easily proves that the mechanics of relationships are just as – if not much more – interesting than the rote elements that 99% of games are built on, and offers an intriguing mix of role-playing and refreshingly applicable problem solving. Oh, and sex.

The design team, Michael Annetta, Casey China, Andy Uehara and Joshua McVeigh-Schultz, chatted with us about games as relationship builders, thinking outside the box, and allowing sex come into (game)play.

Kill Screen: First of all, I’d like to ask a bit about your backgrounds – what got you all interested in boardgames in general and what interested you about creating a game with core relationship/communication themes?

Our team comes from diverse backgrounds and our interests are at the intersection of gaming, interactivity, and health.  But in addition to our day jobs, we are all in committed relationships, so we thought why not mix the two? Too often we see or personally experience relationships, whether between couples, relatives, friends, colleagues, etc., which are strained due to an “elephant in the room.” By making this game, we hope to create a safe and fun space for people to address – and perhaps resolve – the elephants in their relationships.

Where did the basic idea for Elephant in the Relationship come from? Were you inspired by any particular event or previous work?

EitR originated in an advanced game design course at USC from a design prompt for a serious game. The original prompt tasked the team with looking at “peace” and “melting” as two potential game mechanics, so early ideas looked at world peace and global warming as themes.  These didn’t provide us with any particularly interesting ideas until we changed our scope from the global to the local.  Ultimately, EitR was inspired by a desire to overcome communication hurdles (“peace”) that emerged in a relationship between two members of our design team. After being together for several years, they had to temporarily live in different cities and work on maintaining a long-distance relationship. New relationship issues came up during their phone calls, and they found themselves devoting time to discussing and resolving these issues. During a brainstorming session, this experience was shared (vented) with the rest of the team. Because everyone could relate, the group decided to make a game about communication and relationship issues. 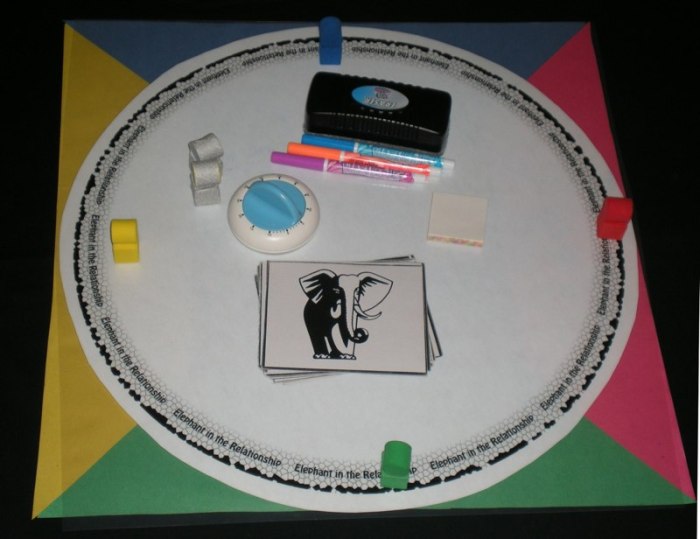 How did you feel the inclusion of sexual “elephants” went at Arse Elektronika? Did it radically change the nature of the game, or merely enhance what was already there?

The primary game is about relationship issues, covering all relationships (romantic/sexual, business, parent/child, sibling, etc.) so sexual Elephants were always already part of the original game, but just a part.  For Arse Elektronika, we were happy to expand on this topic and add more content specifically related to sex and sexuality and the issues that might arise in those specific relationships.

What is often most exciting for us in watching playthroughs of the game is that moment of surprise when one player turns over the Elephant card and gasps or laughs with a realization of “Oh, man, I can’t imagine how I would deal with this issue if it was in my real-life relationship”, but then dives right in to play.  One of the great things about this game is that it uses the magic circle to define a safe space to explore difficult issues and because the players willingly enter that circle, they start engaging in serious contemplation of how to address similar issues in their real-life relationships. The players at Arse Elektronika were all very game savvy and very sex positive, yet there were still those wonderful moments of shock and awkward laughter from players and observers when a difficult issue was in play, so I would say it really enhanced what was already there.

We have been play testing EitR for over a year. We believe in playtesting extensively to fine tune the game, so we have shown it at many venues. The original version included a few Elephants related to sex, so for Arse Elektronika we took those Elephants and expanded on them to address sex and sexuality. A lot of the results of playtesting with the sexier, Arse Elektronika version dealt with rewording some of the descriptions for, say, a particular fetish that the general populace might not be familiar with. We had to include parentheticals to specifically define those for the players, even though in a real-life situation, both members of the relationship would clearly be familiar with the more clinical terms.

Do you have a particular idea or experience you’d like players to come away with?

How many people have tried the game out with real-life romantic partners? What have the results been?

Many of our playtesters tried the game with their real-life partner. A few mentioned that they were scared to try it together, but they did anyway, so we hope that EitR helped to break the ice on some previously unexplored issues. In a few cases, the real-life partners could read each other so well that the Elephant was guessed rather quickly, which may have indicated a pretty healthy relationship, open to communication.  These players suddenly became relationship models for other players and observers.

Finally, do you plan to release the game commercially at some point?

We hope to release the board game version of Elephant in the Relationship soon, and plans are in the works to follow up with a digital version.