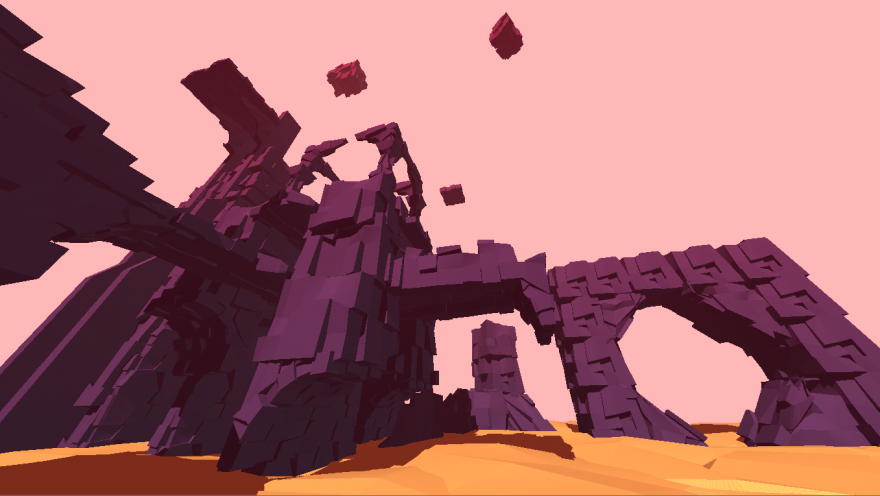 Mark Johns is chasing a ghost. This is what he tells me. It’s not quite the truth. The spectral quality of this “ghost” isn’t immateriality; interfacing with it isn’t a problem, Johns has done that thousands of times. The hard bit, and the bit he’s after, is understanding it.

The ghost is actually Spelunky: a procedurally generated action-platformer that Johns declares “might be the greatest videogame ever made.” But Johns reaches for metaphor, as he’s the kind of guy to give into the lure of theatrics if given the chance. He lives in the moment. Snatch him a boiler suit and goggles and he’d probably be happy to act out a Peter Venkman fantasy, ghostbusting down a busy street, making sound effects with his mouth. “What’s all this about?” a passer-by would ask. Everyone, even Johns, has forgot.

“no one as of yet has quite managed to capture the magic of the game.”

But he’s serious when I talk to him. And what are we actually talking about? “The allure of procedural generation is that a game world can be different every time you load it up. The promise is infinite variety within the possibility scope of the architecture the designer creates,” he says. Oh yeah, we’re talking about Spelunky and the brilliance of its procedural generation.

Johns explains to me that what he finds compelling about Spelunky is that it still surprises him. He’s been playing it since 2008 and there’s still more for it to reveal to him every time he goes back. The trick is in how Spelunky‘s 2D levels are generated. Each level is divided into 16 squares, each of which are filled randomly with an architectural variant from a pool of about 50. Once done, its systems then make another pass over each square in the level to add further randomization before adding traps, enemies, and items. Coder and artist Darius Kazemi has explained all this in much further detail before.

For Johns, the key to using procedural generation in a videogame level is hitting the balance between linearity and a random mess. Spelunky is the epitome of that for Johns. This is why he’s chasing it. And he’s not the only one. According to Johns, also chasing this ghost is Edmund McMillen with The Binding of Isaac, as well as Jan Willem of Vlambeer with Nuclear Throne, and pretty much anyone who incorporates roguelike elements into their game these days. “Despite Spelunky‘s influence on other developers, no one as of yet has quite managed to capture the magic of the game. If you talk to JW about Nuclear Throne, for example, he’ll still say that he’s trying to figure out how to instill in it the feeling of surprise and possibility that you get in Spelunky,” Johns tells me.

randomness isn’t interesting by itself.

The common mistake that Johns sees people making is using randomization techniques to lazily add more content to their game. He posits that randomness isn’t interesting by itself. This, he says, is the wrong way to do it. Ideally, when bringing in procedural generation, you need a “firm foundation of game design principles, flow, and ideally an awareness of narrative structure, the systems you build will reflect it,” according to Johns. It’s the difference between having a hyperactive toddler splash smears and shapes across a piece of paper with a paintbrush, and having an artist like Pollock do it.

For many players, these differences might be too subtle to pick out and analyze, as they lack the expert eye necessary. But the argument goes that most would feel it upon playing. That is ultimately what Johns is chasing—that immediate connection with a virtual space, and an appeal that lasts throughout multiple replays. He doesn’t want players to learn a linear path, nor does he want them to be overwhelmed with pure chaos, he’s all about “giving players a chance instead to learn the laws that govern the universe they’re presented with, responding in real-time to novel situations based on the heuristics they construct from their past attempts.” He wants players to co-write their adventure with him, which he reasons is what led to Minecraft‘s popularity, as players “created the story of their experience in that world themselves, as they discovered its laws and very literally formed their environments themselves.”

All of what Johns tells me is knowledge that he’s putting into the creation of Gibson Hyperdrive. Oh, wait a sec, we’re back to the theatrical side of Johns again. I’ve got to present it as GIBSON HYPERDRIVE. All-caps. A game that Johns claims “rises from the ashes of a fallen neofuture and arrives, crashing through your doorstep into hyperbole.” He bloody loves it. What is GIBSON HYPERDRIVE? I wish I could tell you. At first, Johns described it to me as a “mystery FPS.” But it has since become clear that it’s an improved version of an older collaborative project (“arcade-style motorcycle parkour”) of his called Terror Bikes. The idea is that you’re riding a vehicle through a strange dimension, desperately hurtling across procedurally generated spirals and crooked peaks as you try not to crash or fall off the track. There is shooting, somewhere.

GIBSON HYPERDRIVE isn’t the first shooter to use procedural generation. Johns is all too aware of this. In fact, his motivation for working on one is due to the frustration he has with those that are currently on offer. Their topography is too often comprised of straight corridors and box rooms and therefore lack that smack on the lips that Spelunky has. According to Johns, the way many designers of procedural shooters offset this bland architecture is by putting the focus on randomized weapons and items. “So while the levels feel samey, your options in how to tackle them are constantly changing,” he says. “I’d like to bring the focus more to the levels themselves, and worry about item variety later.”

The idea is to create level structures that invite exploration and offer challenge after many playthroughs. As this is is what Spelunky does, Johns has studied and mirrored the techniques in hopes of applying them to a first-person format. “I first made a really quick prototype with just a few random level chunks made of 3D primitives,” Johns said. “I shuffled around and connected them to each other in random ways, and it was instantly compelling.” But it’s not enough to take only from Spelunky as that’s a 2D platformer and GIBSON HYPERDRIVE is a 3D shooter. So Johns looks to other shooters for inspiration, but many modern ones focus too much on creating a real sense of space, ones that procedural generation doesn’t lend itself too. For GIBSON HYPERDRIVE, the shapes of levels need to be more abstract. Finding the answer took him all the way back to the near-beginning of the first-person shooter: the original Doom.

Look at a classic Doom map from an overhead view and you can see how all the different chunks slot together. Notably, these levels are non-symmetrical, comprised of irregular shapes with strange angles, and blend a range of smaller and larger spaces. This was all authored, of course, most of it by John Romero. And it was in watching a recorded playthrough of the original Doom levels that Romero did with IGN that Johns found his inspiration. “The first thing I try and think about is ‘what would be a cool look?'” Romero says in the video. “So this area here is interesting, just because it gives you possibilities: I could go left, I could go right, what’s that flashing light? What’s through here? Oh, an elevator?” What Romero proves here is that at this early point in the history of first-person shooter and 3D level design what mattered the most was presenting a wide variety of interesting tactical setups and exploration opportunities for the player. The narrative that so often dominates modern shooters through cutscenes and scripted events was, instead, found in navigating these hostile environments in Doom. The lore that did exist was restricted to a couple of words in a level’s title, such as “Toxin Refinery” and “Command Control.” This gave a lot of room for abstraction.

Johns incorporated these 20-year-old design lessons, which were abandoned long ago in favor of realism, into GIBSON HYPERDRIVE. He kept twisting pillars, hanging them on the edge of sky islands, adding etches and nooks, half-eroded castles sitting on mountains, stacks of arches. The results speak for themselves. These are the chunks with which his systems will piece together entire levels as is the case in Spelunky. It’s all very sensible, designed, and planned out. It is the serious side of Johns that spoke to me. But what it’s setting up is for that moment-to-moment expression that Johns so easily slips into. He wants his players to embrace that, too, as they fly at hyper speed through his carnival of architecture, living in two-second increments of absolute hyperbole.

You can follow the development of GIBSON HYPERDRIVE on the TIGSource forums. It will be coming to PC and Xbox One.