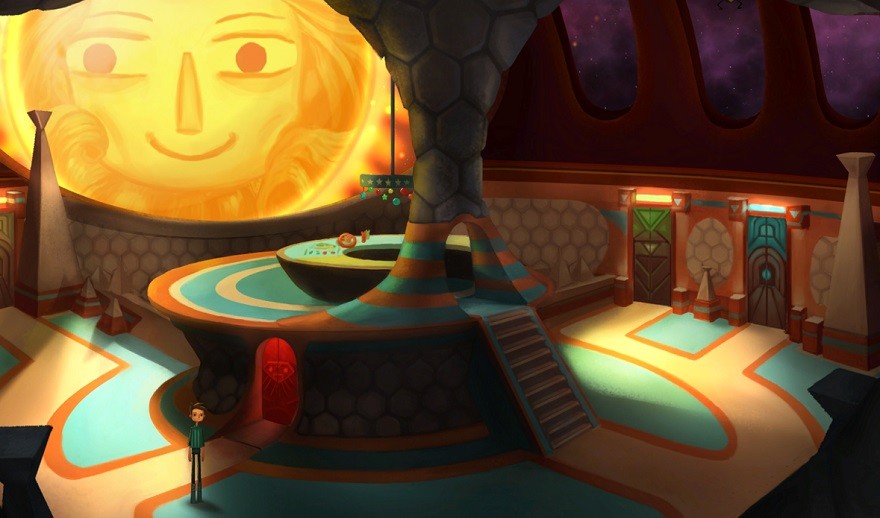 We all carry the vague “knowledge” picked up from somewhere—a simplistic textbook from grade school? a program on the Discovery Channel?—that in some unnamed ancient society in some faraway land, innocent children were sacrificed to appease the gods. This pseudo-knowledge acts as a kind of cultural anxiolytic; it soothes us by demonstrating how far we have progressed as a species. We are so much more rational, more compassionate, than our barbaric ancestors. We treat our children well.

At first glance, Broken Age is a light-as-air fairy tale. Its gorgeous storybook visuals and playful score whip together like a piece of cotton candy that sweetly dissolves on the tongue and then disappears. Unlike previous adventure games by lead writer/designer Tim Schafer (Full Throttle, Grim Fandango), the characters, writing, and puzzles do not leap out at the player in a tour de force. Instead, like any good fairy tale, Broken Age is insidious: its palatable surface belies a darker message, one that sticks with the player after the game is over, needling her like a half-remembered dream that might, in fact, have been a nightmare. The message of Broken Age is obscured behind its pleasantries, but undeniable nonetheless: We do not treat our children well. We trick them, we sacrifice them for own ends. We are broken, and in our brokenness we break the next in line.

The game is divided into two initially parallel and later intersecting storylines that the player can swap between at will. One thread follows Vella, a teenage girl from a small village within a larger pastel-infused kingdom. We enter her world on the day that she will be “honored” as a participant in the Maiden’s Feast, an every-fourteen-years sacrifice of adolescent girls to the latest in a line of Great Mogs, horrible floating masses of red eyes and tentacles. Vella has been chosen, she is told, because she represents the best qualities of her village, and yet her most compelling asset—a fiercely independent and contrarian mind—is unappreciated from the start. In her opening scenes, Vella drifts helplessly amongst family members and fellow maidens, asking why everyone doesn’t band together to kill the monster rather than appease it. She is met with patronization from all but her grandfather, who is dismissed as an out-of-touch old man as readily as Vella is seen as a naive little girl.

Vella’s predicament is what psychologist Alice Miller dubbed the “drama of the gifted child,” when children of exceptional sensitivity and precocity are tasked with caring for others beyond what is developmentally appropriate, effectively being compelled to parent their parents. (It’s not the kids’ fault for being so advanced; parents who rely too heavily on their children for emotional support implicitly encourage precocious development.) Within a dysfunctional family and community system, Vella’s talents are counted against her; rather than being nurtured and protected, they are used as justification for her sacrifice. Her parents wave and smile as she is served up on a platter to a disgusting beast, as they believe that the Maiden’s Feast prevents the Mog from destroying their village. Aren’t parents supposed to protect their children from the monster, not use them as shields against it?

When Vella employs her ingenuity to escape the Mog’s clutches, she follows the path that Miller describes for such children as they enter young adulthood. Vella feels tremendous guilt for saving herself—that is, disambiguating from her corrosive family—believing that she has doomed them to destruction. She resolves to focus all her energy on killing the Mog and, in essence, saving the world. Her identity has been foreclosed; because no one allowed Vella to be a child who could turn to her elders for safety, she sees no options for her adult self beyond continuing to be the savior she was always forced to be.

If Vella’s plight is that of the precocious, Broken Age’s other protagonist, Shay, is burdened with the weight of the coddled. He has spent his entire life on a spaceship, cared for by the ship itself via a bubbly computer avatar who refers to herself as “Mom” (but who Shay defiantly insists on calling “Computer”). Every effort is made to keep Shay safe, at the expense of him ever being permitted to experience something real. His daily “adventures” are meticulously curated by Mom; she plies her son with ice cream, gifts, and hugs, but never challenges him, never lets him make mistakes. Her intrusions push Shay away; she is too all-encompassing for an adolescent boy looking to develop his own identity. (At one point another character aptly refers to her as “the Over-Mother.”) Meanwhile, Shay’s “father” is little more than a specter, only around when Shay is asleep, and then off during the day “taking care of the ship”—or so says Mom.

When Shay finally sneaks away from his humdrum routine early in the game, he meets a stowaway dressed in a wolf costume named Marek, who convinces Shay to trade his perfect safety for the thrill of real adventure. To the player, Marek is instantly recognizable as a shifty character with at least one dark secret (if a wolf hides in sheep’s clothing, how dastardly must one be to hide in wolf’s clothing?). But Shay hardly gives his dubious mentor a second thought—after all, he has never been given the opportunity to distinguish artificial danger from the real stuff. While Vella had to grow up too fast, Shay was never permitted to grow up at all.

The journey of Broken Age is the adolescent struggle personified. Vella and Shay begin the game at opposite ends of the spectrum: Vella, the child-parent who takes care of everyone else; and Shay, the over-parented child, who cannot take care of anyone, even himself. Over the course of the game, the two must find a way to cross the chasm between them and meet in the middle, shedding the identities laid out for them by their parents and instead forging their own. Doing so means coming to terms with the painful realizations that they have been lied to and misled by their caregivers throughout their lives.

Treating our children well, consequently, does not require perfection

Schafer is not a cynic, however, and his perspective on growing up is ultimately optimistic. As the stories of Vella and Shay begin to intertwine, Broken Age suggests that childhood suffering can be metabolized into adult strengths. Shay is so used to being hugged beyond the point of reason or comfort that he is scarcely bothered by a boa constrictor trying to squeeze the life out of him (eventually the snake tires and gives up). Vella’s fearlessness—which made her such an outcast in her home village—pays dividends ten times over in the course of her adventure, and she emerges at the end of the game as a self-possessed young woman. Perhaps most importantly, Vella and Shay come to learn that their parents were not malevolent abusers, but simply as misled and confused as they were. Everyone is human, with all the flaws that entails. Treating our children well, consequently, does not require perfection; only safety, love, and room to grow.

The usual point-and-click caveats are present here: some puzzles are so obvious as to feel like filler material, one or two so esoteric as to drive the player to frustration. The division of Shay and Vella’s worlds can sometimes make what is actually a sizeable game feel artificially constricted, particularly in the first act. But these are minor quibbles compared to the mix of delight and unease that a playthrough of Broken Age evokes. Its ephemeral, dream-like quality makes the game feel less intimate and quotable than some of Schafer’s previous efforts, but if anything this is a refreshing change of pace. Rather than relying on the same emotional tricks, Schafer and Double Fine opted to tell a different kind of story; like Shay and Vella, they learned from those that came before without feeling compelled to follow in their predecessors’ exact footsteps. As a result, Broken Age is a resounding success; a charming, quietly subversive, and ultimately uplifting parable about finding beauty in the broken.