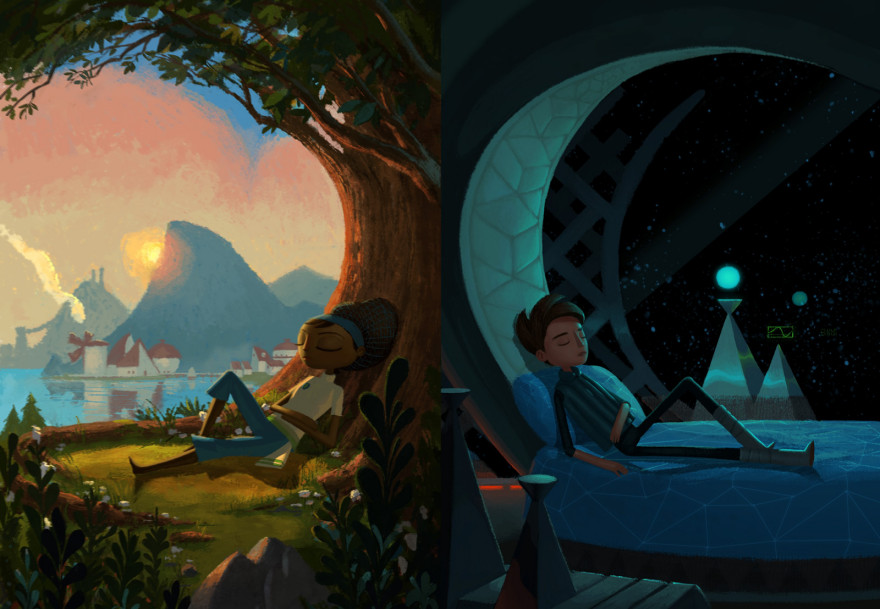 Tim Schafer is no stranger to pushing boundaries. Throughout his career, he’s stuck to his guns, whether it was within the bright confines of golden-age LucasArts, or in his more adventurous recent releases with Double Fine. But since the brightly burning revelry of Psychonauts, Double Fine’s games have gotten a bit haphazard. Most are met with an appreciative sort of shrug: “Well, that’s kind of cool.” An underworld death metal adventure I get; alien invasion tower defense I could pass on.

Double Fine’s epically anticipated point-and-click, Broken Age, changes that. It may only be halfway finished, but it’s easily Schafer’s most consistent and focused work since Psychonauts.

The game’s budget, which shattered all sorts of records while being Kickstarted, shows in its extraordinary presentation, the confidence of which is prevalent right from the outset. The game opens with the studio logo rising serenely to a simple fanfare, setting the tone for the entire game to follow. Its orchestration, full of patient woodwinds and rising orchestras, evokes classic adventures.

Upon selecting a new game, you’re given two seemingly separate characters to choose from: Vella, a young girl unenthused at participating in her town’s trying traditions, and Shay, a young boy forced to replay theatrical missions aboard a lonely spaceship. You may switch between characters at any point in the game, allowing the player to, in a way, set his or her own pace, or at least course through the narrative.

I chose Vella. My character rested under a tree while her sister called her name, and sweet sunrise-y music introduced the scene. The moment was so tender I almost wanted to let her sleep. Upon first click, she rises, yawns, and proclaims, “Guess it’s time to face the cupcakes.”

In hindsight, this initial click—or more accurately the moment beforehand—would prove to foreshadow the entire ensuing journey. I could’ve let Vella sleep her blissful state and listen to the lovely music for eternity. Her world was arguably at peace with itself before she chose to shake things up by her own volition, or my innocuous click.

Schafer must be applauded for his ability to craft such an interesting world. Vella happens upon a self-indulgent hippie commune hidden in the clouds, and a human-hating tree which one must make vomit to proceed, while Shay explores the forbidden underbelly of his mother ship, inhabited by an array of looney stuffed animals.

At heart, the author has drawn up a world that is remarkably fascinating to explore, much like wandering into a sweet dream.

There is a plot, but it’s miniscule, and by the end of Act 1, we’re left wondering the point as it only hints at a greater story. At heart, the author has drawn up a world that is remarkably fascinating to explore, much like wandering into a sweet dream.

One of my favorite novels, Phantastes by George MacDonald, accomplishes a similar feat. The lure of the story lies in the fantastic imagery of a young man wandering into fairyland rather than some terribly climactic plot. An author once asked me, regarding such the heroes who head off in our stories, “Why don’t they just stay home and have dinner?” Why do our characters psychologically need to create change, beyond the narrative requirement that they do so? Without it, the stories don’t work, but that doesn’t make it make sense.

Though I could argue both sides in my head for hours, Broken Age meets both sentiments with grace. Immediately, we find that Vella and Shay are lacking a certain resolve, and they take action to change their lives and correct their frustration. Likewise, no escort of the goddess or random owl appears to explain any part of the plot; you’re left to explore the world, and wander about it, on your own, gleaming these things as you go.

But what pleasure there is in this exploration. The animation in Broken Age is eerily gorgeous—it’s exciting that to see technology used towards such quietly dazzling ends. The characters are charming and often hilarious—look out for Jack Black’s cameo as a self-appointed spiritual guru—accompanied by Schafer’s tight writing, humor, and well-earned brevity.

What you’re actually doing in the game—pointing and clicking—is a style that, admittedly, shows its age. It may be presented with dazzling art direction, music, and storytelling, but it’s an incredibly straightforward point-and-click, with no choices affecting outcomes. At times, I felt my characters’ response selections got ahead of the game, giving me choices that weren’t relevant to what I’d been shown. Once, I found myself asking about a character’s bucket hat. I had no idea why I wanted the bucket hat, but I damn well took the bucket hat, which, of course, I needed later. This left me to wander about interacting with everything possible until something randomly worked. Recent Telltale ventures like The Walking Dead and The Wolf Among Us have been more effective at avoiding this method because of their focus on multiple story paths—there’s not always a need to collect every last item.

Broken Age succeeds, however, in being exactly what it sets out to be: a tightly woven, succinct, pleasantly told fairy tale, full of enough brain prodding to begin it all over again. A huge endgame twist both satisfies and questions the full extent of the story, accomplishing the challenging task of leaving the player both fulfilled and wanting more. If this is what the Kickstarter revolution will yield—tightly authored works with immaculate aesthetics—then we’re ready for much more.