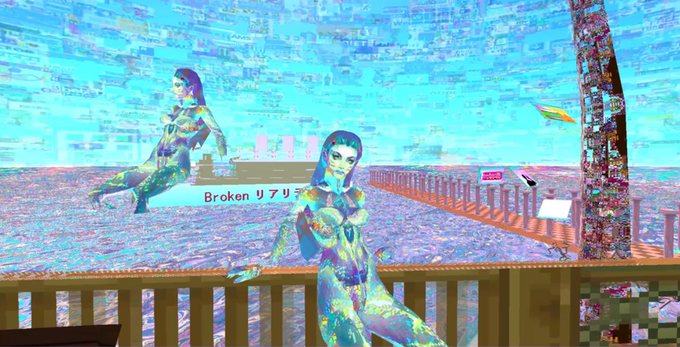 So, last time we saw the game—experiment? accident? digital hellbeast?—Broken Reality, it was more of a hyper-animated art collage than anything. A game lurked somewhere behind all the faux-Myspace popups, it was said, but there were no actual details to be found. A vague teaser trailer gave a glimpse of the attitude of the beast, and the game’s Tumblr certainly promoted the aesthetic, but anything beyond that was radio silence.

it was more of a hyper-animated art collage than anything

Luckily, it seems that Broken Reality has re-emerged from its bizarre technicolor web-cave and has come out with something a bit easier to digest, namely a Kickstarter for the final product of what now amounts to multiple years of work. None of the carefully-curated digital incoherency has been lost, of course, but it does now have a shape: a single-player adventure game taking place in a literalization of the internet, where different types of websites become individual level types with their own mechanics. It has screenshots now, too—lots of neon pink, perpetually-glitching skies, and beautifully tacky font choices—though they look a lot like the teaser trailer.

Broken Reality has no shortage of material, either. The creators have a boatload of backer rewards lined up, as well as achievements (!) for various social media milestones. That makes sense, as the game itself emphasizes the social aspect; that is, the social aspect of meeting strangers on the internet in a hazy chatroom, which they mimic with shiny avatars that you’ll meet throughout their world. And this is all without mentioning more standard videogame fare like collectibles, minigames, and easter eggs—all in tribute to their psychedelic ’90s aesthetic, of course.

If this sounds like your kind of thing, fear not: the creators of Broken Reality have promised a demo by the end of the year, and they’ve come out of hibernation with new material galore. You can support their Kickstarter campaign for another 17 days.