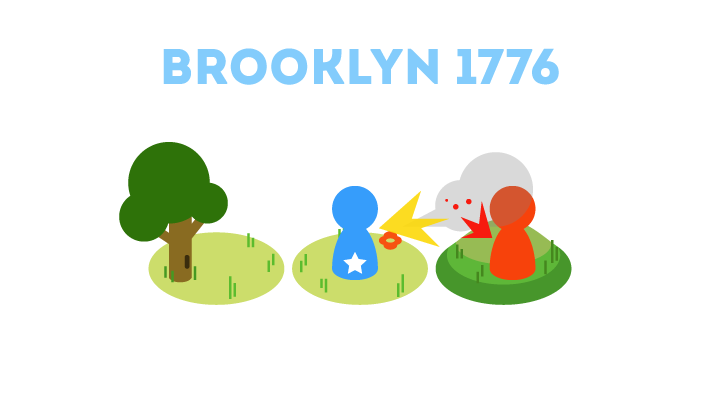 Believe it or not, Brooklyn existed before the days of beard wax, tasting menus, and lazy trendpiece shorthand.

Brooklyn 1776, which launches for iOS next week, is about those earlier days. Much earlier. August 1776 was not a calm time in American history. George Washington (maybe you’ve heard of him?) was fresh off a victory over British forces in Boston and had travelled south to defend New York City. To put it mildly, the odds were against Washington and co. But, well, you’ve heard that story before, haven’t you?

As developers Creative Good put it: “General Washington and his new, untrained American army are greatly outnumbered. Your mission is to help the Americans survive the Battle of Brooklyn fighting where you can, retreating where you must.”

not a calm time in American history.

Is it a spoiler to discuss the events of 1776? Surely the statute of limitations has expired. Anyhow, if you feel that the events of the battle—if not the game itself—can be spoiled, skip ahead.

In 2015 parlance, George Washington and his soldiers lived out the first “Why I’m leaving Brooklyn” thinkpiece. They fled to Manhattan, which even then was what men of a certain age did. Then they fled New York completely, leaving the entirety of #MediaTwitter and whatever else was in the city to the British. (That last bit is not historically verifiable but it feels true enough anyhow.)

So, the fate of New York City, America, and/or the artisanal tasting menu is in your hands. Will you commit to this program?