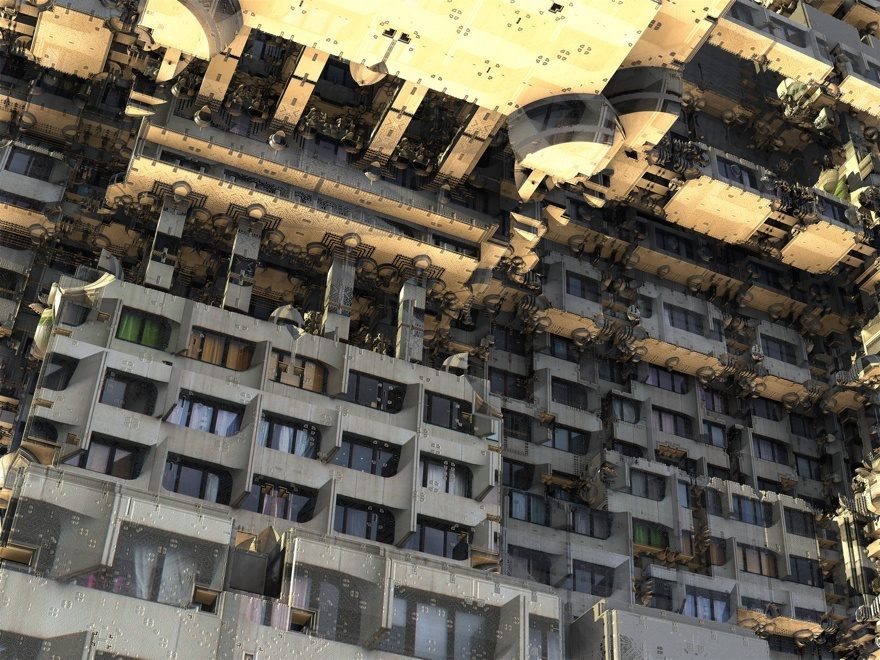 The primary material of brutalism, the oft derided and now vaguely in vogue architectural movement, was concrete. Every architectural movement has its primary materials, be they glass, wood, or steel, but in the case of brutalism concrete dominates all discussion of the style’s underlying ideas. It is both the literal and figurative building block, such that it is hard to imagine brutalism as being in any way extricable from concrete.

Designer Dantilon Brown’s “The Brutal Deluxe,” the latest in his series of generative architectural images, reimagines brutalism with a different building block: pre-existing buildings. “I set about programming algorithms to generate an imaginary city,” he told Wired’s Jenna Garrett. “One that I could populate with buildings and structures without having to draw or 3-D model.” Using photos of buildings from the 1970s, Brown’s algorithm creates fractal cities that fold in on one another and, as with the upcoming Manifold Garden, appear to extend past the horizon.

The net result of Brown’s work is a sort of exponential brutalism: cubic structures built out of other cubic structures. These buildings are at once heavy—how else to describe a series of relics stacked atop one another?—and yet light insofar as they are stacked upon one another. It helps that photography is not bound by the laws of physics.

concrete structures are not frozen in time; they are recyclable

Brown’s artwork is not as centered on physical improbability as the work of Belgian photographer Filip Dujardin, whose works often cantilever towers in any and all gravity-defying directions, but it also about unorthodox uses of brutalist structures.

Insofar as you could not live in its buildings, “The Brutal Deluxe” does not provide a working answer to the question of what to do with brutalist structures. Brown’s latest work does, however, encourage the viewer to think about possible alternate uses for brutalist structures. This runs contrary to the current trend in demolishing classic works of the genre:

In Brown’s algorithm, concrete structures are not frozen in time; they are recyclable. This is not a wholly original argument. “Sometimes a book is hard to read or a film is hard to watch but by completing it you know it was something important and worthwhile which deserved your perseverance,” writes the photographer Andy Spain. “These buildings also deserve your perseverance.” Brown’s images compel to persevere and imagine a future in which these structures are not just interesting architectural relics remembered on niche Tumblrs, but malleable parts of the urban landscape.