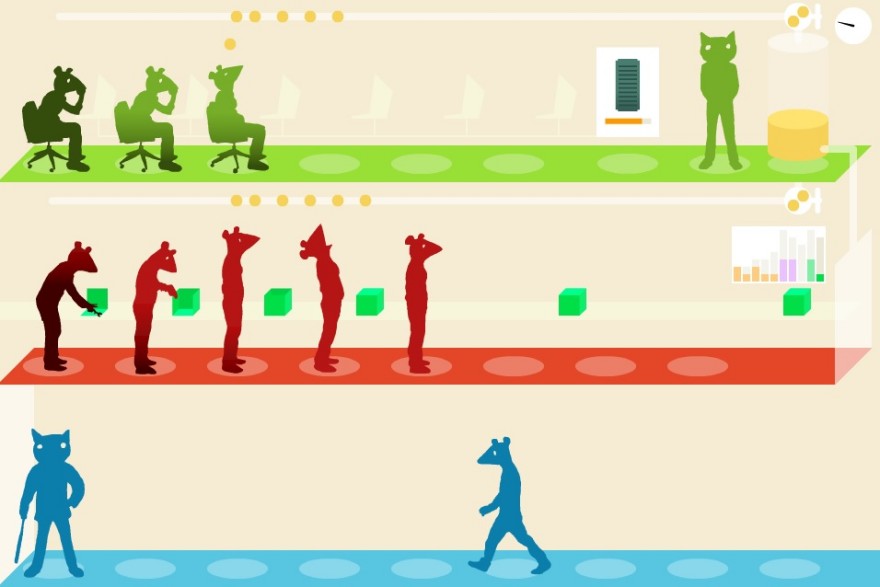 Do you know why mousetraps are, reportedly, the most frequently invented device in history? Would-be inventors looking to make a quick million took the misquoted phrase of Ralph Waldo Emerson literally, that’s why.

“Build a better mousetrap, and the world will beat a path to your door.”

That’s probably why this monstrosity was patented back in 2005. The misquotation has spread far—especially in circles of business-ready folk—and is regularly used to encourage the idea that innovation is the key ingredient to a successful product. Spoiler: It’s not.

Molleindustria, aka Paolo Pedercini, adapted this misquotation into the title of his latest videogame, To Build a Better Mousetrap, and for good reason. This “semi-abstract management game” entices you to reinvent your production lines in order to make the most money (represented by a tank of yellow goop) as possible, so that you may retire comfortably.

get your Marxist theory ready

But doing that isn’t as easy as you’d hope, due to the demands of those pesky workers. You have three tiers to play with: research and development (top), production (middle), and recruitment (bottom). You’ll want to ensure that R&D is coming up with better products as they sell for more money. But this requires more labor in the middle tier to keep up with the increase in production, which means more wages to pay.

OK, fine, so you recruit more mice and sell a more expensive product, but your money tank isn’t moving. Then things take a spin for the worse. Those who have been working under you for the longest go on strike, demanding better pay. You have two options here. Either you can increase their pay, keep them happy, at the loss of cash. Or you can drag the disgruntled workers down to the bottom, out of a job, and bring in fresh mice that are happy to work on the pay you’ve set.

Both of these options lead to your demise. If you’re paying out too much in wages then you’ll go bankrupt. If you’re playing Hot Potato with the workers then, eventually, those standing in the recruitment line will get angry enough to bang a cane against the ceiling, tearing a hole into your little factory—an all-singing, all-dancing proletariat rebellion.

So, how do you “win”? By being a good capitalist, of course! That’s right, get your Marxist theory ready. You use mouse labor at the start to get production going. Then you have your R&D team spout out enough super computers and manufacturing machines to replace all your mice. That just leaves one problem: the angry mice you’ve fired in the bottom tier. It turns out that the recruitment section doubles up as a prison, so as soon as they start banging their canes, you drag them over to their cells.

Like Emerson’s misquotation, the title of To Build a Better Mousetrap has a literal meaning as well as a figurative one, then. It refers to the need to invent a worker that doesn’t complain or get tired—a machine or computer—as well as the mousetrap that you create to keep the proletariat mice from uprising—a prison.

What could be more appropriate to celebrate International Workers’ Day than a videogame that rewards your unsympathetic and greedy capitalism?

You can play To Build a Better Mousetrap and download it for free right here.