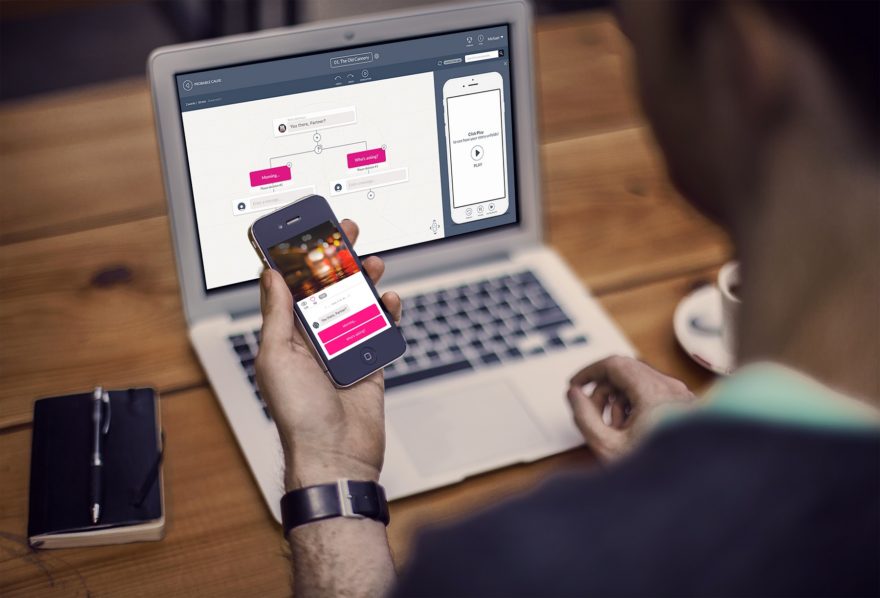 Dating back to when Alan Turing wrote his famous article “Computing Machinery and Intelligence” (1950), in which he first presented the concept of the Turing test, chatbots are a technology that has become popular once again, now being developed for entertainment, mediatic and customer services ends. From the historical chatbots (also known as chatterbots) ELIZA (1966) and PARRY (1972) to more recent initiatives like Cleverbot and SimSimi, or even the Facebook Messenger game Jessie’s Story, now there is a new chance for independent writers, game makers, and brands to work with this technology by using a new chatbot platform, Sequel.

Launched on June 2nd, Sequel is a new project from  the mobile games company Kiwi, Inc. It gives you the means to create your own bots for media and entertainment purposes, making use of leading messenger apps such as Facebook Messenger, Kik, and Telegram. Features include natural language processing (NLP) and web service integration through API nodes.

According to Kiwi, Inc CEO Omar Siddiqui, Sequel enables people to build personas, not just bots. “Whether you’re a big industry giant or a smaller indie writer, Sequel gives you the opportunity to have meaningful conversations directly with your target audience, connecting them emotionally and creating a long-term relationship in a messaging space,” he says.

Communication has drastically changed over the years, with text messages becoming one of the easiest and most common ways to communicate and connect with people. Sequel takes the opportunity to hit an audience of three billion users that, on average, open a communication-related app 17 times (or more) per day — at least once every waking hour. But considering how intimate this form of communication is, the challenge then was to create an engaging and meaningful connection when in contact with a synthetic persona. “Having a mobile entertainment and interactive background, it felt like a natural transition to leverage our expertise and resources for this new medium, focusing on entertainment and media based bots that will appeal to this audience and meaningfully engage them on the platforms they’re already using,” explains Siddiqui.

“The progression of automated conversations will be one of the great endeavors over the next few years.”

In spite of being a recent project, Sequel has some brands already working with their platform. The media and entertainment company AwesomenessTV has created a Kik bot that combines native video and chat to give fans interactive content, while the teen celebrity gossip magazine J-14 is offering a celebrity trivia bot for their readers. Thus, in order to provide truly authentic bot experiences, Siddiqui recommends that writers and brands try to reflect their personality in their chatbots, so they will have “the best shot at satisfying the emotional connection their consumer is expecting.”

On the other hand, Sequel is also a great opportunity for writers and developers that are interested in chatbot-based games and narratives. According to Siddiqui, “storytelling is at the heart of Sequel,” hence his team worked with over 30 award-winning creators — authors, screenwriters, comedians, and game creators — in order to offer quality content for the platform’s launch. For this reason, it’s already possible to find a range of conversational experiences separated by categories, including romance, adventure, sci-fi, crime, thriller, comedy, and more. One of the most popular examples is Probable Cause, formerly known as Detective Kees when available for Facebook Messenger.

Sequel’s intuitive drag-and-drop tools allow the use of text, photos, videos, audio, GIFs, emojis, quizzes, polls, and further interactivity tools when crafting your bot. While in beta, the conversations developed in Sequel will be primarily navigated by users through native UI offered through the various messaging platforms such as Facebook Messenger. However, Siddiqui says that soon they will be launching a new feature that will allow creators to build natural language into their bot experience for true interactivity, if preferred. “This is just the beginning for this medium, and there is a tremendous amount of opportunity for this technology to grow,” he claims. “The progression of automated conversations will be one of the great endeavors over the next few years.”

In terms of inspiration, Siddiqui says that Sequel wasn’t designed after any specific fictional work, even though he and his team are huge fans of Spike Jonze’s movie Her (2013). The project was actually designed after seven to eight years of experience in the mobile entertainment industry, and after creating a number of story-based games. “We realized we needed to build an entire infrastructure for our writers to support these games, from character creation to crafting storylines. This gave us an expertise in the interactive storytelling format,” he says.

Creating your bot with Sequel is free and you can get help from their tutorial videos, a forum and also a Frequently Asked Questions page.