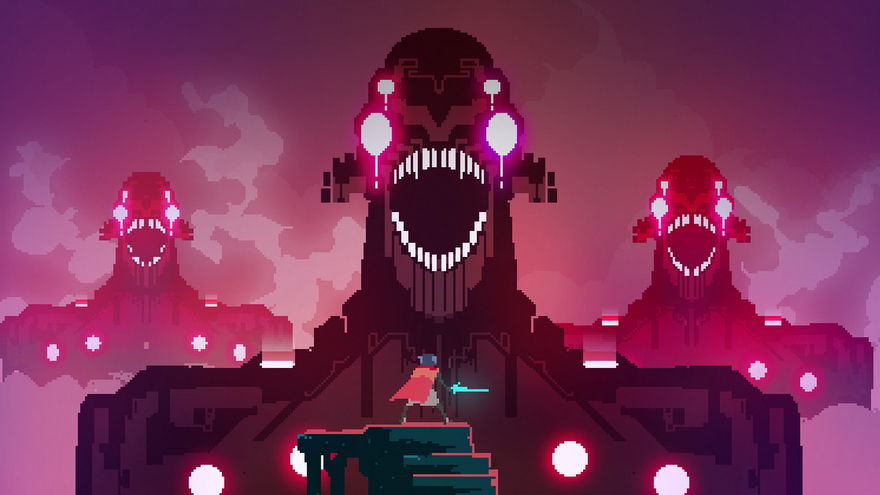 There’s a lot that can be said with silence. Some of the best tales have been told in silence: The opening of the movie Up is famous for conveying love and sorrow without words or dialogue. One of the most pronounced moments of To the Moon came with a quiet stare between two lovers.

Teddy Diefenbach, a game designer and coder with Heart Machine, told me they want to go one step further developing the entire world and plot of their upcoming Hyper Light Drifter. “We decided pretty much at the beginning as a full team we did not want any text in the game whatsoever,” Diefenbach said. “That includes dialogue that includes any sort of storytelling whatsoever. Just no text.”

“There were numbers but we got rid of the numbers even,” he told me over Skype. Slowly the team has been chipping away at the on-screen clutter to make the game strictly minimalist. Other than a few health bars and other basic UI elements projected from protagonist Drifter’s companion robot, Hyper Light Drifter leaves the focus all on the art itself.

Beyond a design choice, Diefenbach explains the decision largely came from Alex Preston, the original creator of the project, and the game’s other main artist Casey Hunt. “This is their first game production, and before that they came from the world of animation and illustration,” Diefenbach said. “So their wheelhouse is visual storytelling without words.”

But this is not to say that the game will be devoid of story or talking characters. The game’s protagonist comes from a race of drifters who travel to locations too dangerous for the world’s other denizens to collect ancient technology as a means of trade. But this same race is afflicted with a long-standing disease; through the course of the game’s early moments, Drifter strikes out on his own to find a cure.

Players will stumble upon peoples and trace of cultures beyond the enemies that want to kill Drifter. While he’ll come across characters that he can speak to or eavesdrop on, conversations will pop up as visual panels, similar to a reading a comic, rather than with text panels. In one instance, Drifter is greeted by a woman with a word of warning. But this is told with an image depicting religious bird-like creatures, followed by a sacrificial ritual, and lastly a third panel showing a looming tower in the distance.

“They are not really wordy picture bubbles,” he said. “They get to the point and they’re just giving you very simple instructions, and I don’t think you’ll ever see any sequence of panels more than up to five [images]. But you’re not going to be sitting there reading a comic book.”

Aside from interacting with characters, much of Hyper Light Drifter’s story will be told through the environments themselves. “Sometimes it will just be some dead bodies and ruins, and there will be some mystery to it,” Diefenbach said. “There’s definitely a lot of secrets to the game and […] we want the world to feel mysterious.”

All of this wordlessness syncs up well with the cryptic world Heart Machine has envisioned. “When you’re non-specific in text it’s, ‘Oh, they’re keeping a secret,’ but in a world with no words you have to infer a little bit of everything.” Drifter will travel throughout the world exploring everything from ancient temples, robot factories, and enigmatic biolabs, indicating a society that has long since passed. While it all might seem a bit disparate, Diefenbach says the world is held together by a common history. “The cohesiveness comes in the shared history of the world. And some of the same fundamental problems are plaguing every part of the world in different ways.”

Players will be able to travel through the world as one giant open space; much of it will be free to explore right off the bat. “There is a development of the character and the story. You can choose what sorts of bits and pieces you get at different times,” Diefenbach explained. “There are different major sections of the world that each have different populations, terrains, geographies, and traces of culture.”

Diefenbach explained a majority of the map is not locked behind the acquisition of new gear, as many open-world games are. Heart Machine is designing the entire game to be playable with the character’s base set of skills. Players will be able to decide which forks in the road they choose to take and will only have to turn back when faced with particularly strong enemies. “In situations where there’s an area too hard, it’s not numerically too hard like in a traditional RPG, it’s just you’re not good enough yet,” Diefenbach said.

Music, too, plays a big part in conveying the world of Hyper Light Drifter. “The music and sound is the most direct access we have in our brain to emotion, and a lot of the way the game actually plays is designed to explicitly convey moods and feelings to make you understand the experience of this character through your limitations as a player,” Diefenbach said. Players might hear birds peacefully chirping away while walking along the water’s edge, but a dimly lit facility will be accompanied by a discordant track reminiscent of Blade Runner.

Diefenbach says Heart Machine is just getting into truly developing the game’s story. Like a television series, the studio has the game’s broad narrative arc and now is working on filling in the gaps to get it from the beginning to Hyper Light Drifter’s conclusion.

“What are the beats, moments and how do we tell these very specific moments with animation, visual panels, environmental storytelling and game mechanics.” he says. “We want to make sure the world feels cohesive, that there is a lore behind it—even though that lore may not be told explicitly, it comes through that there is richness here.”