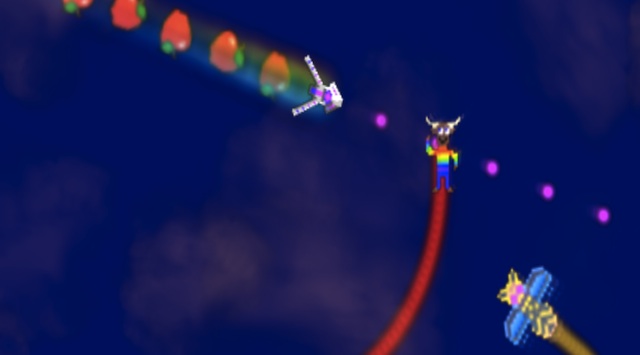 Last week, The New York Times Magazine ran an article that tried very hard to answer a simple question: Why do we like dumb games? What followed was a seven-page investigation into the phenomenon of “stupid” iPhone games like Drop7 and Angry Birds Space. While the choice of wording is regrettable, I can see where the guy is coming from, especially when NASA is centered on sending plush canaries into space, instead of, say, building the moon colony.

I wonder what the author would think about the games of Jeff Minter. So far this year, his games have sent headless centipedes, melting sheep, and most recently, a breakfast buffet’s worth of watermelon slices, into the far recesses of the silent, empty space. If the author thinks Angry Birds is stupid, the strange celestial shooter Five a Day would be outright lunacy—the sort of experience reserved for mental patients and Ron Paul supporters.

Minter is the crazy old man of the game world. The Times piece highlighted the established iPhone developer Zach Gage, who created the game SpellTower, mentioning that Gage was born in 1985. That means Minter has been cranking out games, such as the amazingly-titled Metagalactic Llamas Battle at the Edge of Time, since before Gage was born. Minter drifted onto the Apple platform after a long career burning through forgotten systems such as the VIC-20 and the Atari Jaguar.

It follows that he has a different philosophy than his tablet contemporaries. Take one of Minter’s recent blog posts. “I don’t understand people like the Angry Birds people who keep making the same game all the time. If I had a game that made me millions, I’d be thinking, ‘Excellent, now I can make WHATEVER THE HELL I WANT.’”

Minter has developed a style of high kitsch, in which the most stupid things are changed into the extraordinary.

That is almost scary to think of. Minter’s games possess a savagely unapologetic authenticity, the likes of which are rarely seen in the games industry. His stylistic maturity is the result of a lifetime of passion projects, self-indulgences, and doing his own thing. God knows what this man would do with a million bucks. There are a few things you could count on, though. It would be a variation on a classic arcade game, probably a shooter; it would be more enjoyable if you were high; and it would more than likely feature audio recordings of goats.

At least, that’s how it goes when Minter is working on a shoestring budget. Five a Day was developed in a matter of weeks in order to keep the lights on.The object is simple. You fly about shooting bad guys and collecting fruit.While the game is heavy on in-jokes, and not likely to win over many new converts, it expands on a body of work that may best be described as minotaur a go-go. Did I mention that it is profoundly stupid?

I say that in the most respectful way, with an emphasis on profound. It’s stupid in the way that a drunk manages to stumble into luck. It’s stupid in the way alchemy synthesizes gold from rot and decay. It’s stupid in the same way mold is used to make penicillin; and how magic mushrooms grow in cow shit. It’s stupid because there is no possible way this should work. If you saw Five a Day on paper, you would throw the paper away. The elements are mismatched, even tasteless. By any stretch of the imagination, it should be a train wreck. It should leave you feeling the way Peter Fonda felt after leaving New Orleans in Easy Rider: burned out and depressed, maybe even a little nauseated, with a general loss of faith in humanity.

Yet, inexplicably, the game does work. It is aesthetically pleasing. I must stop and ask: How can this look good? The bad guys seem lifted from Minter’s days programming for the Commodore 64. But they fit nicely on top of a background of clouds that could be painted by Michelangelo. Then, of course, the clouds bleed into lava lamp patterns. Your spaceship has rainbow exhaust, and strawberries are strung behind it, but even this is a source of fascination, as your character hypnotically coils like a snake at the center of the screen.

And what to say about the game’s misleading title? Anyone who comes across Five a Day on the App Store will likely mistake it for a dieting app. The app icon is a smiley face made of a banana and two green apples. I imagine more than a few health-conscious soccer moms have downloaded it, assuming it was a calorie counter. And that may be part of the plan.

If you saw Five a Day on paper, you would throw the paper away.

Confusingly, Five a Day shares its name with a program sponsored by the World Health Organization, which encourages people to eat five servings of fresh fruit and vegetables a day. In a weird way, playing the game reminds me to eat healthier, although it doesn’t seem to be associated with the World Health Organization at all. After each level, you are given a little Zen poem on the nature of fruit, though it never makes much sense. Nor does the game’s fictional calendar, which schools Lewis Carroll in nonsense, with dates like Fluttershyday, 2 Gruntle, Nicecupofteatime. Good luck keeping track of your daily fruit intake with that.

Then, there is the music—a chilled-out, Tantric, meditative outer-space drone that pulls you deeper into this place built of absurdity, causing you to take it seriously, as if you were approaching a Hindu temple, even though there are cucumbers floating around. The music doesn’t have any right to sound as good as it does. The long exhalations of chanting monks and synths stretched out to infinity unwind into blissful stillness. But the occasional cough or wheeze, the heavy breathing in the background, the clang of pinball bumpers, and beastly moans break the trance, letting us in on the joke. The music is a pastiche of irreverent noises that Minter mostly found on the public domain and stitched together.

Minter has developed a style of high kitsch, in which the most stupid things are changed into the extraordinary. It’s through this profound stupidity that Five a Day gets past being just another “stupid game” about blowing stuff up. The Times came to the conclusion that a stupid game “is at once mathematical … and spiritual: it holds you in a place between conscious problem-solving and pure intoxication.” But when playing Five a Day, I don’t become addicted to a numbers game. I’m not driven by a compulsion to act perfectly and win completely. Rather, I’m in it for my own sake: to see, and hear, and touch something mysterious—not because I’m hooked, but because I want to know what comes next.