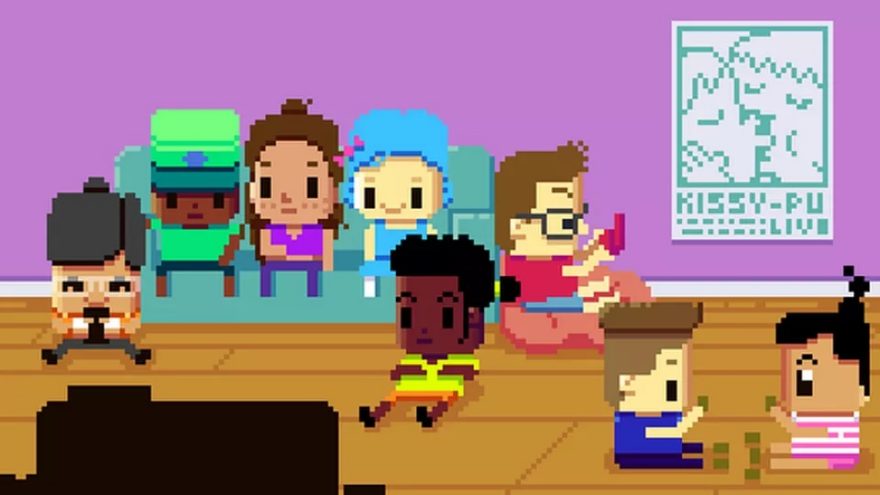 Have you ever been sexiled from a shared apartment? I haven’t, but I recall an instance of a friend in college being sexiled while he was away in the bathroom—his roommate had come in during his absence, along with his girlfriend, and left a sock on the door. My friend sat for the next 30 minutes, towel clad, in the lobby of the dorm waiting for them to finish up.

Bum Rush, the newest game by Nina Freeman, Emmett Butler, Diego Garcia, and Maxo, is about the experience of sexiling your roommates. The game does this through a combination of combat and car racing, and is designed as a party game. It’s all about kicking your roommates out of the apartment so you can participate in the horizontal tango.

take as many dates home as possible

“The origin of Bum Rush was a conversation between my collaborator Emmett Butler and I. We were talking about our experiences being sexiled during college—all the times when our roommates locked us out while they were having sex, or the times where we actually just walked in on them and then promptly left. I thought that these stories were really funny,” Freeman says. Emmett Butler, a frequent collaborator on games like Cibele (2015) and How Do You Do It (2014), contributed programming to the game which was originally created for arcade event No Quarter.

With its arcade roots, Bum Rush was designed for about four players—eight if you can get them all together for a night of controller-based fun. The game combines a dating simulator and a racing game, allowing you to race home ahead of your roommates so you can get there first. You can also delay your fellow booty-call-adventures and steal their dates, allowing you to take as many dates home as possible. Just make sure you’re in the door first, and you’re in for a successful night.

The 8-player car combat game is available on itch.io. You can find out more about the Bum Rush through the official website.