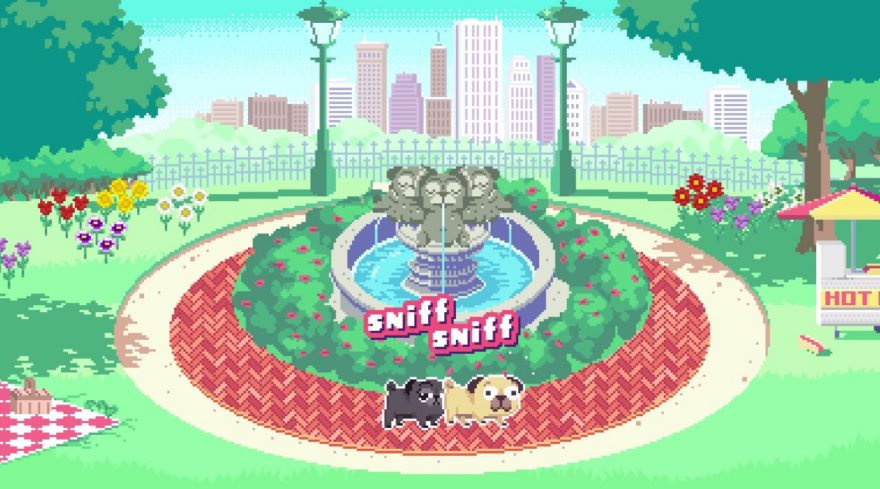 There are hundreds of dog breeds, originating from different parts of the world, big and small, hairy and bald. However, I think we can all agree that pugs are one of the cutest dog breeds out there, right? Don’t answer that, as the Phoenix-based studio SpaceBeagles will back me up on this: the team is making a game about pugs sniffing each other’s butts. Yeah, you read that right, don’t worry, I’ll explain.

Now on Kickstarter, Butt Sniffin Pugs is a co-op exploration game where you roam around Central Bark in the middle of New Yorkie City, making little pug friends. You can just run around the park if you like, do your business in the corner, dig some holes, or simply interact with objects—the game can be as chill as that. But, you can also use your special “pug powers” to unravel mysteries and treasures within the pug world, in addition to treats, power ups, and in-game currency to upgrade your park and doghouse.

a stuffed pug butt that acts as the sniff button

You can visit fellow pugs as well, and help them solve puzzles, do activities together, or give them fancy items to decorate their own doghouse with. The game’s theme and playful interactions were inspired by games like Animal Crossing and Neko Atsume: Kitty Collector (2014), with the team focusing on making the game accessible to people of all ages.


All of this sounds great, sure, but SpaceBeagles has gone one step further as you can play Butt Sniffin Pugs using a butt-sniffing trackball controller. The controller contains two main parts, a giant trackball shaped as a tennis ball, which fits the whole dog theme, and a stuffed pug butt that acts as the sniff button, allowing for a “fully immersive pug experience.” Unfortunately, this controller can only be played with at events where the game is being shown, or if you’re one of the 10 people to throw down $1,500 at the Kickstarter. That’s an expensive dog butt.

Butt Sniffin Pugs is expected to release during the first half of 2018 for PC and PS4, with physical rewards arriving to backers between summer and fall of 2017. Find out more on its Kickstarter.